Mick Bonwick shows the variation he achieved when weathering a set of 5 identical wagons. He also shows the use of a paint mask to aid in obtaining an airbrush effect.

Two members of a set of 5 Accurascale hoppers to be finished differently. A bit of a challenge, but I thought that if I tackled each one completely separately I ought to be in with a chance of success. 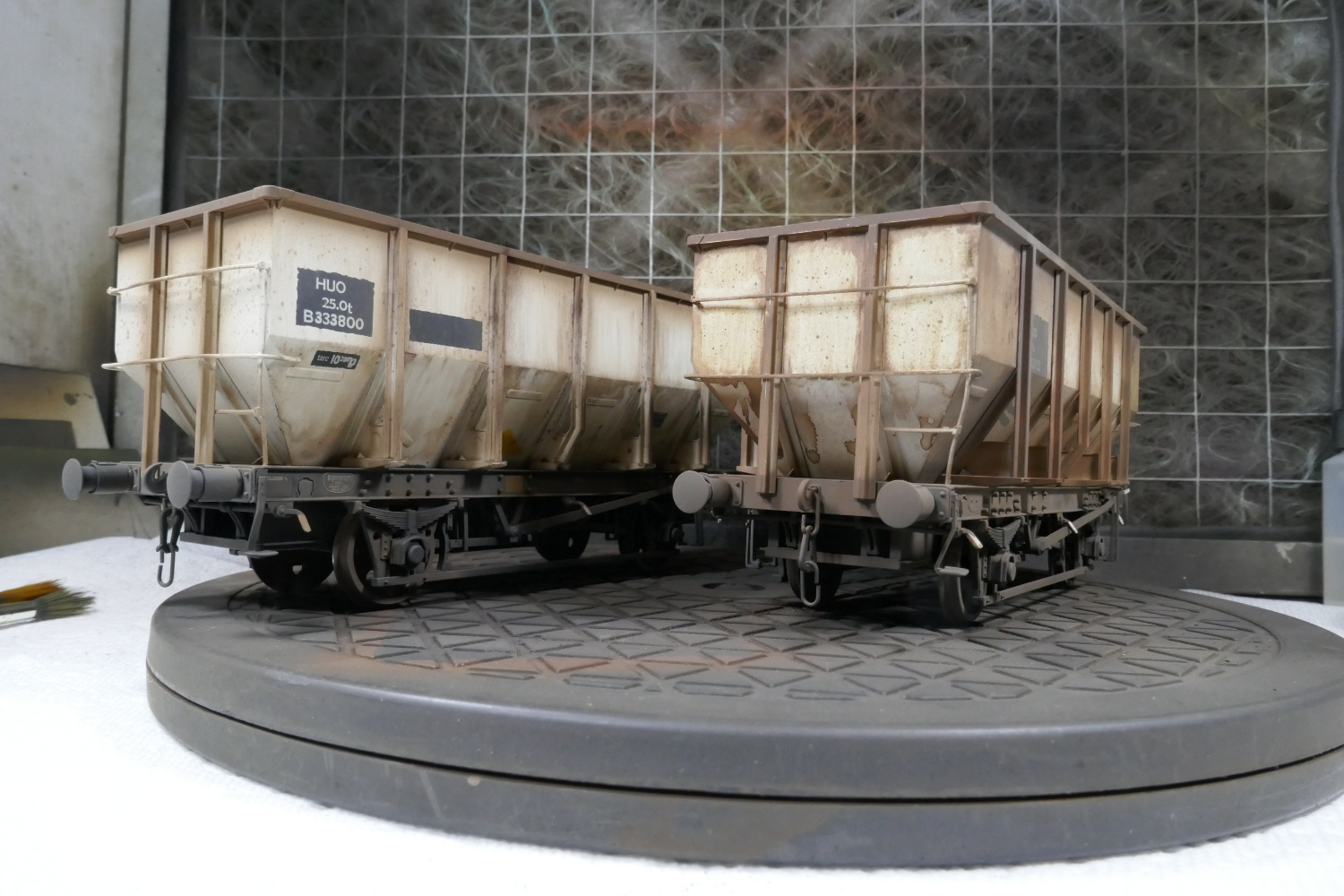 I selected the paints and pigments before I started and will restrict what I use to just those choices.

There is still work to be done on both, but progress is being made.

It occurred to me that I could do something about making initial airbrushing tasks a bit easier with these models. Most of the photographs that I have been working from show much corrosion on the strengthening ribs all around the hopper body, and for the first couple of examples I airbrushed these freehand and didn't worry too much about the slight overspray that got onto the panels. For the third example I cut out a piece of 2mm greyboard to use as a mask that would allow me to airbrush just the ribs without getting overspray on the panels. 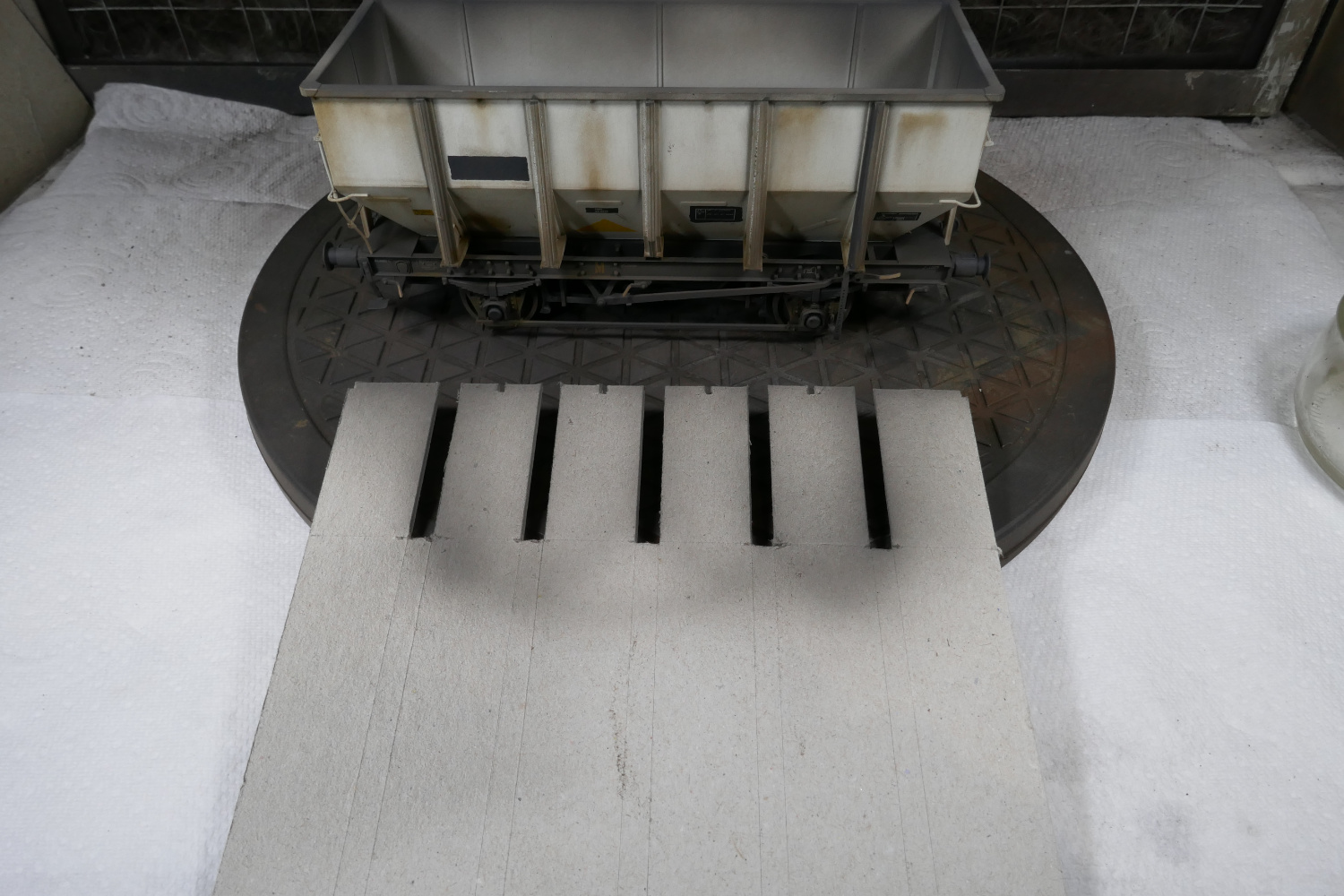 Here is the mask in place. 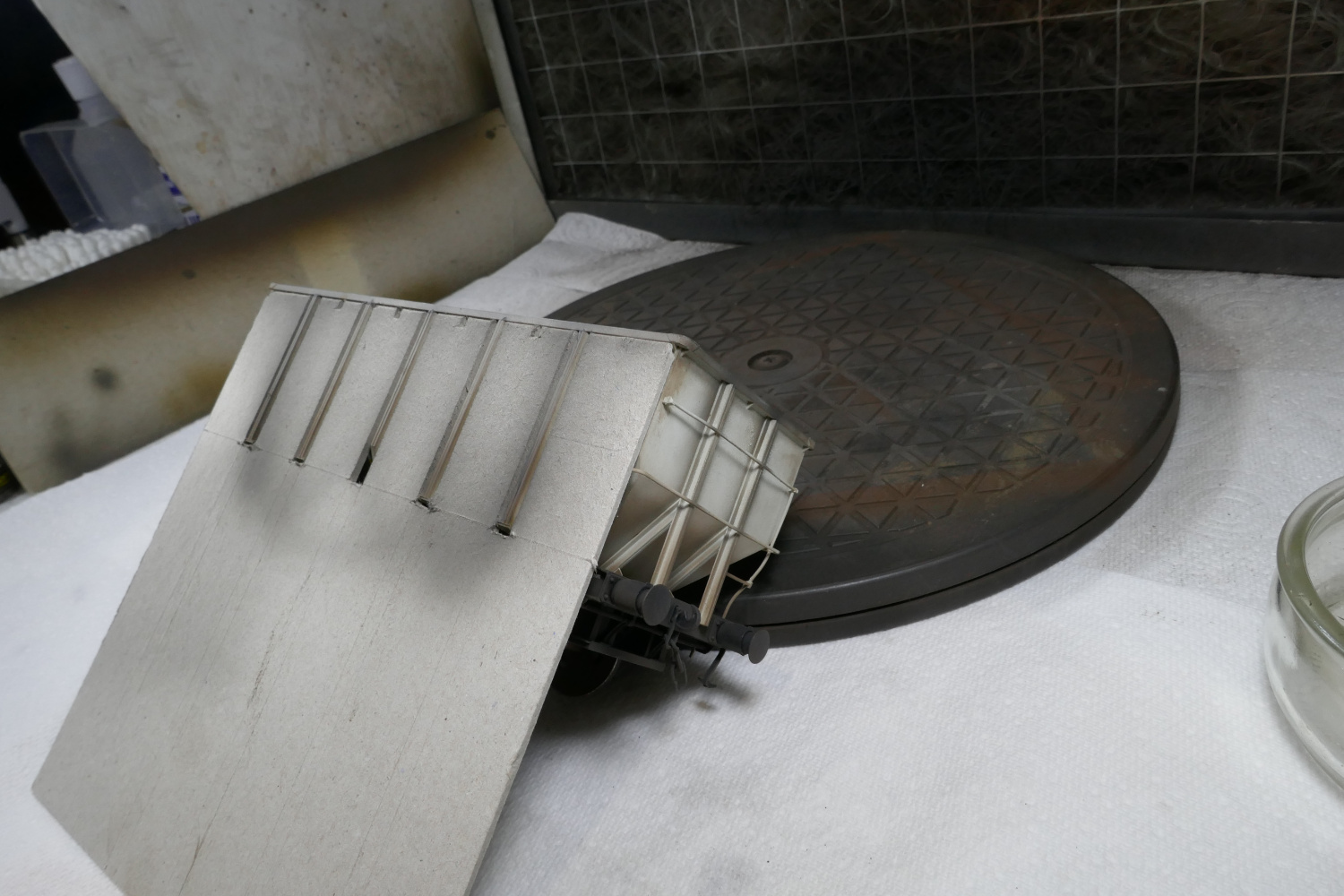 It worked well enough on the third one, so I'll use it on the remaining two as well.

The fourth one, almost completed. Things left to do are random small rust spots, painting the tops of the strengthening ribs and removing some of the grot on the various levers to reveal the white paint.

Only when looking at the photograph did I notice that this one has no footsteps at the left-hand end of the solebars. 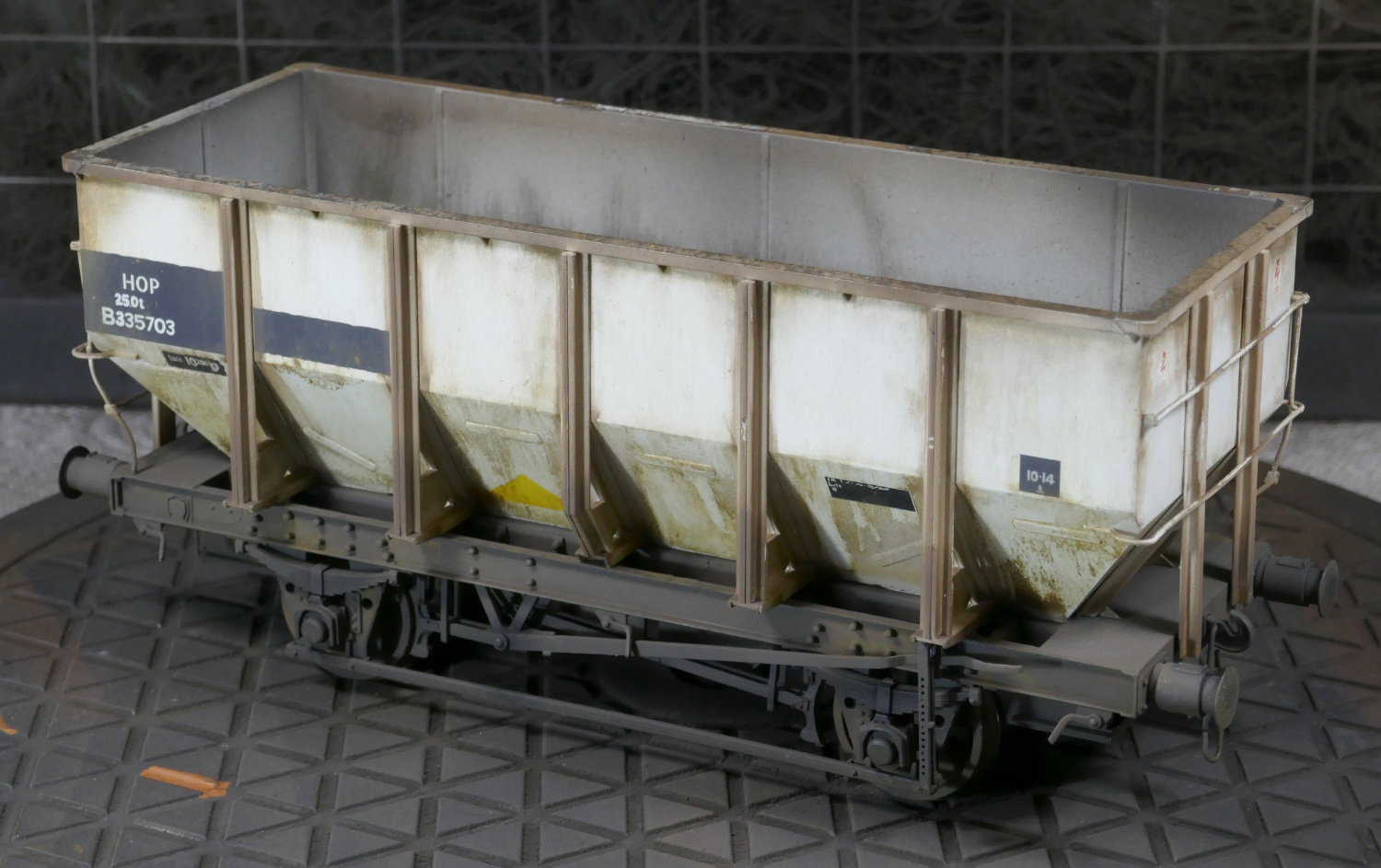 Number 5 of 5. Not perfectly happy with this one, and I can't work out why. I think that it might be the difference between the vertical upper panels amd the sloping lower ones. I'll leave it overnight and see if it looks any different on the morning. 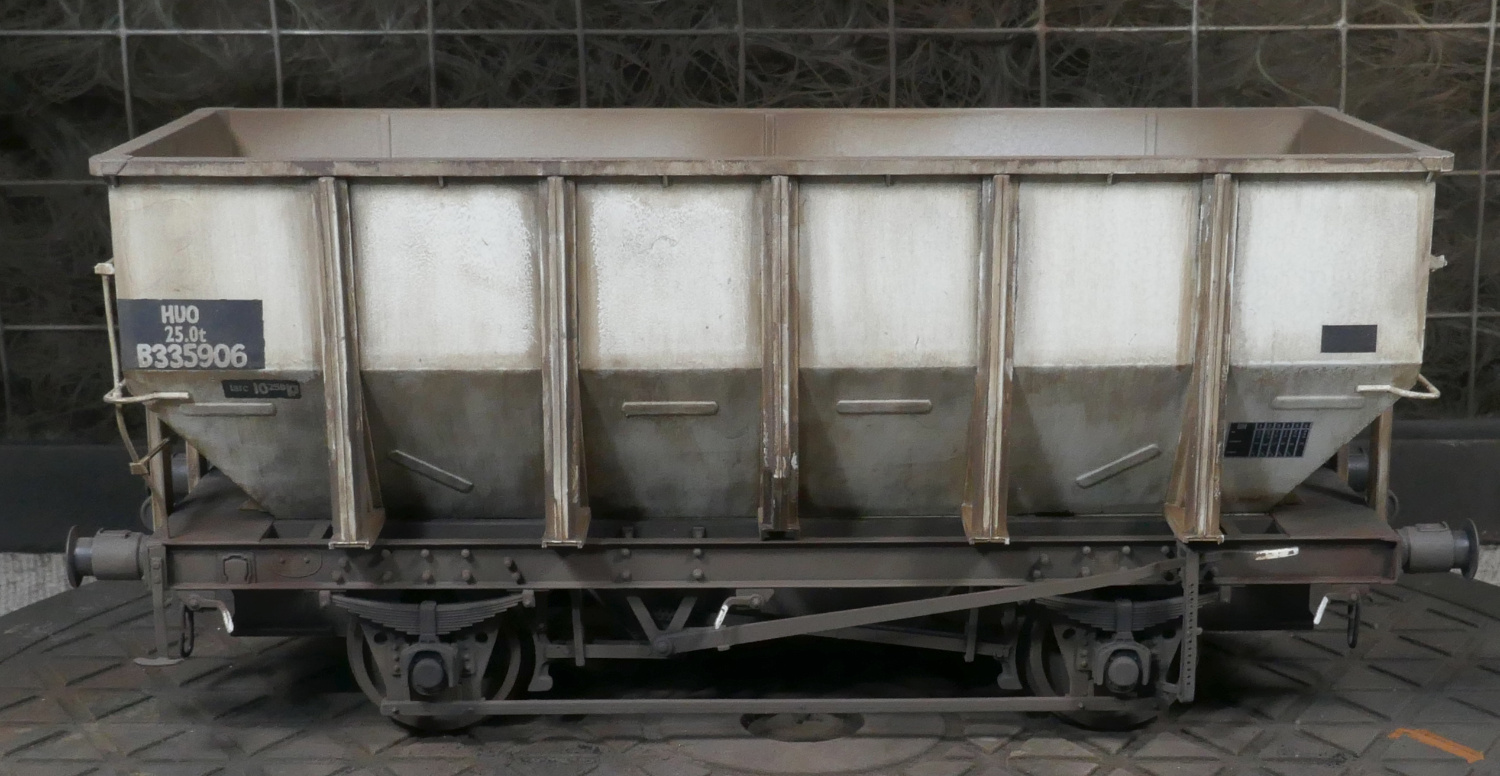 Back to the Weathering Room
Modelling Rooms
Live Sessions