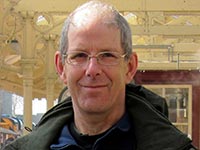 Karl has been a keen railway modeller since his early teens, working mainly in 4mm scale, EM gauge. His first major exhibition layout “Kentside”, set in 1960s South Cumbria, appeared at 34 exhibitions and was featured in issue 103 of the Model Railway Journal. He turned ‘professional’ around 2012 and has amassed a wide portfolio of projects including locomotives and rolling stock, signalling, plus buildings in both 4mm and 7mm scales.

In recent years Karl has worked closely with Brian Lewis of Timber Tracks in his production of laser-cut building kits, where Karl offers an assembly and painting service. A major project was the construction of the “Castle Cross” train shed for John Ryan’s 7mm scale layout “Over Peover”. Experience of laser-cutting techniques has been put to good use on Karl’s latest layout project that is currently on the exhibition circuit – “Hebble Vale Goods”, a 1970s West Yorkshire shunting diorama.

Writing widely in the railway modelling press, Karl has contributing material to the Model Railway Journal, for whom he is now a guest editor, as well as the Railway Modeller and British Railway Modelling magazines.