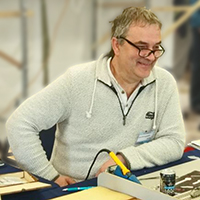 Jerry, born in 1964, has been interested in railways, and modelling them, for as long as he can remember. On leaving school he trained as a wood machinist and spent a number of years making reproduction furniture. He returned to education in 1990 as a lecturer in History at Bath Spa University before returning to the tools in the early noughties. Jerry now earns a living as a professional model maker as well as writing for the model press. He is one of the guest editors for Model Railway Journal. He is currently working on a book, ‘Railways in the Landscape; Modelling in the 2mm Scales’, for Wild Swan, due out late 2019.

Building to commission has given him experience of a wide range of scales and prototypes but his personal modelling has always been in 2mm finescale. With a wide range of interests including the Colonel Stephens lines and the Western Region of his youth, his first love has always been the Somerset and Dorset and Midland, particularly pre-1930. He is slowly building Bath Queensquare at home but can regularly be seen on the exhibition circuit with his wife Kim either demonstrating or with one of their layouts, Highbury Colliery, Tucking Mill, William Smith’s Wharf or Foxcote New Pit.