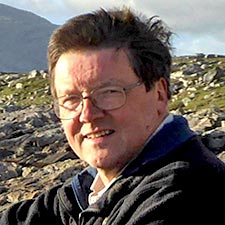 Steve has been involved in railway modelling since he started playing with dad’s old Hornby O gauge, between the legs of grandma’s grand piano in her music room. His own clockwork set came in c1959, followed by the 00 Dublo ‘Talisman’ at Christmas 1961.

An early devotee of Jenkinson and Essery, his LMS 1930s Settle and Carlisle interests of teenage years moved to MR era West Riding Lines after a University hiatus in the early 1970s, all in 00, finally settling on early 1920s S&DJR – specifically Radstock – in P4 in 1981. The decision reflects strong family roots in Somerset and Dorset, though it was made whilst living in Glasgow! The Midland railway remains a strong secondary interest, another familial loyalty, having had a great-grandfather engine driver at Stourton shed, Leeds.

After a varied ‘career’ as geologist, metallurgist and industrial archaeologist, for the last nine years Steve’s ‘day job’ has been building 4mm scale engines to commission in 00, EM or P4 gauges, first for John Brighton’s ‘Steamline Sheffield’ and since 2013, on his own account. He is now retired from commissions and concentrating on his own S&D stud, both from kits and scratchbuilds. He has had wide experience of building compensated and different types of sprung chassis, as well as ‘solid’ types; he learns something new every day in this game.