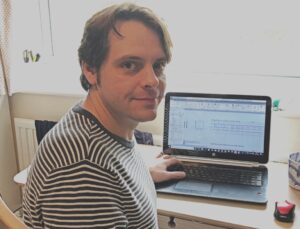 Justin has been interested in model railways since picking up a copy of the Railway Modeller in Tesco’s Hereford store in March 1989. After early teenage dabbling in OO and OO9 he has been modelling in P4 since his early twenties. His interests mainly cover South and Mid Wales along with the Welsh Marches, where he grew up, around the end of steam. Being born in 1979 he never got the chance to see this but if a time machine did exist then it would be used to take him back to the 1960s and the lineside at somewhere like Pengam Sidings on the edge of Cardiff or Worcester Sidings in Hereford to watch the trains.

In 2013 Justin set up Rumney Models after starting to produce some of his own etches and has been a semi-professional model maker and kit designer since leaving his previous career in 2016. As well as selling the fruits of his own modelling interest he also undertakes commission work for others, either building his own etched kits or producing artwork for etching and 3D printing. What time that isn’t spent in the world of model railways is spent looking after his young daughter. Justin has professional qualifications in both Autodesk’s AutoCAD (2D) and Inventor (3D) and enjoys nothing more than using these types of tools to produce new models.