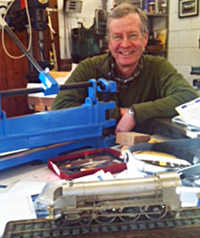 Kevin came to model railways and the 7mm arena in the early 1990’s, via the tried and tested baby boom route of model boats (pre radio control, round the pole hydroplanes) and aircraft, radio controlled slope soarers and scale gliders. The latter became so large and expensive that a cheaper option was full size gliding! All the kits were sold to fund the purchase and I was left looking for another modelling challenge This presented itself during a chance visit to the West end and a look around the IMREX show, I was fascinated by what was available in 7mm.

A move from South London to Hertfordshire provided the space to consider a 7mm layout and inspired by “Holiday Haunts”, work began with Watford club colleagues on a new project, “Bucks Hill” The layout had it’s first outing to Telford in 2006, and in common of layouts of this size it is still a ‘work in progress’.

Bucks Hill, and the rolling stock required, gave the perfect excuse to build locos ad nauseam, and early retirement from work in the city has accelerated the pace of both the layout and the locos!