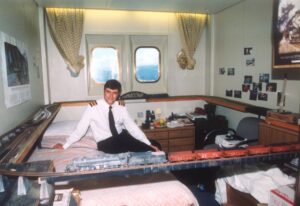 Andrew Thompson has had a lifelong interest in railways, with a particular emphasis on steam power which was heavily influenced by a childhood in South Africa surrounded by working steam locomotives. Other than the usual childhood model railway his first “real” layout was built whilst working at sea and occupied the perimeter of his cabin which is where his interest in weathering began. After being dissatisfied with his unguided first attempts, he booked himself onto a course at Missenden Abbey to gain knowledge and techniques from experienced tutors where he gained confidence to experiment and develop his own style. Although mainly interested in US railroads, due to the vast variety of rolling stock and prototype photos, an occasional British subject makes it to his work bench. Examples of Andrew’s weathering work, along with reference photographs can be seen on his Flickr account, a selection of these are shown below.