I have already tried to weather one of these but am not completely happy with the result, which can be seen below.

The next attempt will use the following products:

The model will be depicted at a later stage in its life but still before TOPS. 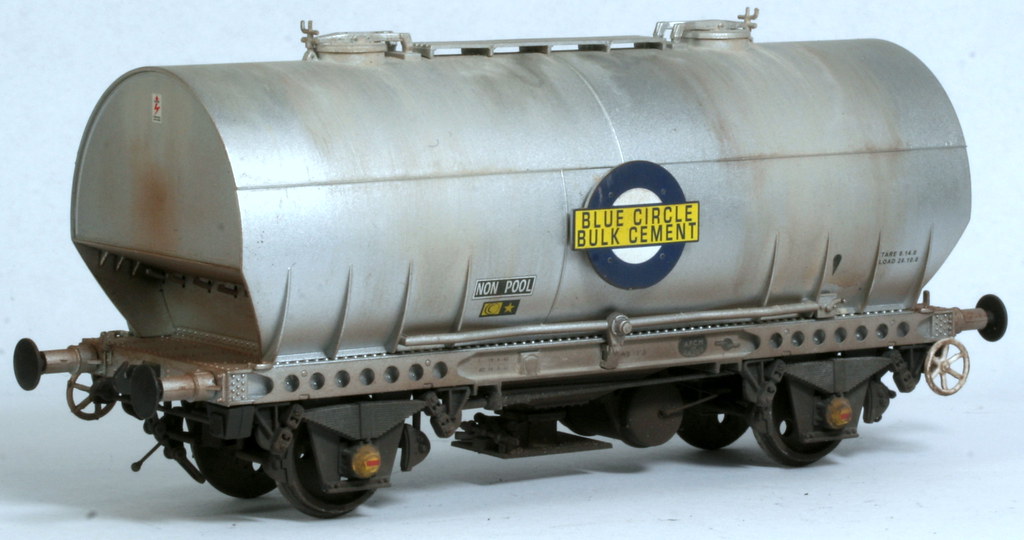 The bright shiny aluminium bodies of Cemflos soon turned dull through the oxidisation of the metal surface. My original plan was to represent this by using Testor's Dullcote, but a friend mentioned that he planned to apply a coat of Lifecolor Tensocrom White Oxide to his models, so I thought I'd unashamedly copy his idea. Very little of what weathering I do is my own idea, nearly everything is copied from somewhere or somebody else.

Tensocrom acrylic paints are semi-opaque colours that are designed to allow you to put on transparent layers to slowly discolour the model surface. Each coat applied will deepen the effect. It's difficult (for me) to capture the effect on camera, but here is the finished result: 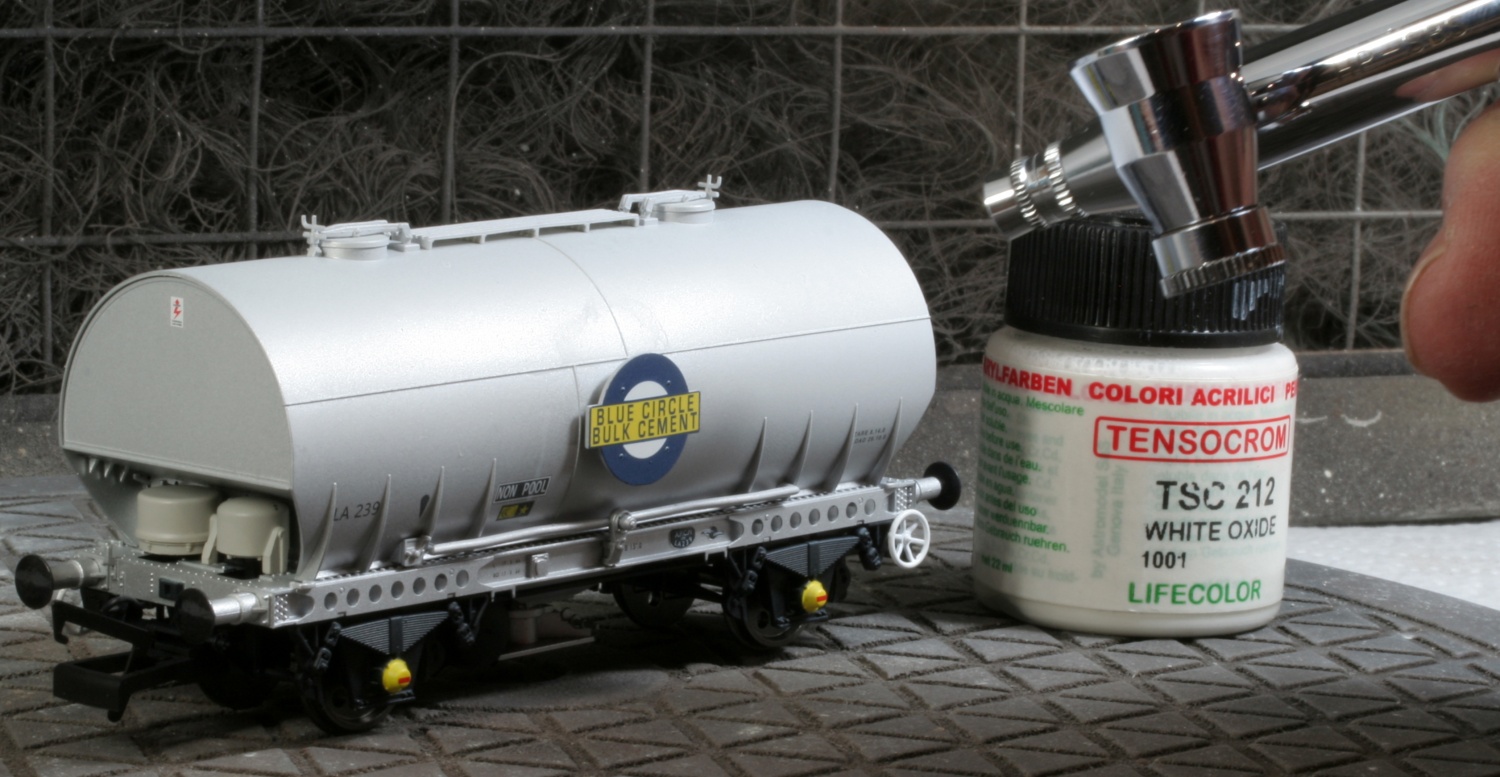 Not a weathering topic, I know, but I thought that I'd remove the supplied couplings and fit the cosmetic screw couplings before proceeding. They look so much better that I took a photograph. Or two. 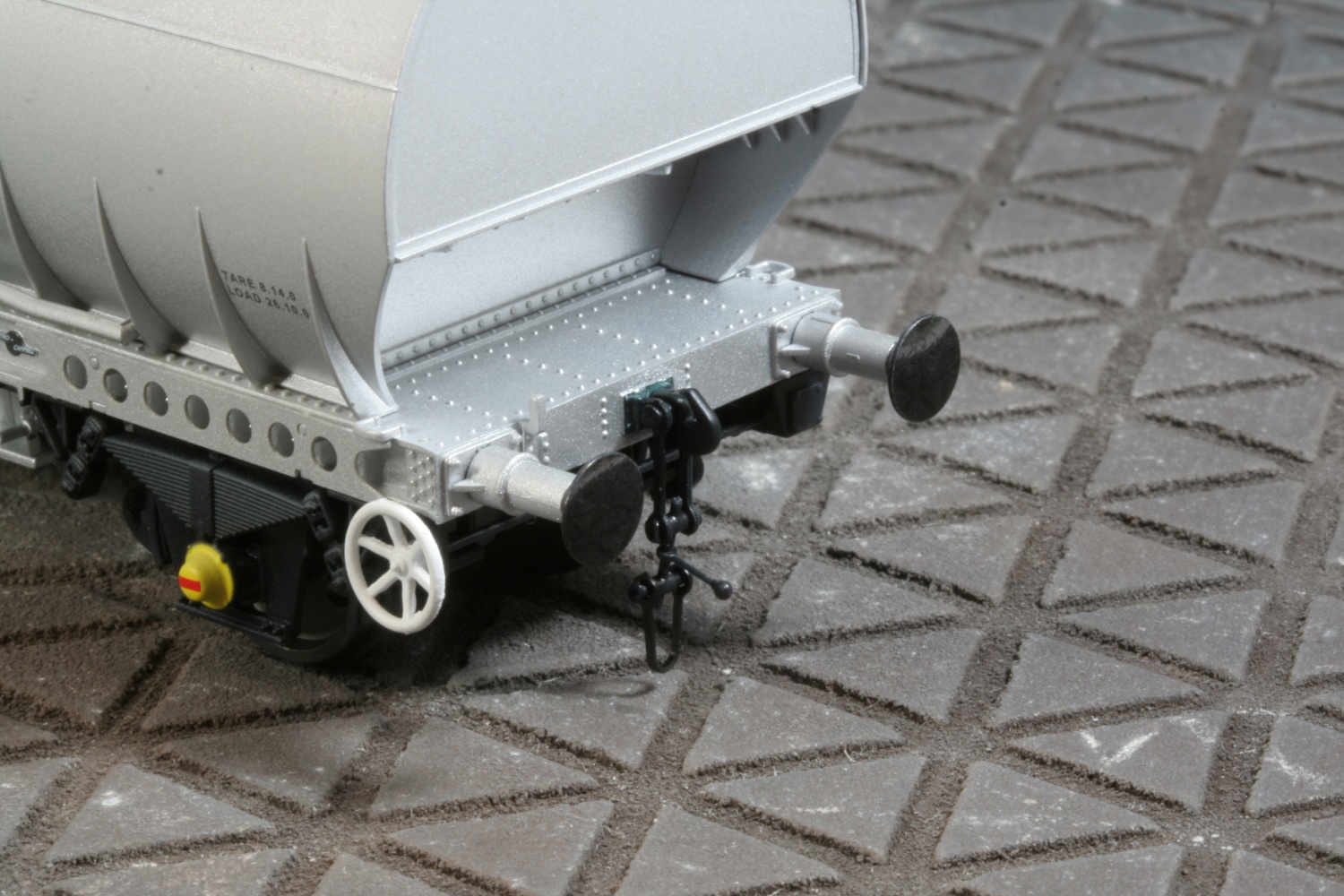 Preparation for the cement application. Materials to be used now are Testor's Dullcote and Lifecolor N. Europe Dust pigment. I searched through many pigments to find a suitable grey cement powder colour, and this one is the closest (to my eye) I could find. 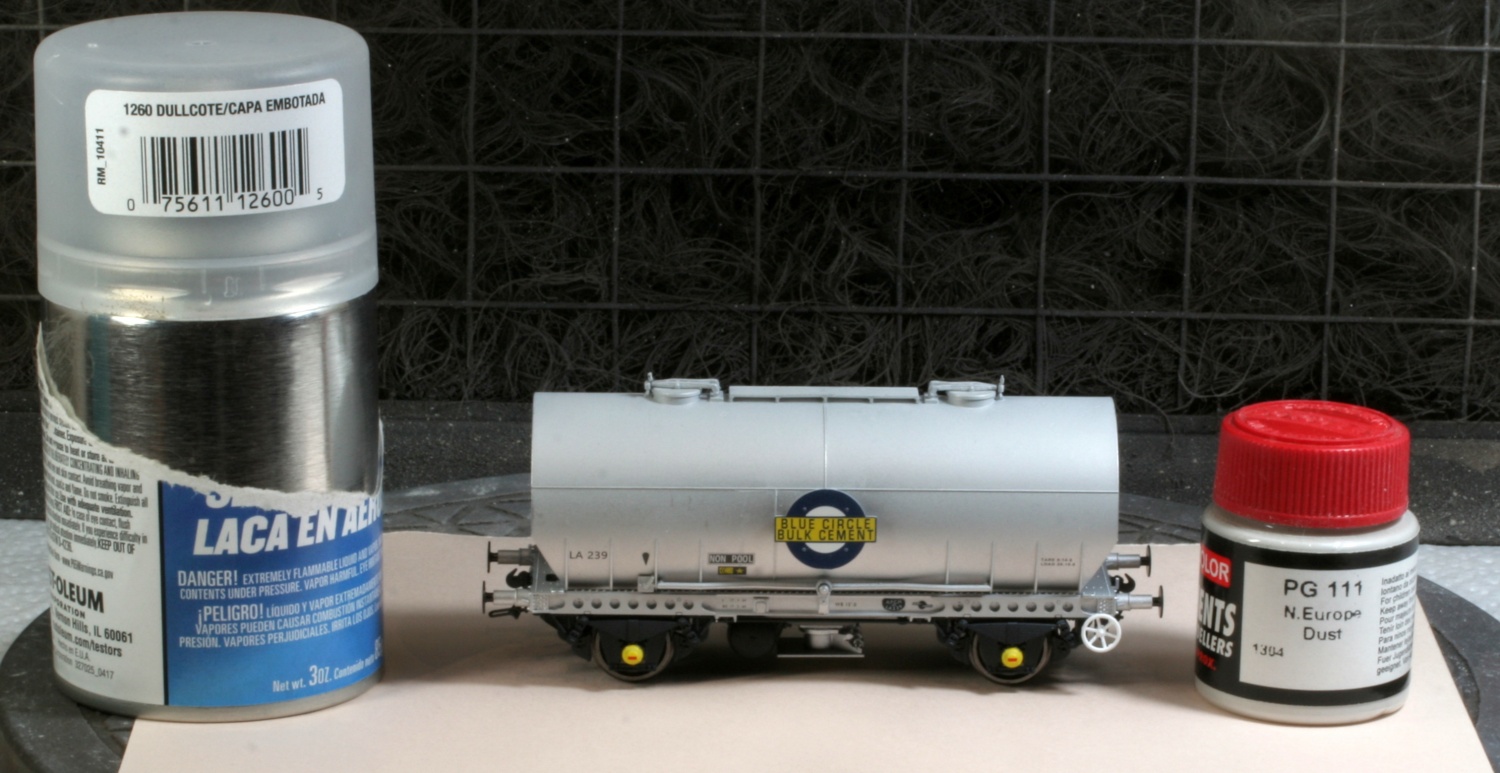 The idea of using the Dullcote is to create a quick-drying sticky surface upon which the pigment can be plonked. Sorry for being technical.

No attempt has been made to be careful where the pigment goes because the Dullcote dries very fast, and the pigment needs to land on it while it's still wet. You would have been amused had you been able to see me struggling to spray Dullcote, plonk (sorry again) pigment and take a photograph all in the space of 10 seconds.

It looks an absolute mess so far, but things will improve. Honest! 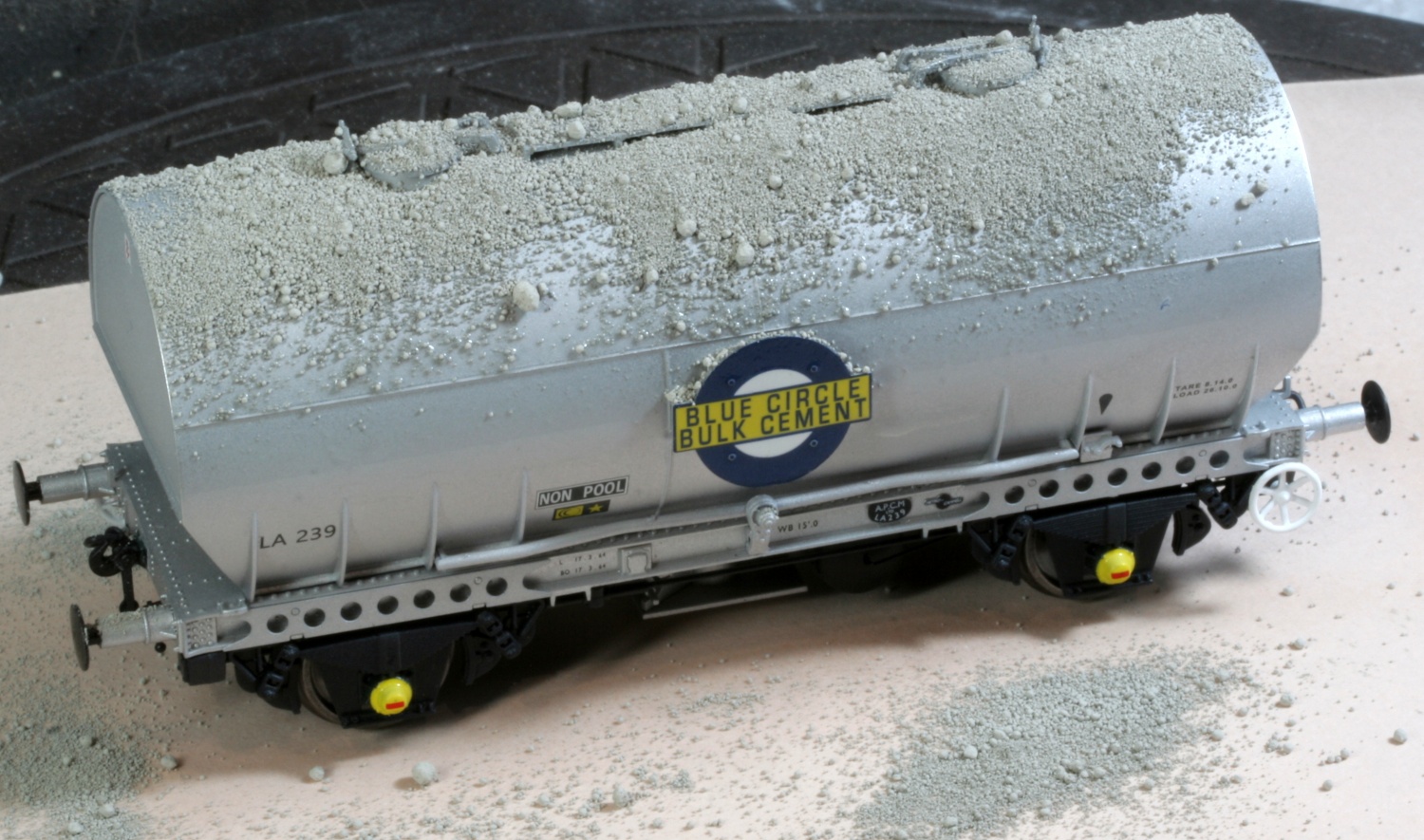 Once the Dullcote has dried, the pigment is well and truly stuck. Working with an old filbert brush, the mess is being reduced to smaller lumps by the simple expedient of rubbing the lumps down to size. The harder you rub the smaller they become. Notice the piece of paper in a nice shade of pink. This is being used to capture the powder falling off the tank, so that it can be re-used. 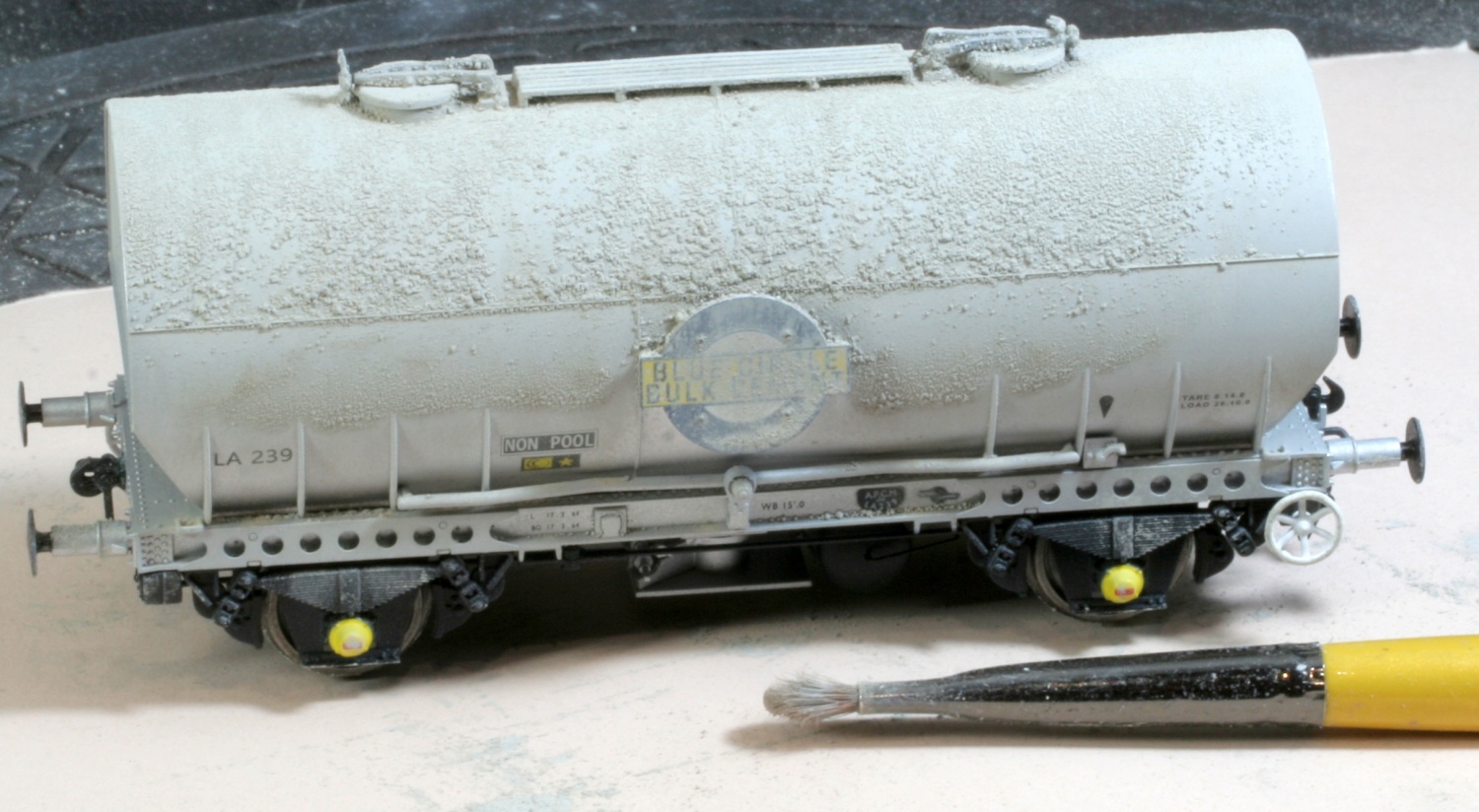 Cement dust builds up gradually on the tank sides, forming a crust as time and precipitation both do their work. In places the weight of this buildup is too much for the grip of the gunk on the metal of the tank, and lumps fall off. On the model this effect can be shown by using a cocktail stick, or similar precision tool, to chip away at the previously created mess. The pointed end will remove small areas at a time, or it can be used at a much shallower angle to reduce the height of the lumps more quickly than an old brush. 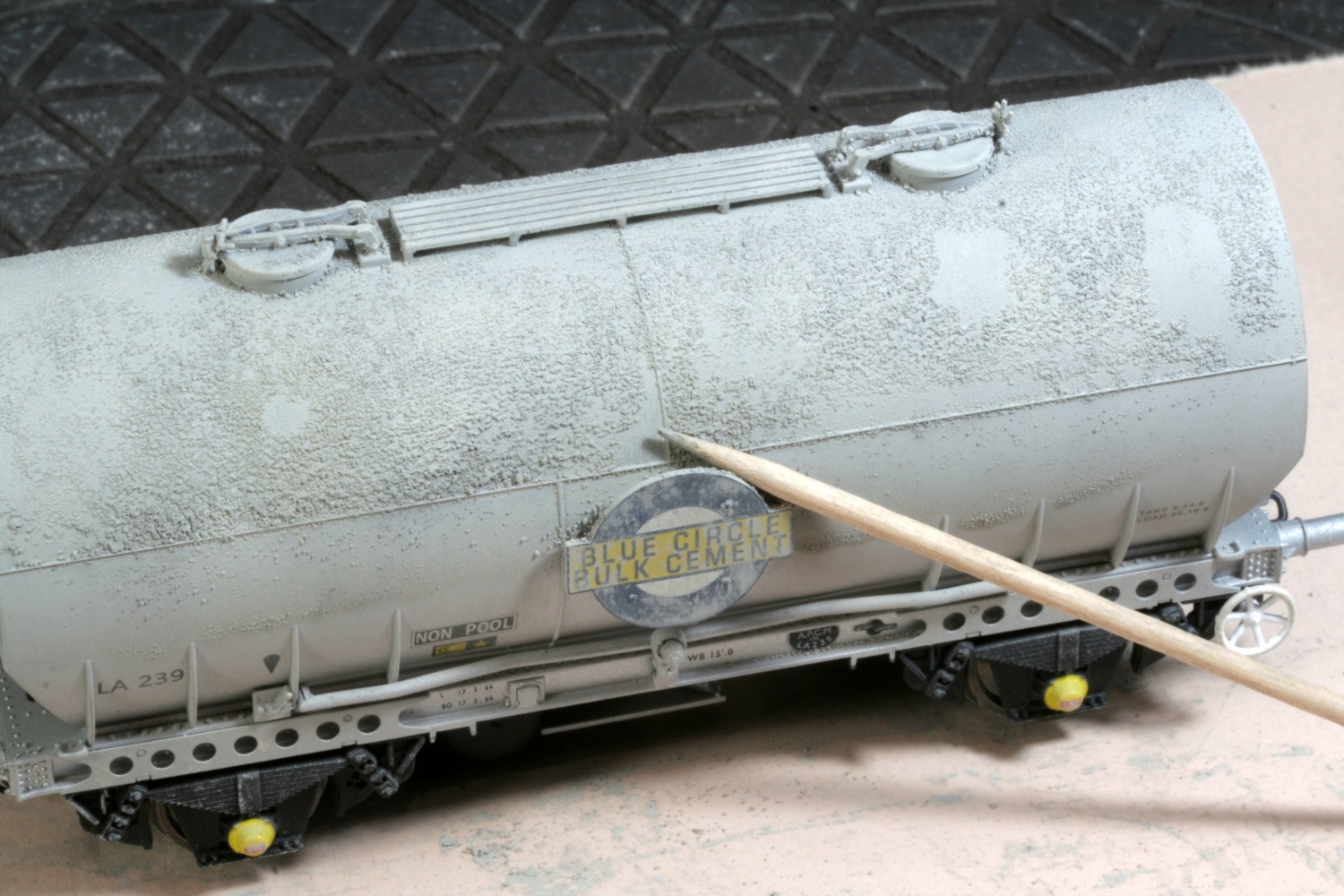 It's the turn of the underframe. Railmatch Weathered Black and Frame Dirt are used in this case. A first layer of frame dirt is followed by a second layer of weathered black/frame dirt mixture, giving some variation of colour to random areas of the chassis.

The holes in the underframe strengthening plates presented a small problem. How do you get an even coverage of paint on the solebars that will be seen behind the plates? I put the nozzle of the airbrush right up against the holes and sprayed through them onto the solebar. The consistency of the paint allowed it to spread far enough inside the gap to cover the whole area.

The Railmatch frame dirt was applied first, to give an overall tint to the whole area. Wheels were done by using the airflow from the airbrush to turn the wheels and then applying the paint and watching the excess fly all over the inside of the spraybooth. Railmatch weathered black was mixed in with the frame dirt and then randomly airbrushed over the top to introduce a change in tone to the accumulated grime. The photographs show this much better than (my) words can explain:

Final touches include the wiping of the pigment brush, which still has a residue of light grey pigment on it, over horizontal and protruding surfaces. Note that this does not mean that the brush is dipped in pigment at all, we just make use of the miniscule traces that are still embedded in the bristles. A bit like dry brushing with paint.

The Blue Circle board on the tank has also been rubbed with the pigment brush, in vertical streaks, to replicate the dusty buildup of cement dust.

Only after the photographs were taken did I discover that I had broken one of the hatch latch handles. Be warned!

I have now realised that I have not photographed the darkening process for the area around the hatches that arises from lubrication of the hinges and latches, and the vehicle is now with its owner. The second photograph below will show you how this appears, but on a much later PCA.

Back to the Weathering room