In 1133, William de Missenden, the Lord of Missenden manor, founded a monastery for a community of Augustinian canons.  De Missenden invited the canons from the monastery of St Mary’s in Ruisseauville, a village in North-East France near Calais.  The monastery became the home of the first abbey in the county of Buckinghamshire and the second Arrouaisian community in England, after Warter Abbey in East Yorkshire.

There is no plan of the medieval monastery but some idea has been constructed from documents, excavations and comparisons with similar monastic houses of the period.  The Abbey church was on the North side of the main building, running from west to east, as was typical of the period.  It was apparently highly decorated, in a romanesque style. The church housed the largest bell in Buckinghamshire, which weighed more than 2.5 tons.

After the Dissolution of the Monasteries between 1536 and 1541 by Henry VIII, it became a country house, being remodelled at various times in following centuries.  It was extensively remodelled and enlarged around 1806 in the Regency Gothic style.  It remained a country home until 1946 when it was sold to Buckinghamshire County Council for use as an adult learning centre. 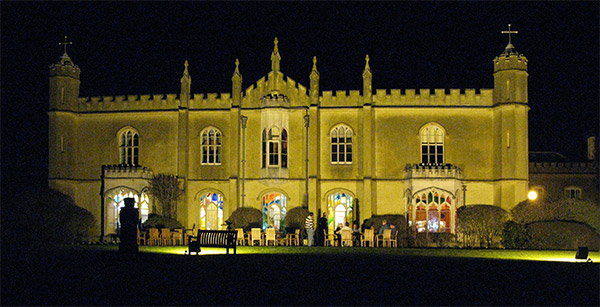 In 1985, it was gutted by fire.  However, it was completely remodelled between 1985-88 by the County Architect, Paul Markcrow, to include medieval fabric remains which were incorporated in to the interior along with surviving fabric from previous builds.  Some of the Regency Gothic plasterwork was reconstructed in the garden and dining rooms.  In the garden room, dining room and lounge there is contemporary stained glass by David Pearl; surviving medieval stained glass roundels, imported for the Gothic rebuild, have been incorporated in to the former western entrance.  Externally, all of early 19th Century work was restored following the fire with render, channelled to appear as ashlar.

The Abbey has been owned by Buckinghamshire New University since the mid 1990s. It is now used as a conference centre as well as its earlier purpose for residential and non-residential adult learning courses.