Sometimes we end up learning as much from mistakes as we do when things go smoothly. In this case the problem was a silly mistake made at a Missenden weekend that went unnoticed for about three years. At some point during the fitting of the boiler and smokebox I must have put the components down and accidentally turned them around. The result was a Duke with the dome and chimney too far forward. 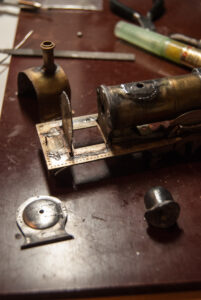 The first step in recovering from this mistake was to disassemble the bits that would need correcting. First the dome, smokebox door and smokebox wrapper were removed.

As can be seen from the picture there was plenty of cleaning up to be done and a slight amount of damage to the smokebox wrapper which is a thin, half etched section.

The smokebox wrapper can simply be refitted the other way around to resolve the positioning of the chimney, however the boiler was a bigger problem. It  would be harder to remove and turn, plus there is a large slot in the bottom of the boiler at the firebox end to allow the motor and gearbox to be fitted. Turning the boiler was not going to be an option, it was going to have to stay in place or I would need to make another boiler.

Rather than make a new boiler I decided I would try to use the current boiler, patching the hole the dome had occupied and creating a new one further back. 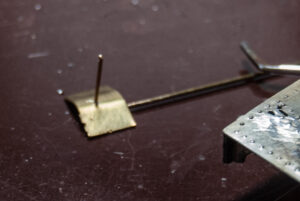 I took a small section of brass and curved it to match the radius of the inside of the boiler. I then drilled a hole for a pin in the centre of the patch. I used a brass lace pin with the head on the inside of the curve as the head could be used to pull the patch up as I soldered it in place.

I also soldered a rod to the panel to help be manoeuvre it within the boiler.

Once completed I manoeuvred the patch into the boiler, after first cutting down the length of the lace pin to allow it to fit. 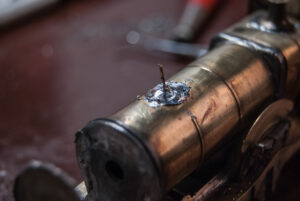 Using pliers to hold the patch in place I applied liberal amounts of flux and started to run solder around the edges of the hole. The heat from applying the solder allowed the rod I had soldered to the patch to drop off, exactly the effect I had hope for. If it had stayed in place it would have made fitting the motor difficult.

I puddled lots of solder into the hole to build the level up to the outside of the boiler.

With the hole filled with solder I cut the lace pin off and began the process of filing the boiler smooth. 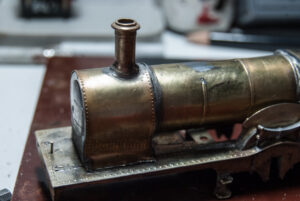 It took some time to get a reasonable finish, but in the end I got something that was acceptable.

In this picture the smokebox door and wrapper have been replaced but not fully soldered. I would need to fix the front boiler band, rather than try to patch it I decided to file it off and fit a complete new band. I would need to be careful not to  melt the solder in the patch. I opted to use low melt solder to attach the band and very short applications of the iron.

The dome would be the next thing to tackle. I drilled a new hole for the dome and placed it on the boiler. 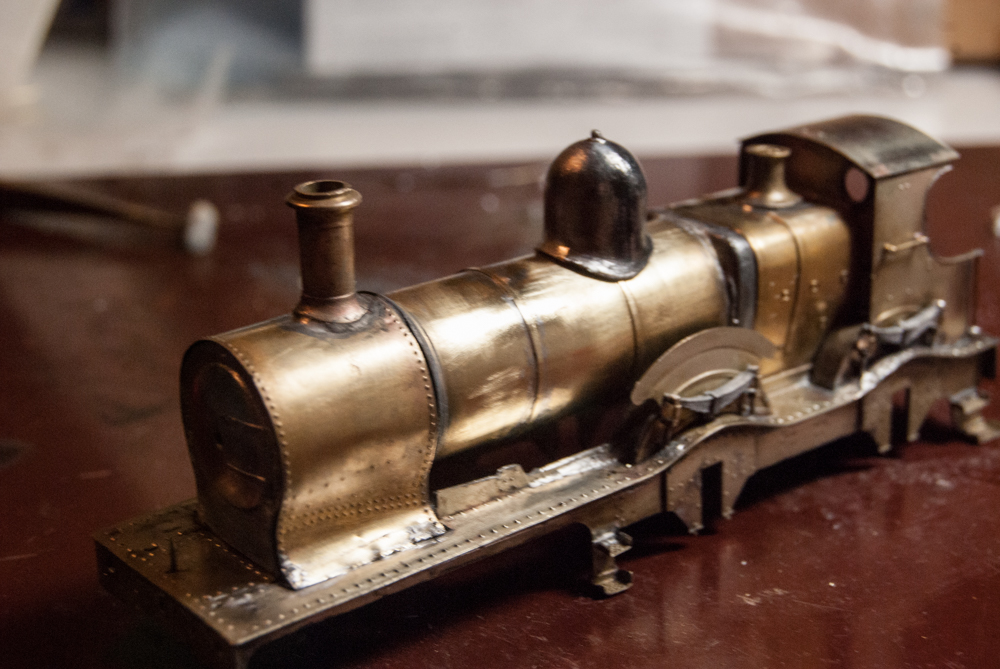 This allowed me to mark the extent of the rear boiler band that would need filing away to allow the dome to sit down on the boiler.

The finished result might not win any prizes for the best made model, but it did teach me a lot. Not least to pay attention and triple check things before adding the soldering iron.

At least its looks something like it should and I am happy with it. Here you see it after I have applied paint, transfers and name plate. It still needs varnish and weathering to tone it down.

Back to metal working