Set 732 is to be depicted as a BR(S) liveried pull-push pair fairly late in the life of its green livery. An example of similar stock was found in a Michael Welch book containing many images of the southern region at the end of steam.

The plan, such as it is, is to produce a weathered pair of coaches that shows a build-up of dirt around panel and window edges, a very dirty underframe and roof, but cleanly maintained sides.

The dirt build-up will be achieved using MIG Productions Dark Wash, the underparts will be coloured using Railmatch Sleeper Grime mixed with their matt black, as will the roof but in different proportions.

Before starting, everything will be well mixed in jar by my trusty Badger battery powered stirrer. The wash will be applied using a rigger brush, and I'll let you imagine what the chopstick rest will be used for.

The coaches are by North Star and were, I believe, painted by Larry Goddard. The challenge is to make them dirty without ruining an excellent paint finish. Is that possible? 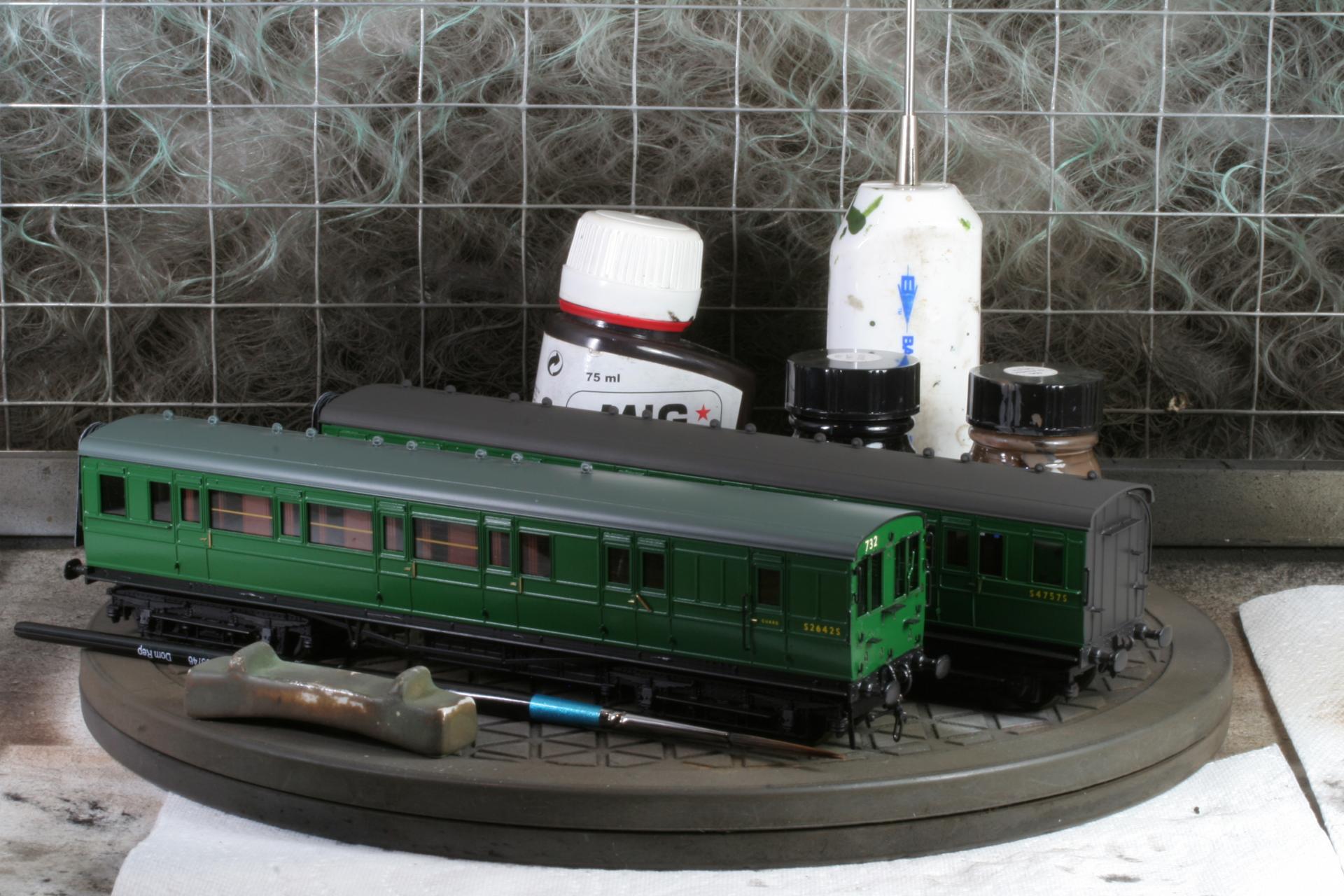 A rigger brush, a thin wash and capillary action are all used to get dirt into all the edges and corners of panels, doors and windows. By dipping the brush into clean thinners (white spirit) and then into the wash (MIG Productions Dark Wash), a good volume of fluid is ready to be transferred onto the model. The inevitable large blob on the end of the brush is removed by touching the tip against the rim of the bottle and the tip is then gently touched to a corner of a panel or junction of door shut line, window, panel, etc. Capillary action will take the fluid from the brush and run it into corners and along edges as if by magic. 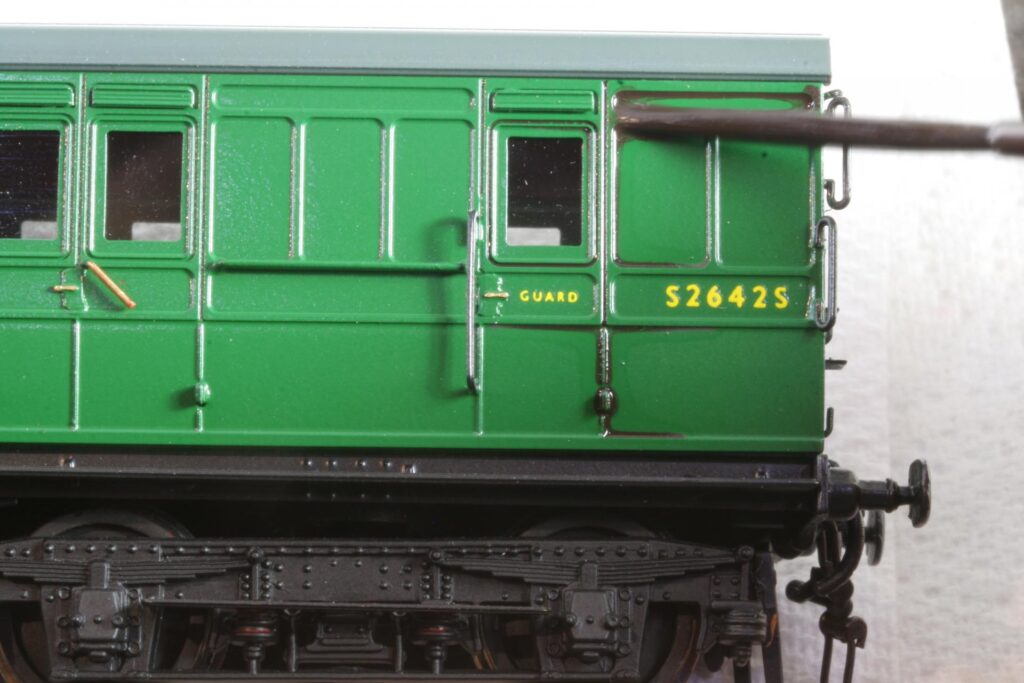 The process continues. When hardly any fluid transfers from the brush to the panel corner, it is time to replenish the brush with thinner and wash. However hard you try there will inevitably be blobs appearing in some of the panel corners. Leave them! They can be dealt with later - at least 15 minutes later. Don't worry (at this stage) about uneven application, either, it will all be sorted in a subsequent step. 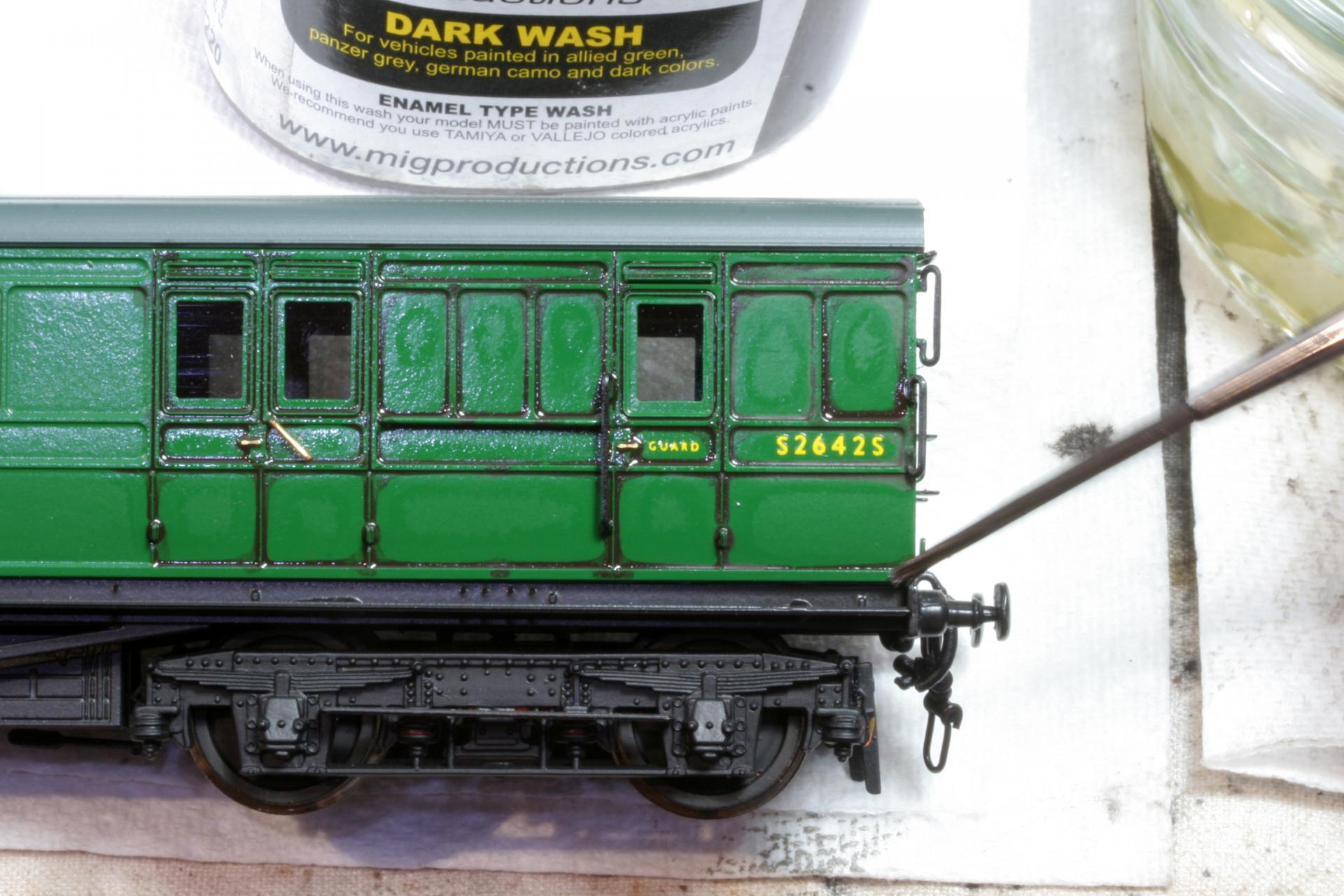 The application of dark wash to panel edges has been allowed to dry for at least 15 minutes. You can see from the photographs below that the colour has lightened and the white spirit has evaporated. 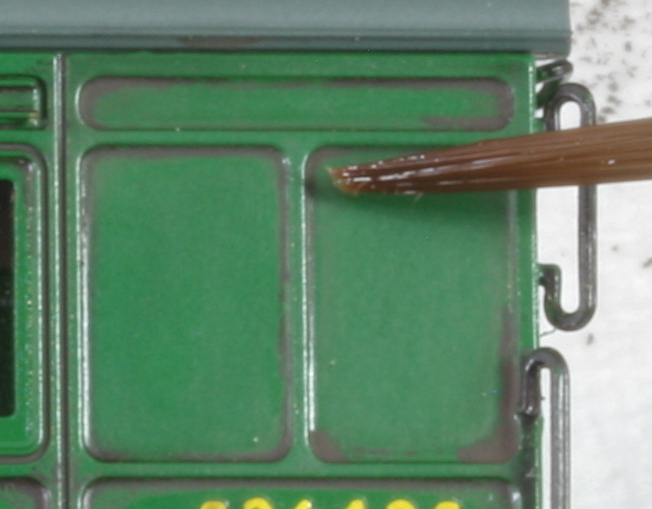 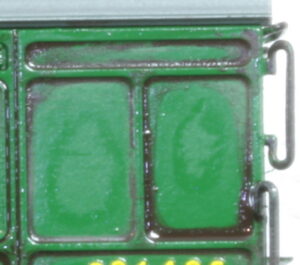 To remove blobs and other unwanted paint after application surpluses, I use the rigger brush dipped in clean white spirit and gently lay the bristles as flat as I can against the areas to be treated. By moving the tip of the brush around, I can absorb the only-just-dry paint from the appropriate areas, leaving just the panel edges discoloured with dirt. 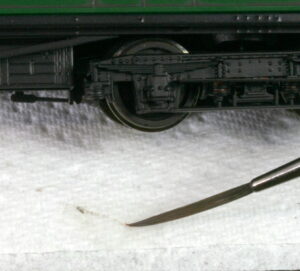 With each portion treated the removed paint is immediately removed from the brush by touching the tip to a paper towel.

A recycled piece of protective foam strip from a worktop is used while airbrushing the underframe. This helps access to the inside underframe details on the opposite side of the coach to the one I'm painting.

The whole of the underframe will now be treated to a thin coat of Railmatch Sleeper Grime, starting with the bogies. The air flow from the airbrush is used to turn the wheels and paint is then ejected for long enough to coat the whole wheel as it turns.

When the whole underframe had been airbrushed it looked too pale, so I added some Railmatch Weathered Black to the mixture and airbrushed a thin coat of the new colour combination over the top of the previous layer. In this photograph you ought to be able to see that the left hand end of the chassis looks a bit darker than the right hand end, which has yet to be completed.

The roof has been removed for painting, something which is not usually possible with ready to run coaches. With these two coaches the roofs are a good interference fit into the sides, so this removal is easy.

The roof has been airbrushed with a mixture of Railmatch Weathered Black and Roof Dirt to represent a well-used example. Care was taken to avoid paintless shadows behind the torpedo vents by painting those areas first. Only once the vents and surrounding roof were painted did the process move on to the remainder of the roof.

If airbrushing the roof of a ready-to-run coach, when the roof is not easily removed, a card mask can be used to protect the sides from overspray while this is being done. Masking tape could be used, but I find that a piece of card does the job just as well when weathering. It's a different matter if you're airbrushing the main colour in the first place. 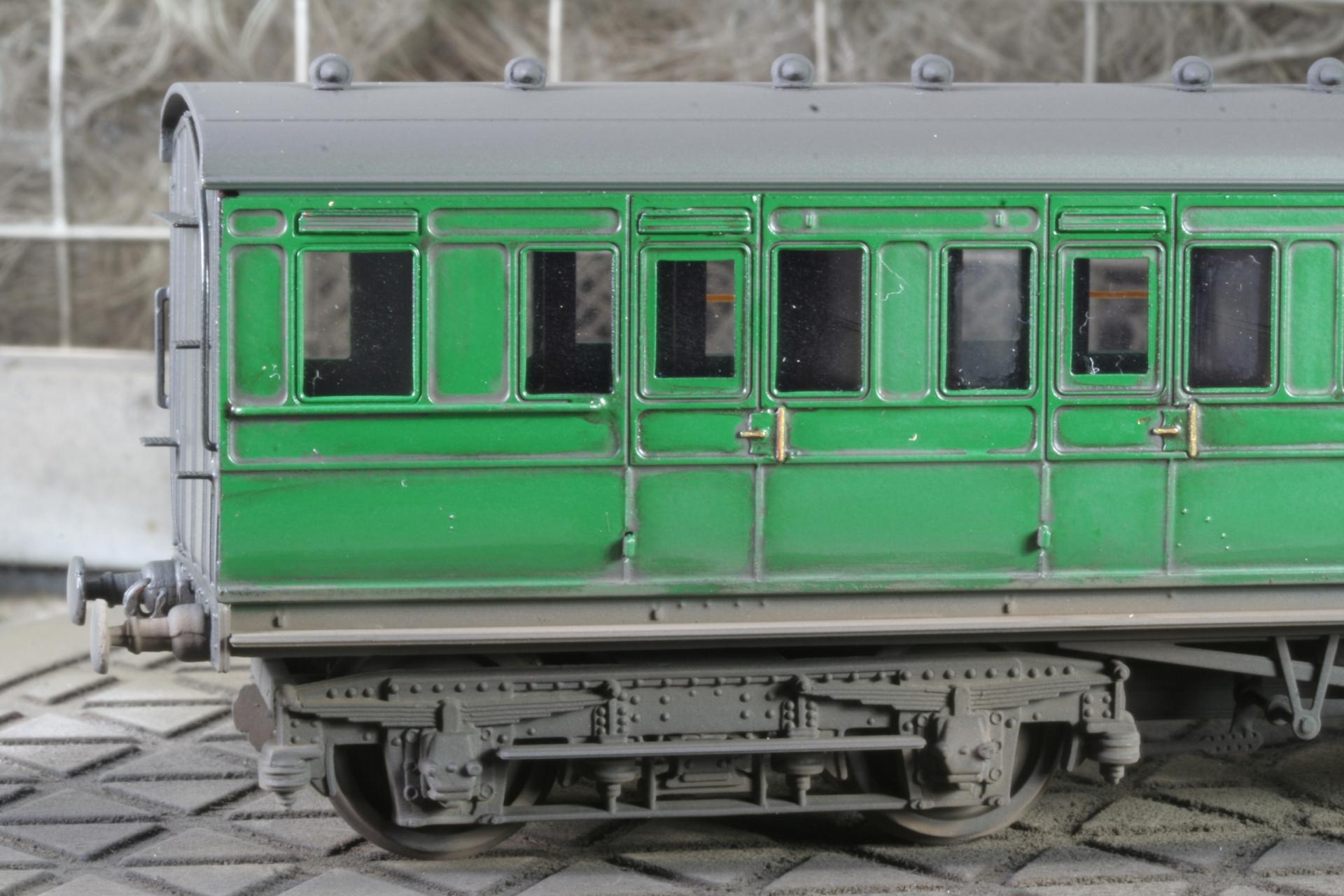 A coat or two of Railmatch Frame Dirt mixed with Weathered Black has been airbrushed over the ends of each coach, graduating the colour from darker at the top to lighter at the bottom. No tiger stripes, just a gradual change of tone.

All but finished now, just remains to add some lighter colouring to the footboards where feet fall. I'll use MIG Productions Rubbel (sic) Dust for that - just a touch applied with a filbert brush. 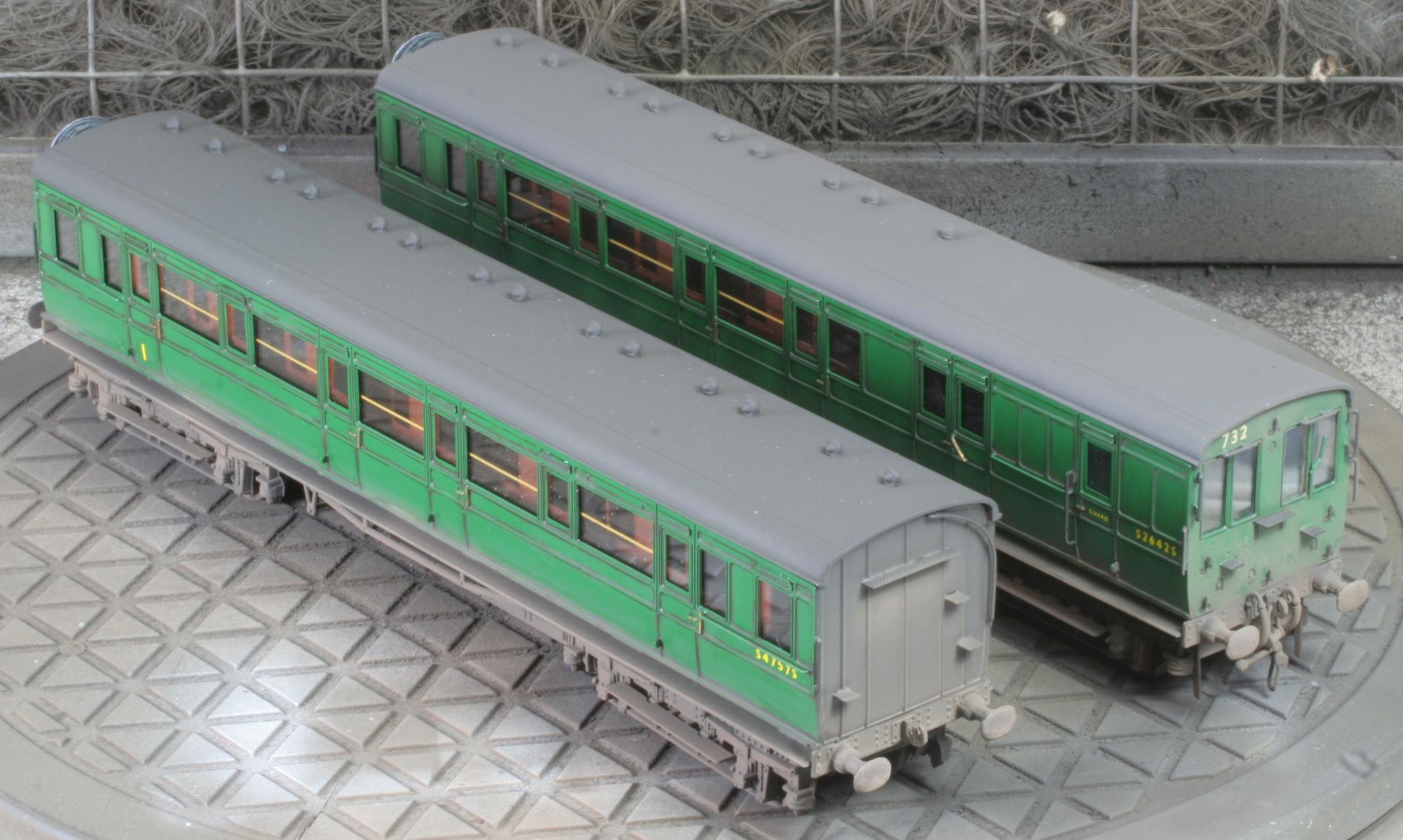