A casual enquiry at Scaleforum has brought forward the idea of working on one of Hornby's Peckett W4 models. What do you think should be tackled? Looked after or neglected?

Before starting on any weathering task, I look for photographs of the intended subject so that I can determine what needs to be done. It's not always possible to find the right condition at the right time in the subject's life, but a combination can usually be found that gives enough information.

Three opinions have been given on how this model should look when weathered. so this being a democratic society, we will go with the majority vote and make it well used but looked after. I have some books of photographs by Gordon Edgar that have industrial subjects in them, and will now spend a few hours looking for black saddle tanks that have been cared for. I wonder how many I'll find . .. ... ....

Before starting work on this locomotive I decided to remove the rather large supplied couplings. My original intention was to simply have no couplings at all, but then I noticed that there is a coupling hook on both buffer beams, albeit grossly over scale. A delve into a box labelled 'Couplings', that hasn't been opened for years (because it contains, mainly, supplied couplings from RTR rolling stock) revealed the presence of a couple of packets of Roger Smith unassembled 3-link couplings. A quick check of dimensions showed that the links could be assembled and clicked into place in the Hornby coupling hooks. 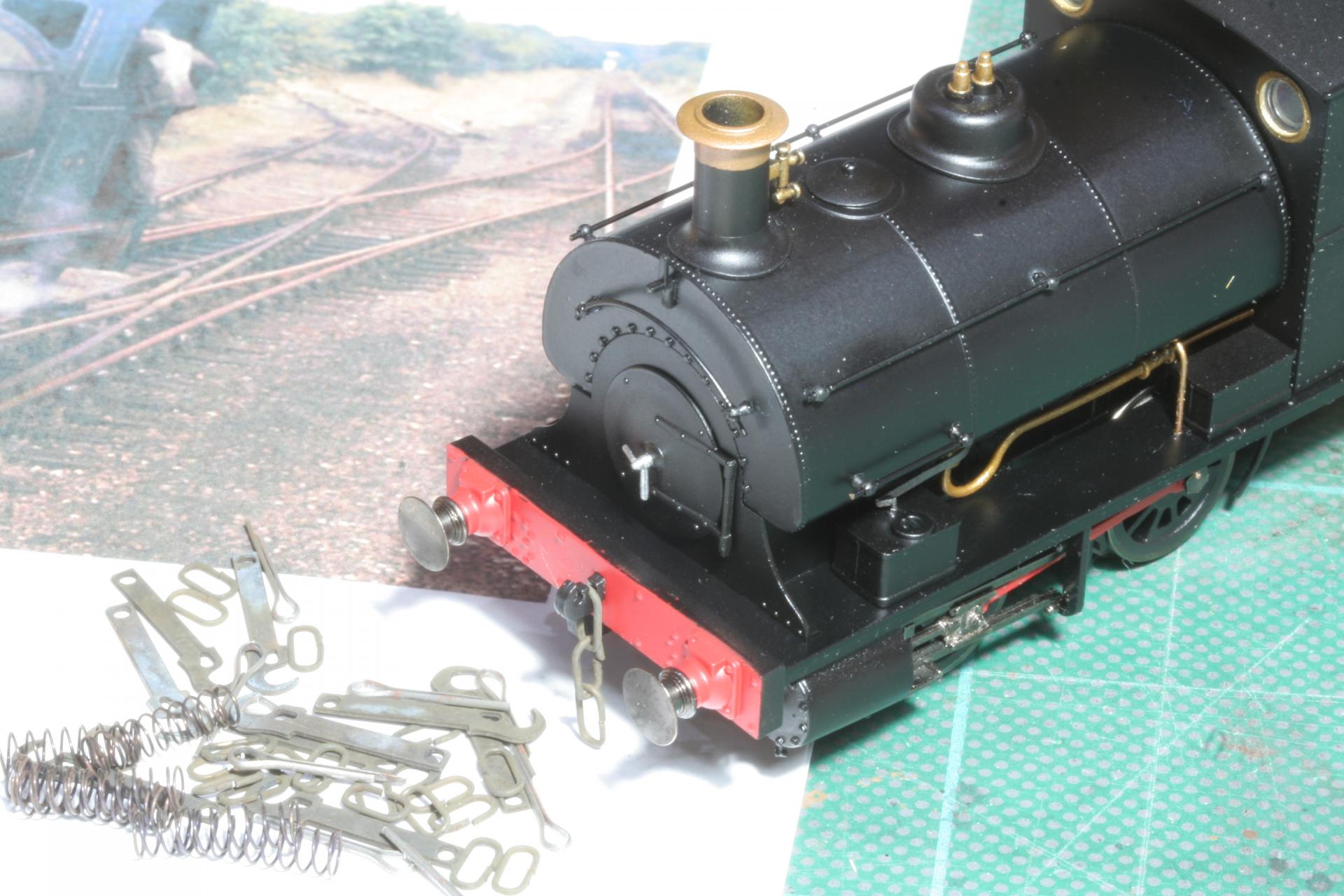 After searching at least 10 books for usable photographs I have managed to find a few that allow me to establish which parts of a cared for locomotive are cleaner than the rest. I thought that Gordon Edgar's wonderful books would help, but subsequently realised that a lot of the photographs that might have helped were re-touched black and white ones. Note that this is not a criticism! I have found many other photographs of small industrial locomotives that have provided clues about colour and placing of oil, grease, dirt and more, so I can make a start on the dirtying process.

I have decided not to make any more changes to the locomotive before starting on it. Many things could be tweaked, replaced, added or subtracted to improve it, but this is not intended to be anything other than a weathering exercise. 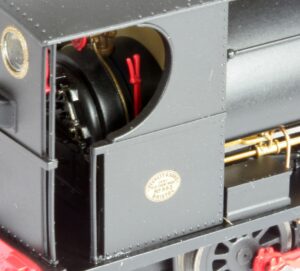 My plan, such as it is, is to produce an oily but fairly clean chassis and wheels, topped by a dirty running plate and cleaned tank sides, cab sides and bunker. The smokebox will be finished matt as befits a hot but maintained one, and the upper surfaces will be sooty. I will attempt to work on the cab interior as well, but that will be a little tricky because of the rather small openings. 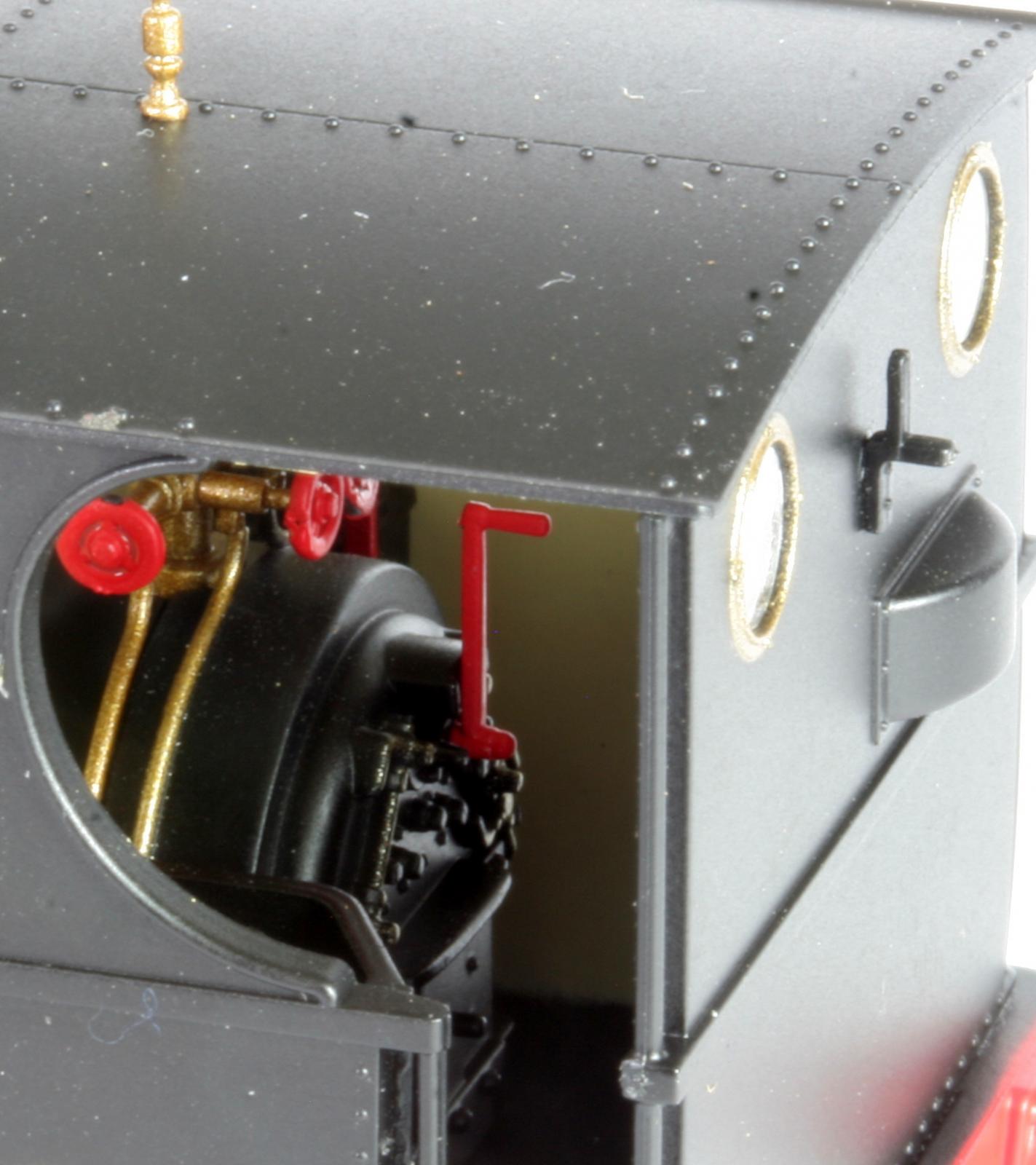 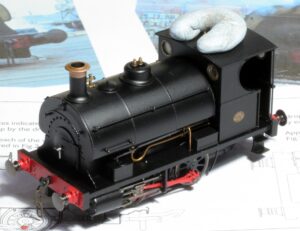 The whistle on the cab roof is very fragile and particularly vulnerable. There will be a lot of work to be done with the locomotive upside down, so some sort of protection is going to be needed. I just happened to have some blue coloured sticky stuff available, so I've used that to provide some protection.

Something that must be done before any weathering is started is to remove all excess grease and oil from the motor and drive mechanism. If this is not done then at some time in the future all of the carefully applied weathering will take on the same oily, dark appearance. There is a reason for me knowing this. 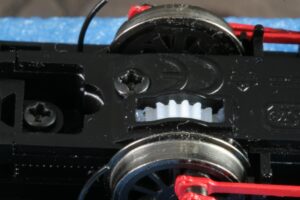 Upon closer investigation, it is apparent that this model was lubricated by using a spoon . . . . . . .

It must all be removed, and in this case I employed a cocktail stick so that I could get into all the edges, corners and spaces, lifting the wheels and axles out to clean inside the bearing slots and gearwheel teeth. 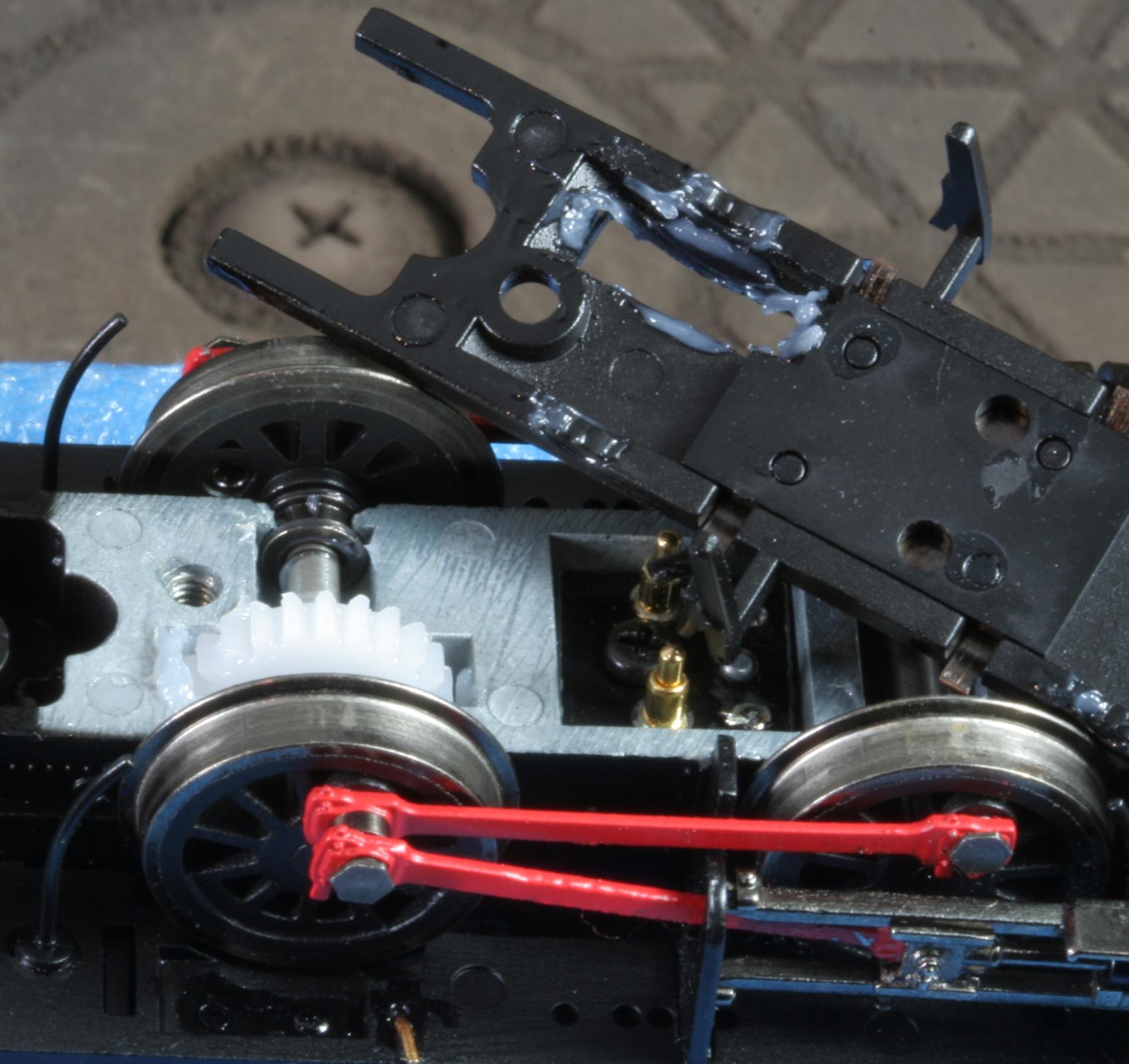 In much the same way as D3721 was started, the loco is upside down in a foam cradle and has been airbrushed with Railmatch Sleeper Grime, the enamel version. The wheels were rotated 1/4 turn after each light spray so that there were no shadow areas behind wheels or motion. This process also helps the pickup wipers to clear the wet paint from the rear of the wheels if any strays that far.

The airbrush in use this time is an Iwata HP-SB Plus, one of my two favourites, which allows me to be quite accurate with the small quantities I'll be wanting to apply to this small loco. You can just see (I hope) that the paint has reached the chassis area but not strayed into the bodyside panels.

I haven't knocked anything off yet!

Now to remove some of the paint applied to the motion and wheels. Remembering the intended clean state of this loco, the coupling and connecting rods will be portrayed as 'wiped clean'. The sleeper grime thus needs to be removed from the areas where that wiping would have taken place, so some clean white spirit was applied with a small brush and rubbed gently to remove some paint. I have also removed some from the slide bars and whatever else might have been kept clean or wiped clean in normal use. 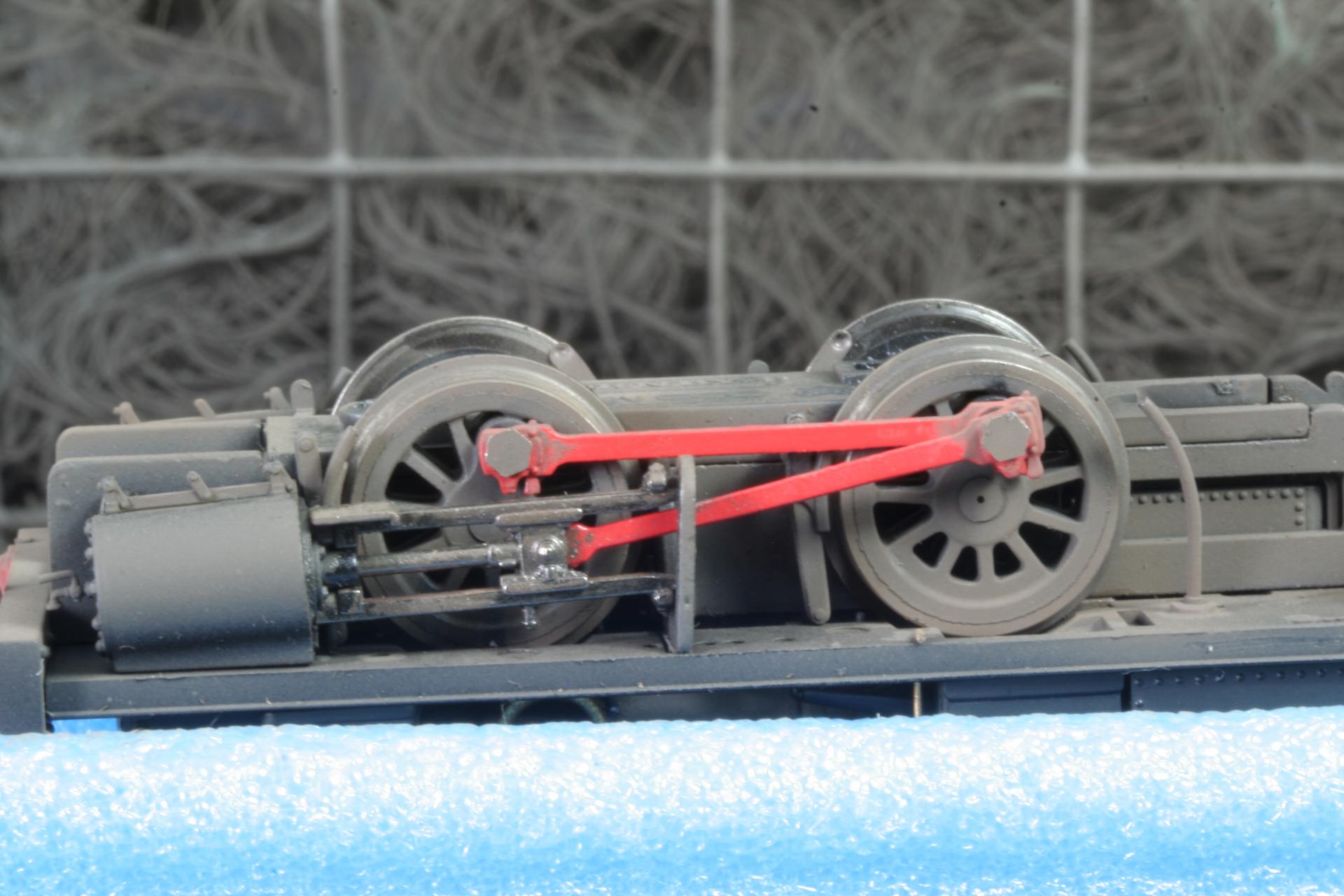 Further paint is removed so that the wheels can be shown as relatively clean but oily. The brush was dipped in white spirit and the wheels turned by faithful PP9 battery. 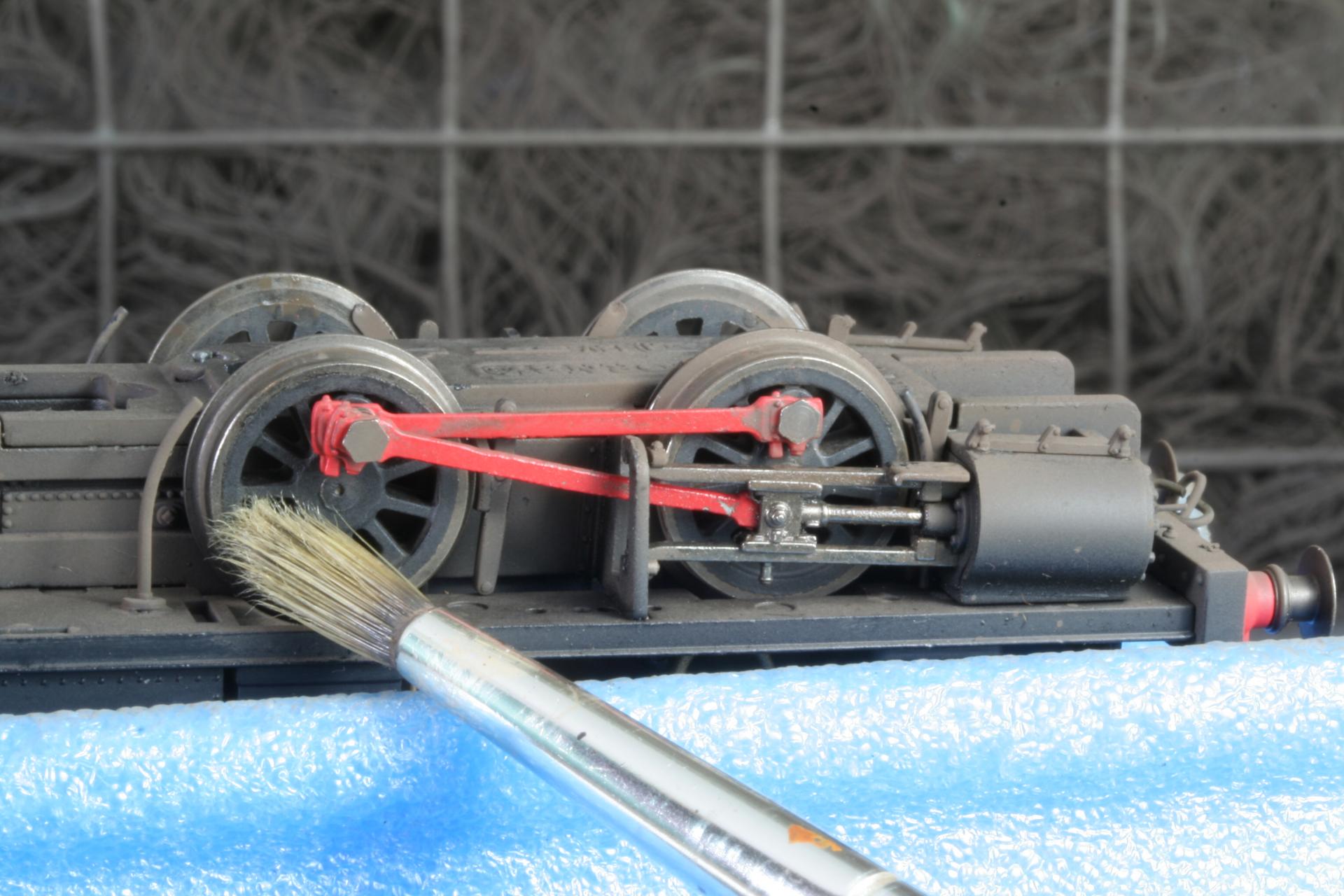 At a later stage the wheels and motion will be treated with a fluid that gives a wet, oily appearance, but the white spirit needs to be given time to evaporate completely. 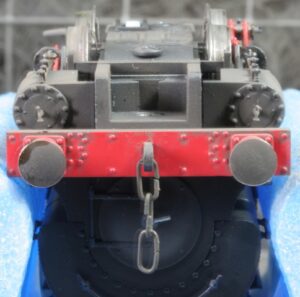 With the model still in its foam cradle I have airbrushed some more Sleeper Grime onto the buffer beams. I left it to dry for 15-20 minutes (time for a coffee) and then started to remove the paint with a damp brush. The brush is not dampened by dipping it into thinners, but by placing a couple of drops of thinners onto the bristles with a disposable pipette. The combination of not-quite-dry paint and slightly damp brush gives a lot of control over how much paint is removed. With the use of light pressure on the brush, the paint will be left accumulated around detail but removed elsewhere. 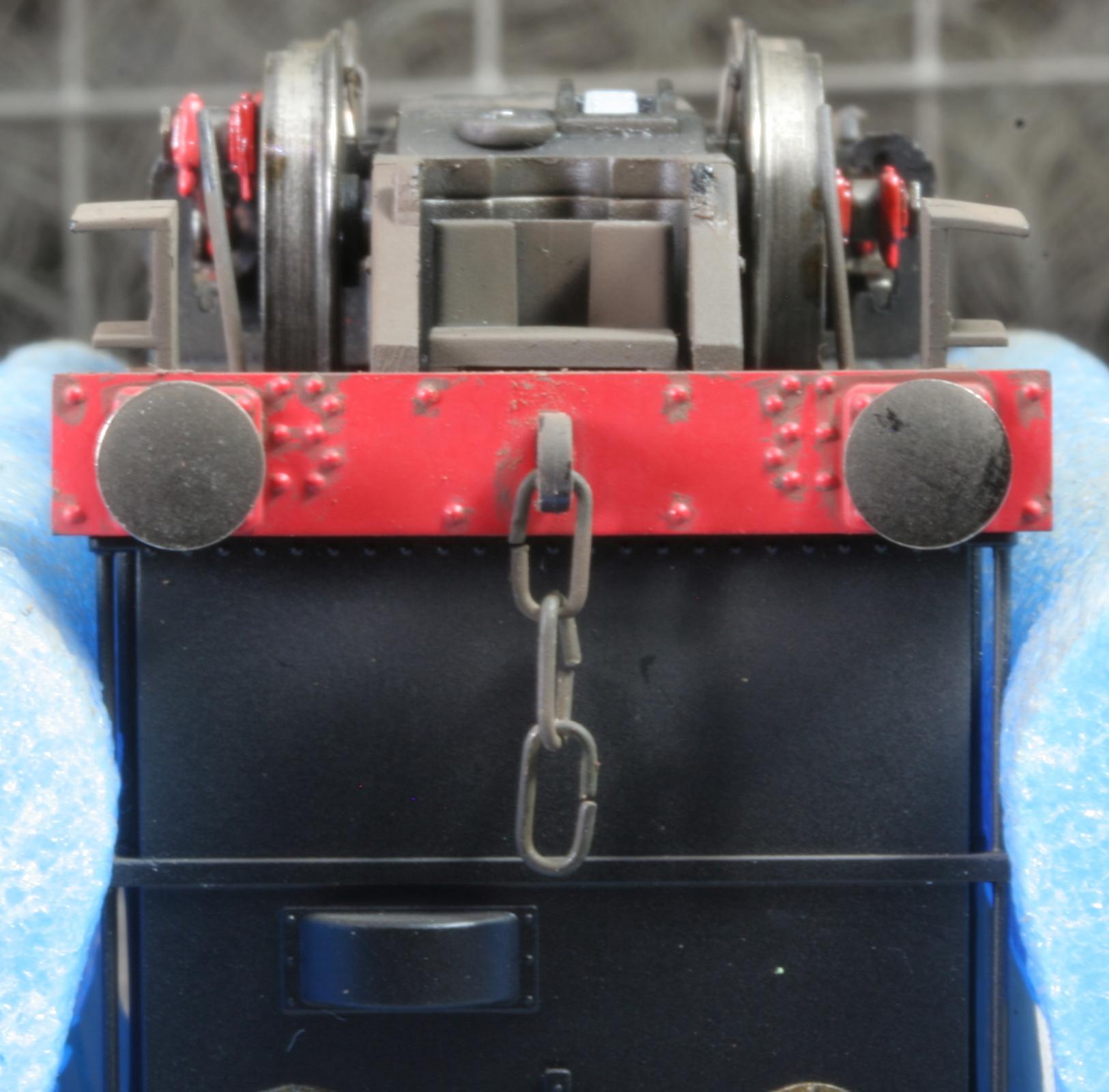 It's all been left to dry properly for 36 hours.

To represent well worn but properly maintained underparts, a layer of AK Interactive Fresh Engine Oil has been brushed onto the rods and wheels. This fluid has some strange characteristics in that it will react with not-quite-dry enamels and make them wrinkly (maybe I should not get quite so close to the bottle in future

Once again, to keep the applied layer even and consistent, the wheels were rotated during the process with the PP9 battery.

I'm risking boring you with photographs now, but here we go. This is what the loco looks like after the work on the underparts. Apart from protecting the whistle with blue coloured tacky stuff, nothing has been done above the running plate.Just look at all the lovely detail that Hornby have been able to give us: 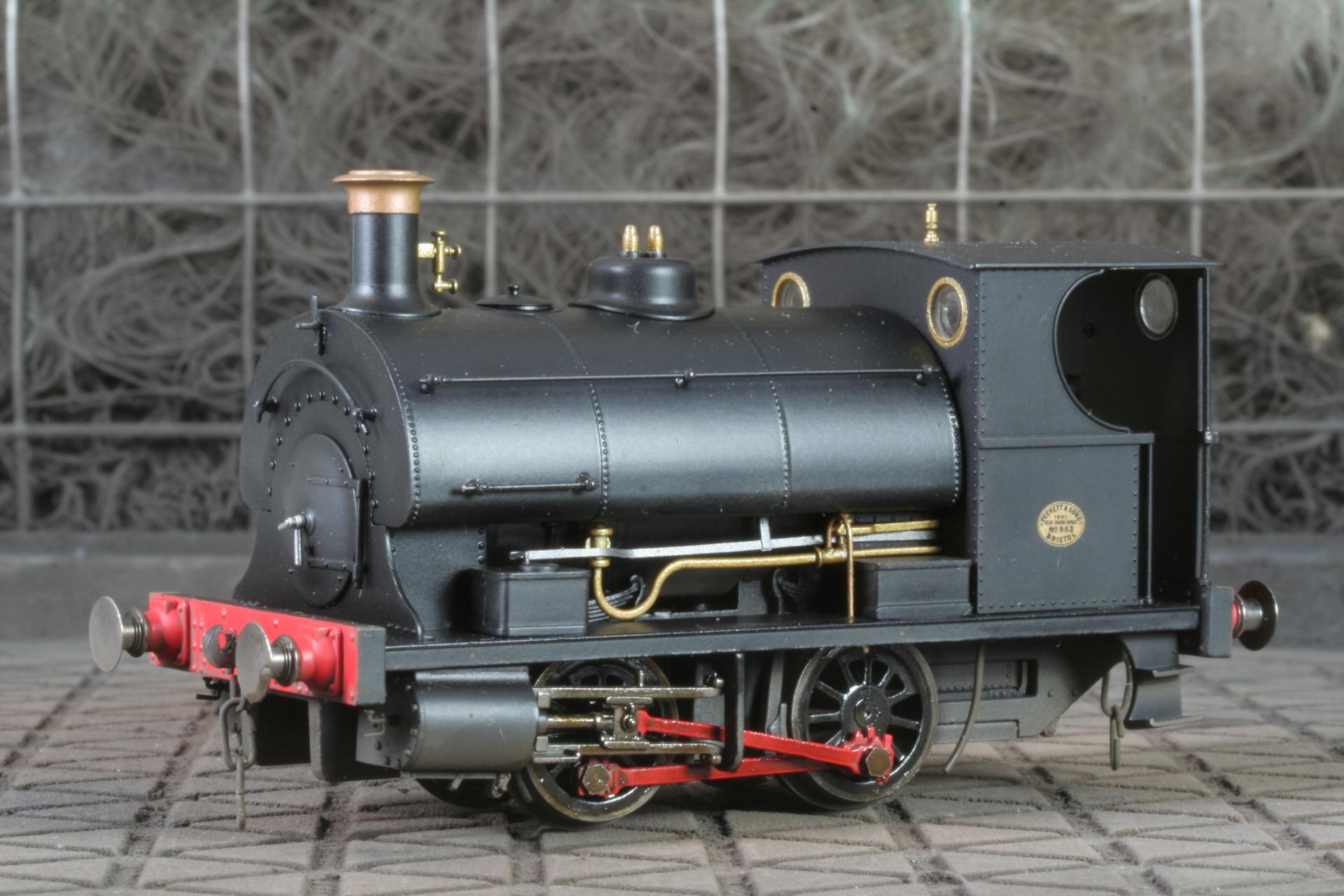 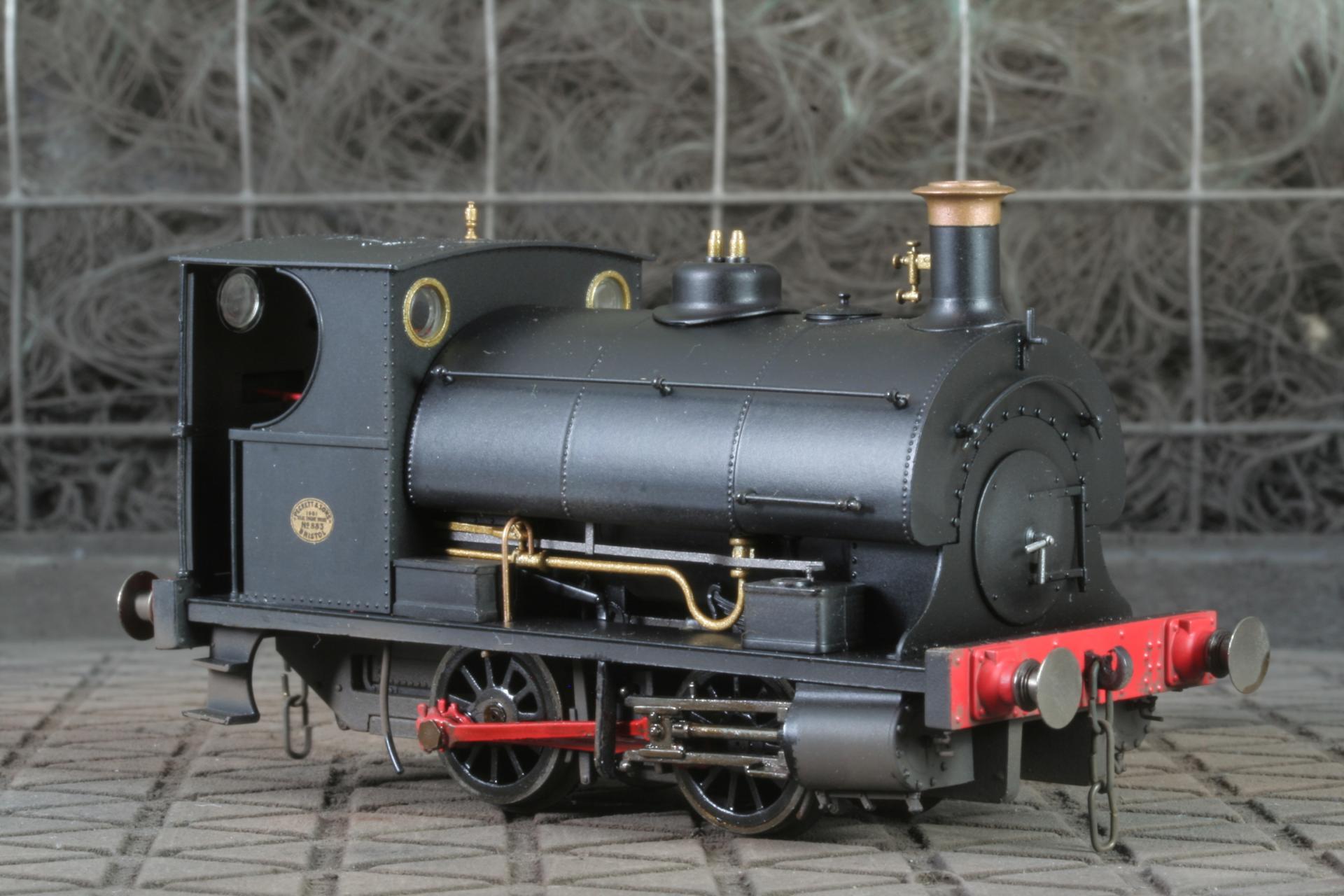 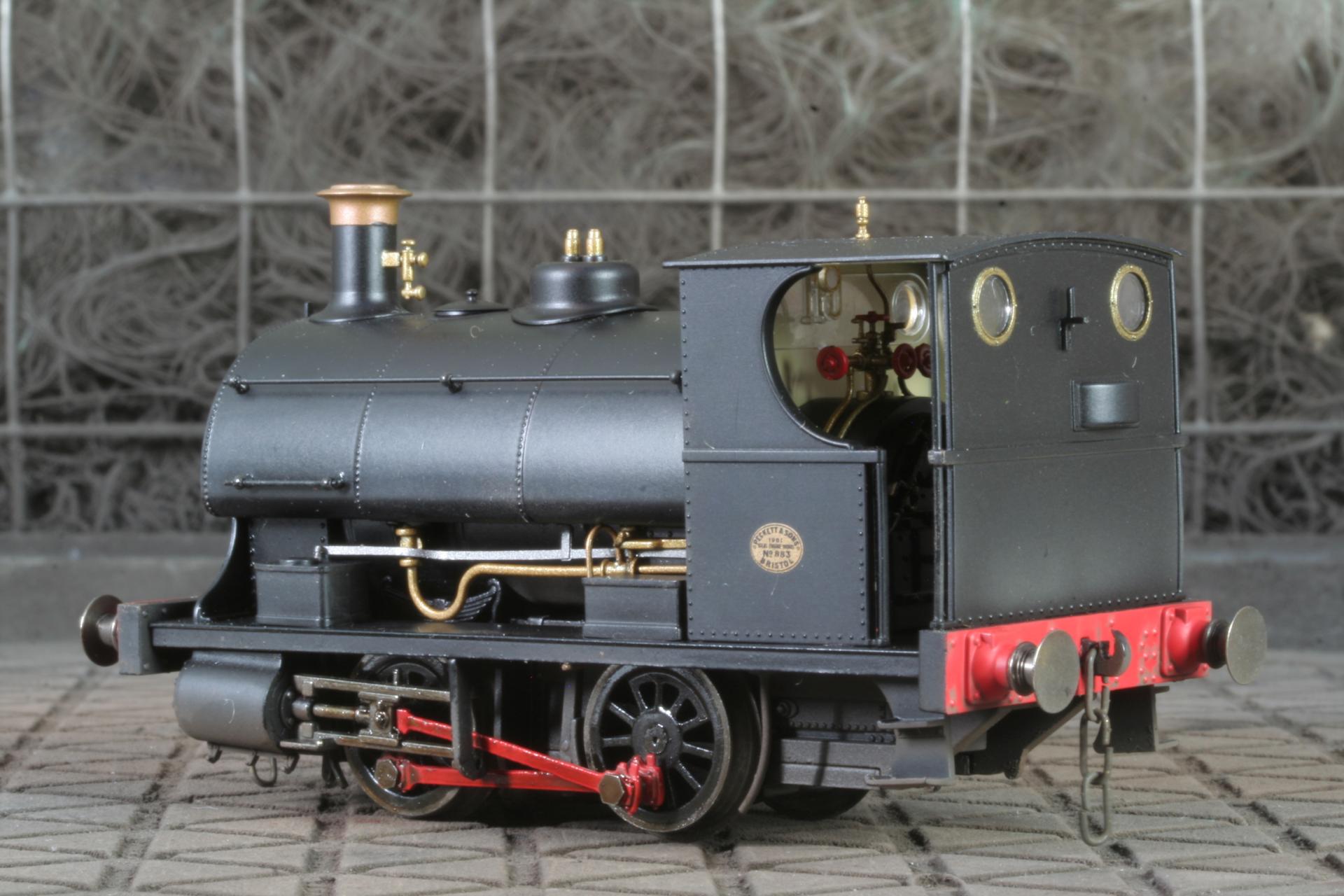 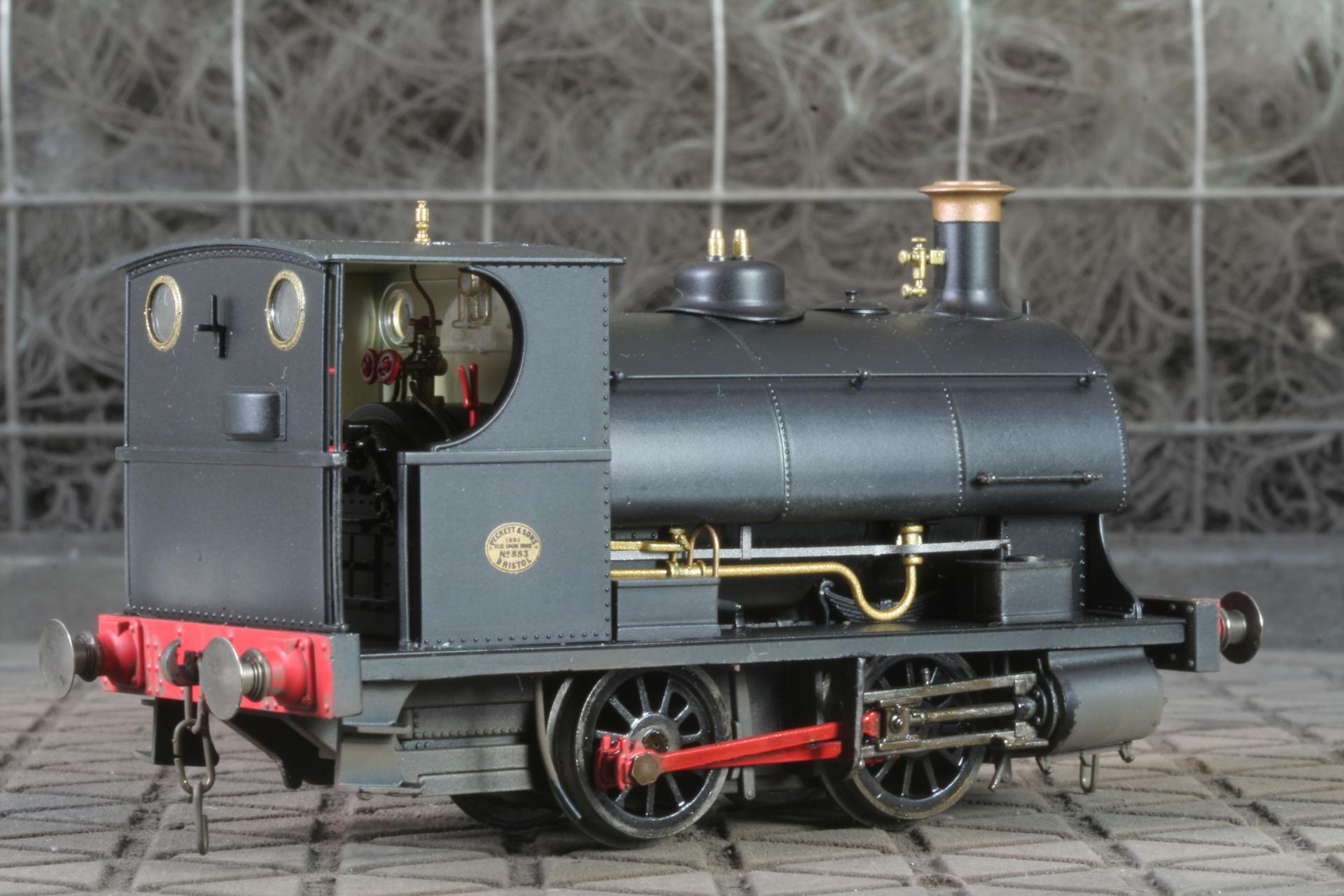 The paint finish on this model as supplied is very good, but satin. The idea with the weathering to be done is to present a well looked after locomotive, so the satin finish needs to be altered to a shiny one, but not uniformly so. The cab sides and bunker have been polished with a gentle application of isopropyl alcohol (IPA) on a Tamiya cotton swab. These swabs are very tightly bound and shaped, the ones that I normally use being pointed at the tip. This shape allows me to be quite precise with the area to be covered, and by using the tip rather than the side I can deliberately create an unevenly shiny surface.

This photograph shows the effect when using the tip: 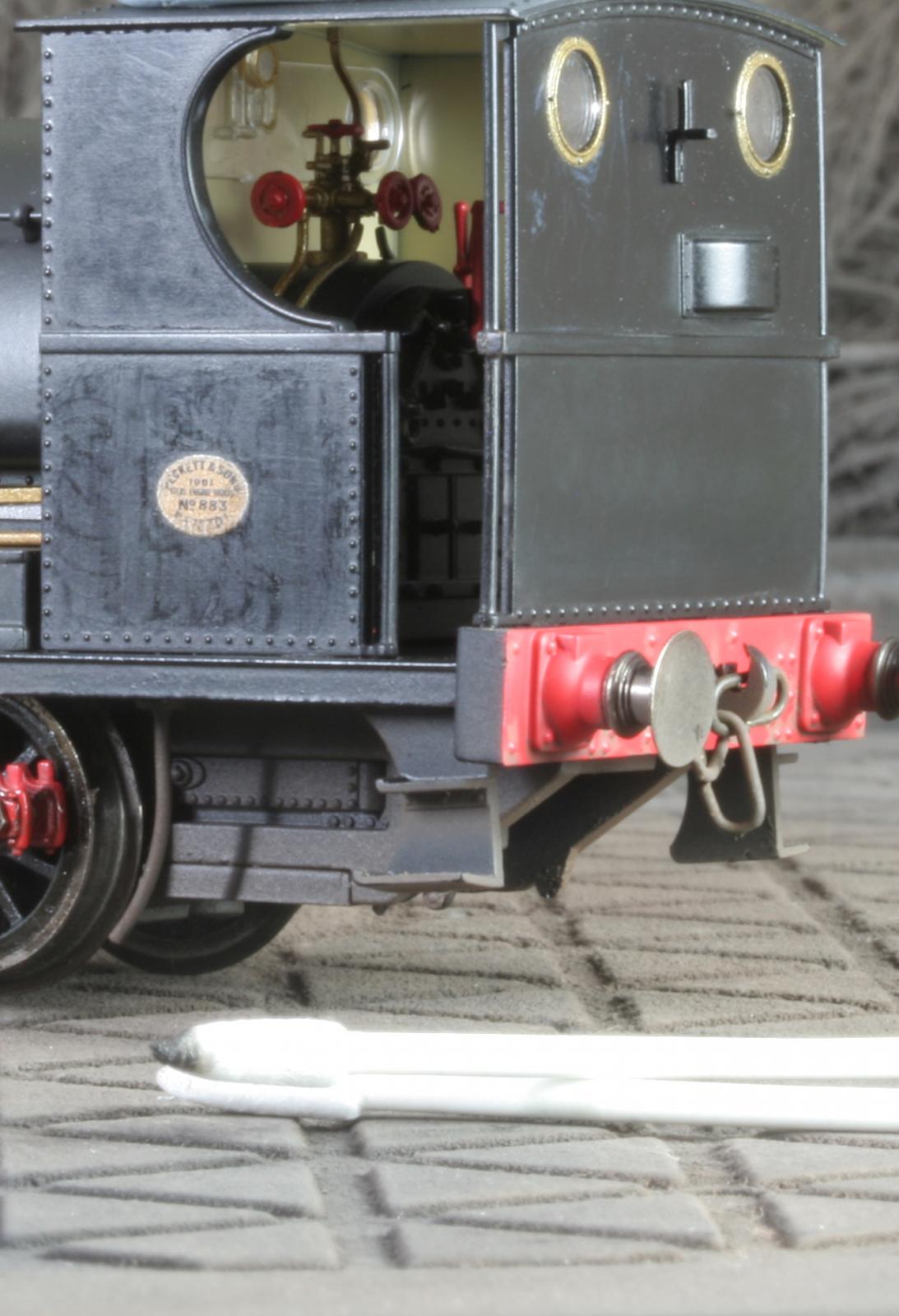 This photograph shows the effect when using the side: 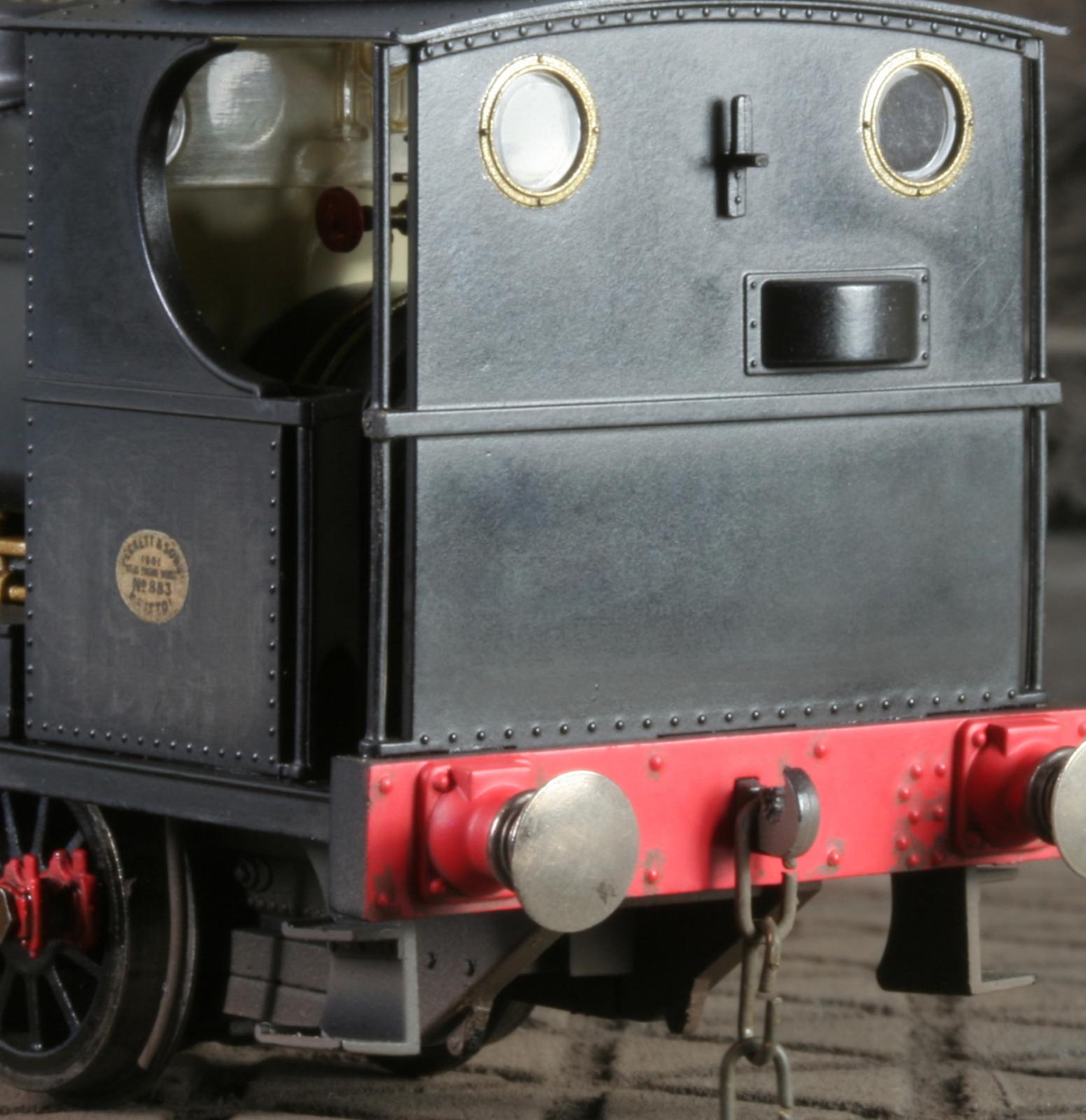 The saddle tank on this model is a hefty lump of metal, but still well detailed. In order to emphasise the uneven surface of the tank, I have used T-Cut applied with small cotton swabs to create the shine. Yet again, only small quantities have been applied, and the result is a nicely subdued shine that has proved extremely difficult to photograph successfully.

Areas like the chimney, cab roof, firebox door, pipes and running plate will be dirty to some degree, even on a well-maintained locomotive. For this subject I have prepared these surfaces with some brush-on AMMO by mig Panel Line Wash (PLW) Black Night. This fluid is a very thin enamel paint, basically, and has a very small content of pigment compared with carrier. I have used it here to introduce a small build-up of dirt around the chimney top and base, the cab roof, the pipework and the running plate by 'sloshing it on' with soft brushes and leaving it to dry. 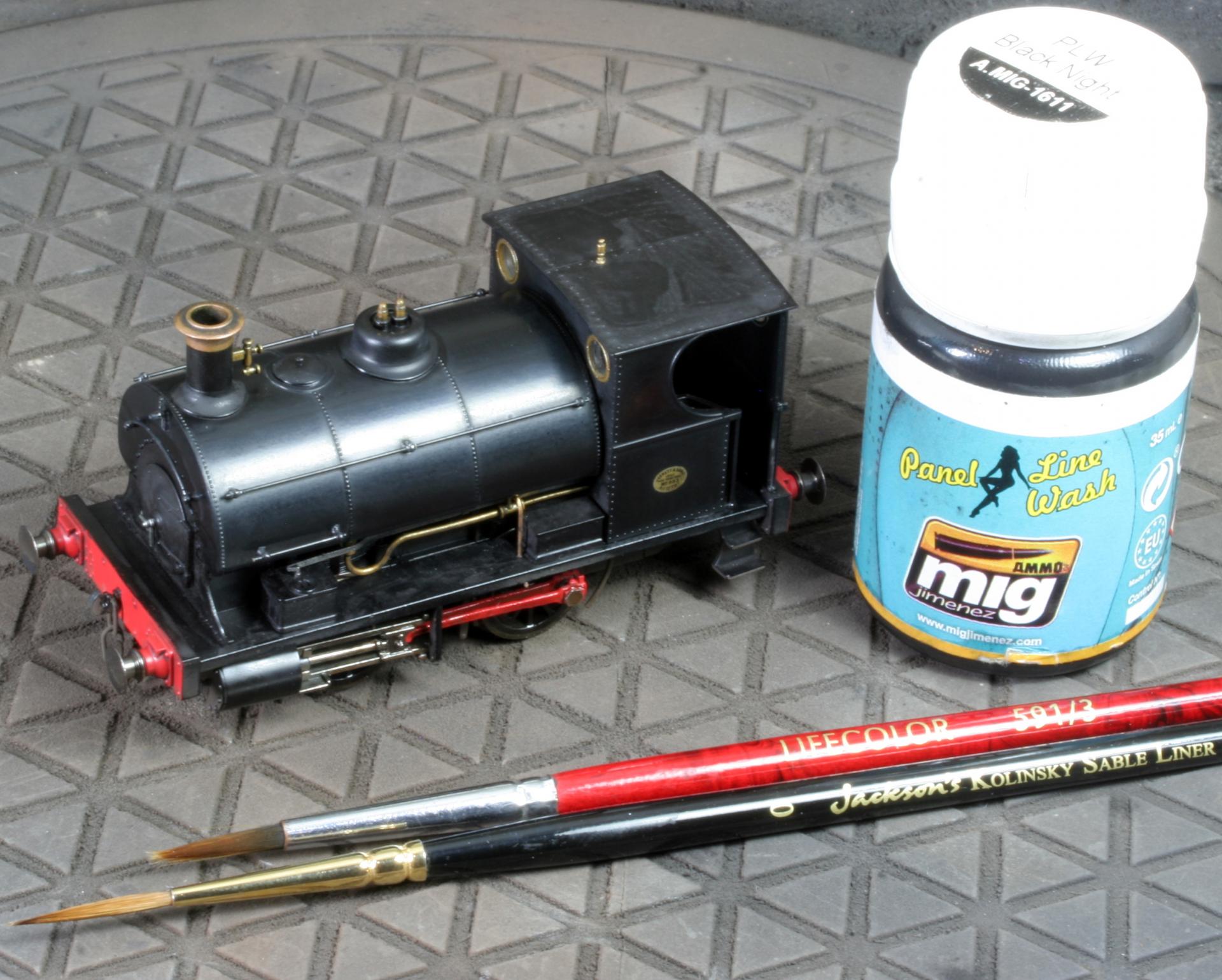 To represent soot and other associated grime that falls on horizontal surfaces, I have used Mig Productions Black Smoke pigment, applied with a filbert brush, where appropriate. This means cab roof, top of boiler, running plate, tool boxes, etc. The previous layer of Black Night PLW has helped this pigment to 'stick' to these surfaces. 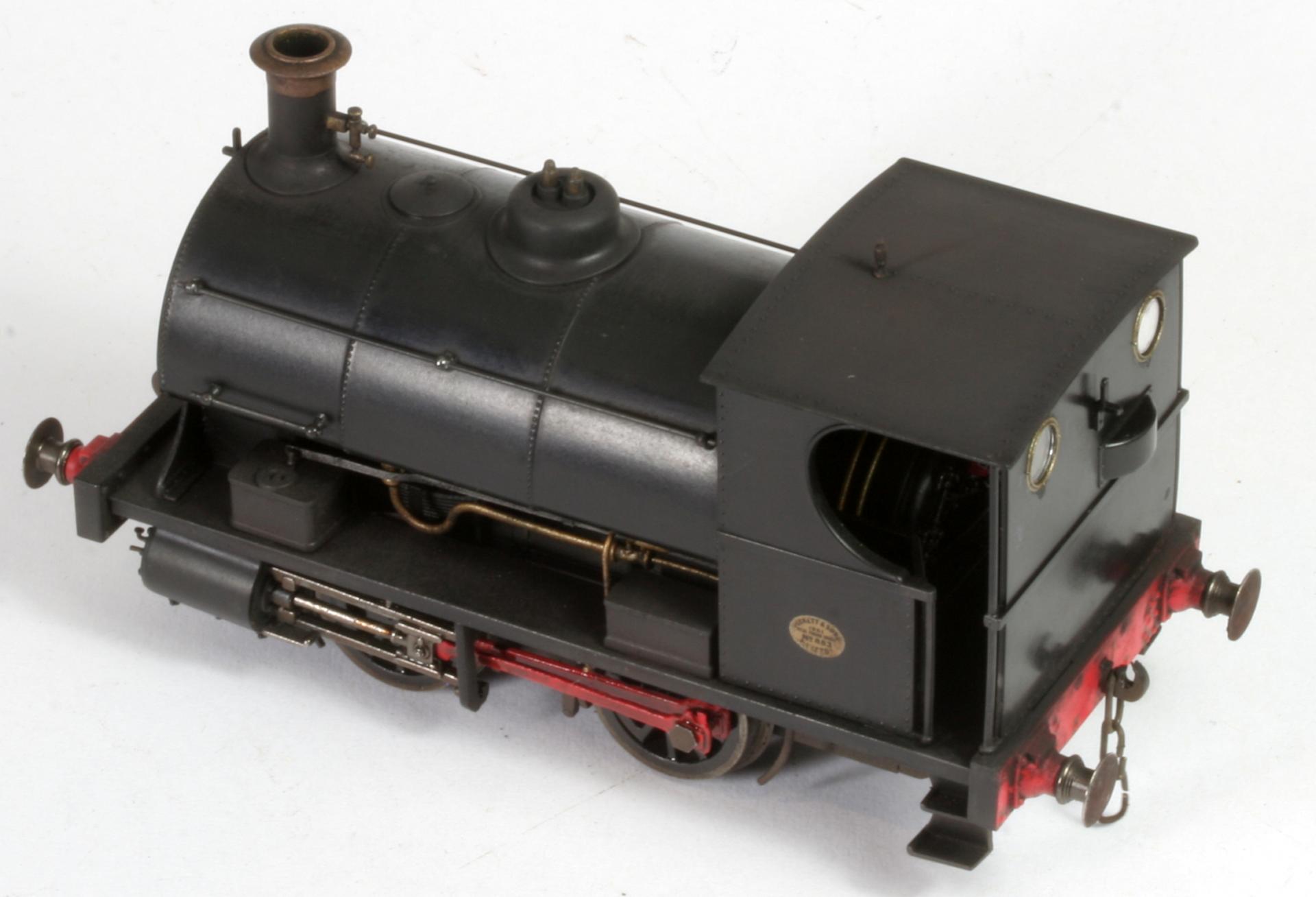 I have also applied a small amount of Black Night to enhance the dirt buildup on the buffer beams. 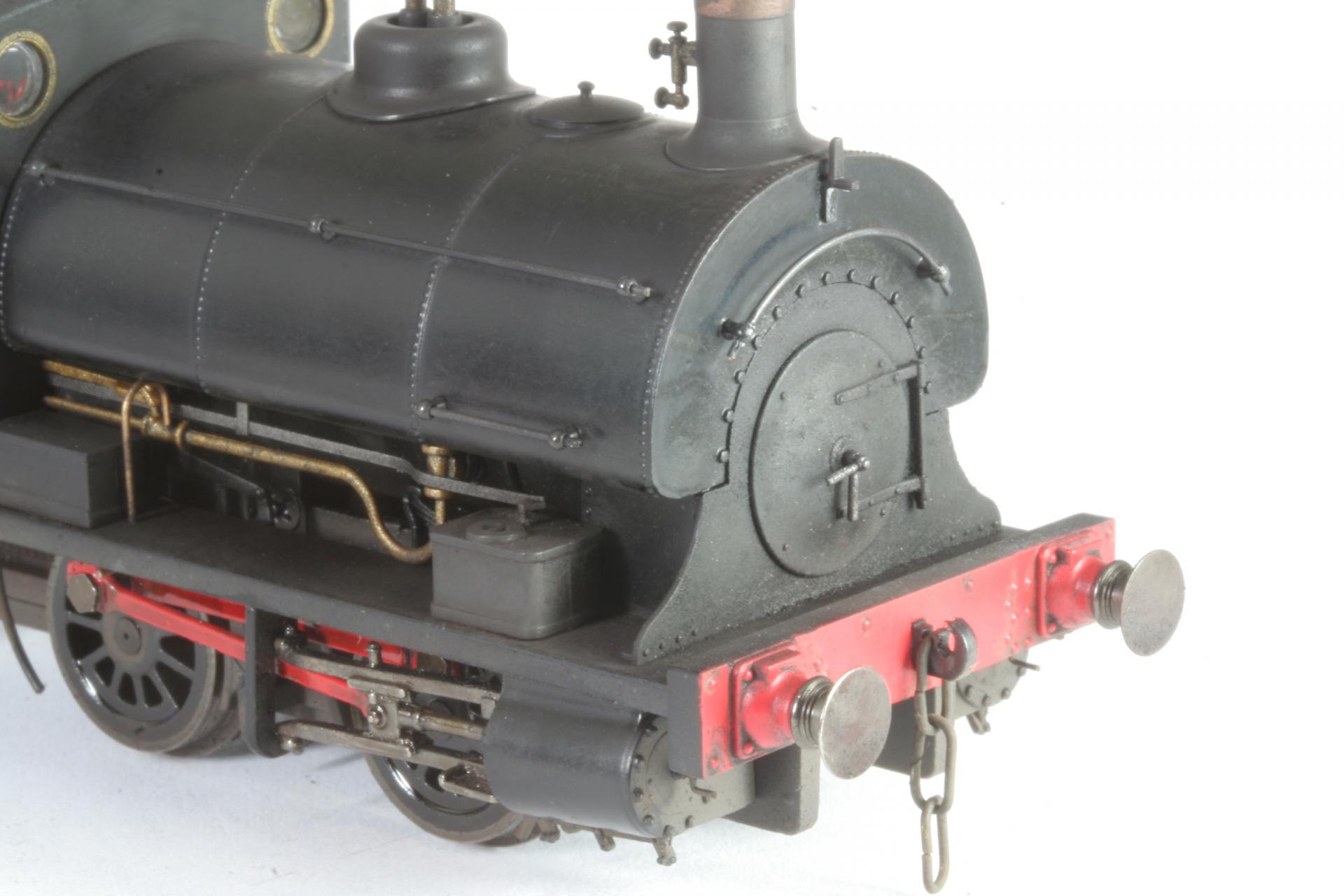 Final step. Some Mig Productions Dark Mud has been added to the firebox sides that show through the frames under the cab to represent the rusty state of that area, but it's difficult to see in photographs. The whole locomotive has been subjected to cleaning up and running tests to make sure that all pickup surfaces are clear of paint. This is achieved by wiping the surfaces with a Tamiya cotton swab dipped into isopropyl alcohol, which will remove even hardened enamel paint. Wheels were turned with the PP9 battery, and the cotton swab gently pressed onto the affected areas. 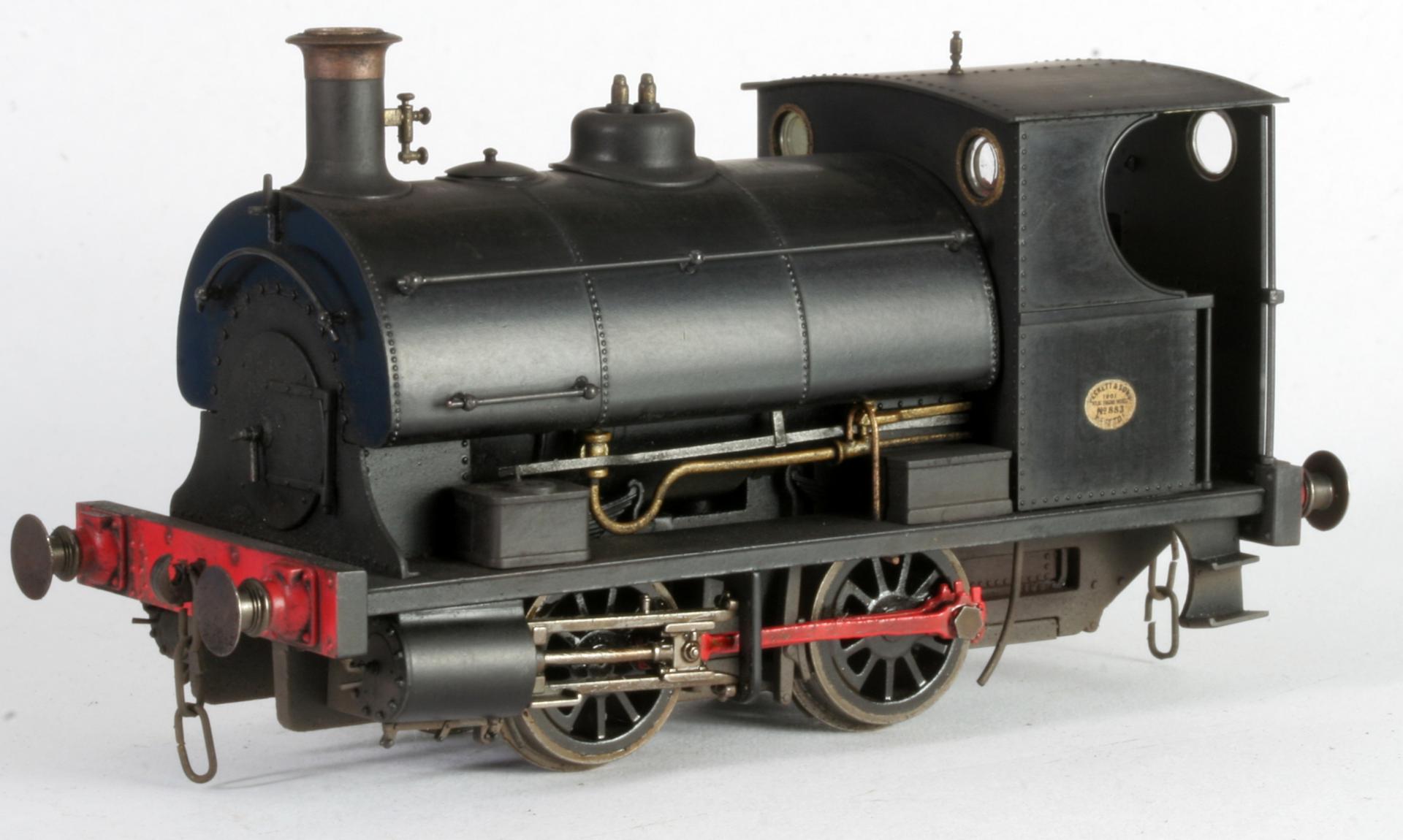