Ever since failing my driving test for the second time, in a Land Rover in Cyprus (exotic lifestyle!), I have had a soft spot for the machines. When at Railex in 2017 I found an Oxford Diecast 1/43rd version and decided to use it for a minimum cost weathering exercise.

The idea was to spend as little as possible to weather this model, but end up with the wherewithal to continue weathering as many more models as possible with the materials purchased. My purchases were:

I used some items already in the tool box, so haven't included them in the cost:

I didn't take step-by-step photographs of the process(es) at the time, but will endeavour to explain how each aspect of the model was done. 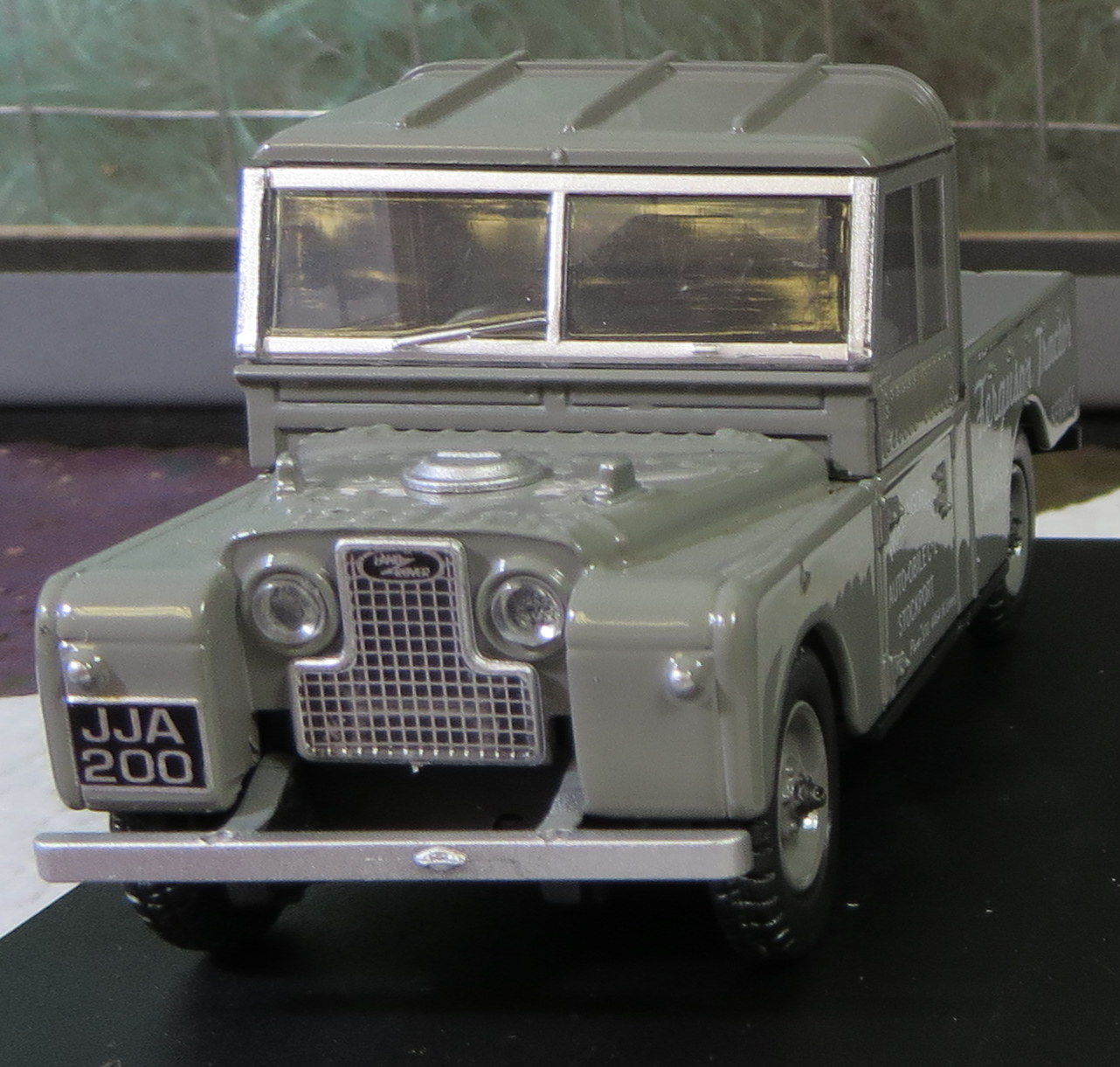 The weathering process for the tractor was no different to that for the Land Rover, except for a little bit of glossy stuff here and there. 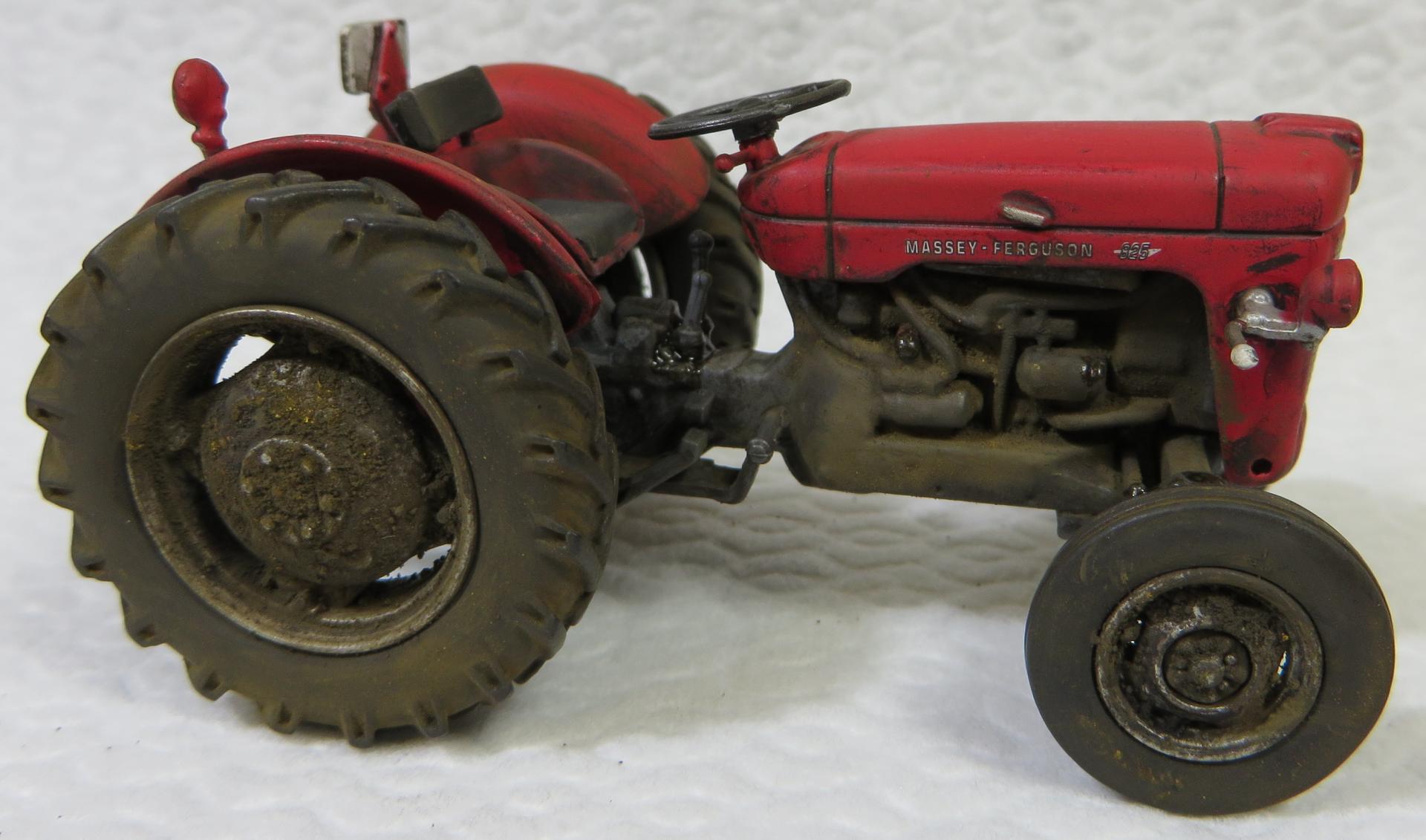 Diecast models have a high gloss finish when new, which is absolutely no use when you need to apply pigments (weathering powders). The solution is to apply a layer of something to present a matt finish for the pigment to 'stick' to. Why is the word 'stick' in quotation marks? Because the fine particles of powder fall into the valleys in the surface of the matt finish rather than stick to it. A gloss finish is smooth and reflects light, which is why it appears shiny, whereas a matt finish is rough and thus does not reflect light so well.

Any matt finish will provide a key for the pigments, but my favoured substance is Testor's Dullcote. The aerosol version is the easier to obtain in this country, so that is what I use. An aerosol is not the most controllable way of applying a substance to a surface in the quantities we use as modellers. The flow is either on or off - nothing in between - and directional control is very basic, too. The method I use to ensure a light coat is applied to something like our Land Rover is to start the spraying off the model and then move the can along the length of it, maintaining the same distance from it, and cease spraying off the other end. This ensures a constant application along the whole length of the model. The volume that falls onto the model will be dictated by the speed at which you move the can along the length of it. The intention is to spray enough to cover the model but not so much that it creates runs and a buildup of fluid at the bottom edges. Much easier to demonstrate than describe!

You are quite likely to end up with air bubbles in the surface, but I have found that the majority of them will disappear in the drying process. Any that persist into the almost dry state (when the shine of the Dullcote starts to disappear) can be dealt with by the judicial use of a pin.

In the case of subjects with glazed areas I don't bother with masking of any sort, preferring to clean up once the process is completed. 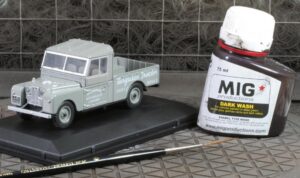 The first thing done with high gloss diecast models is to add the wash, if dirty areas are to be depicted. It's done at this stage because enamel washes work very well on a high gloss surface. Using the rigger brush and my trusty Mig Productions Dark Wash (because I can't find the one I bought to do the original Land Rover!) I've added fluid to all the corners, edges, lumps and bumps to highlight detail and prepare for dirty areas. Note that there are many blobs and runs that look a right mess. This will be rectified very soon. 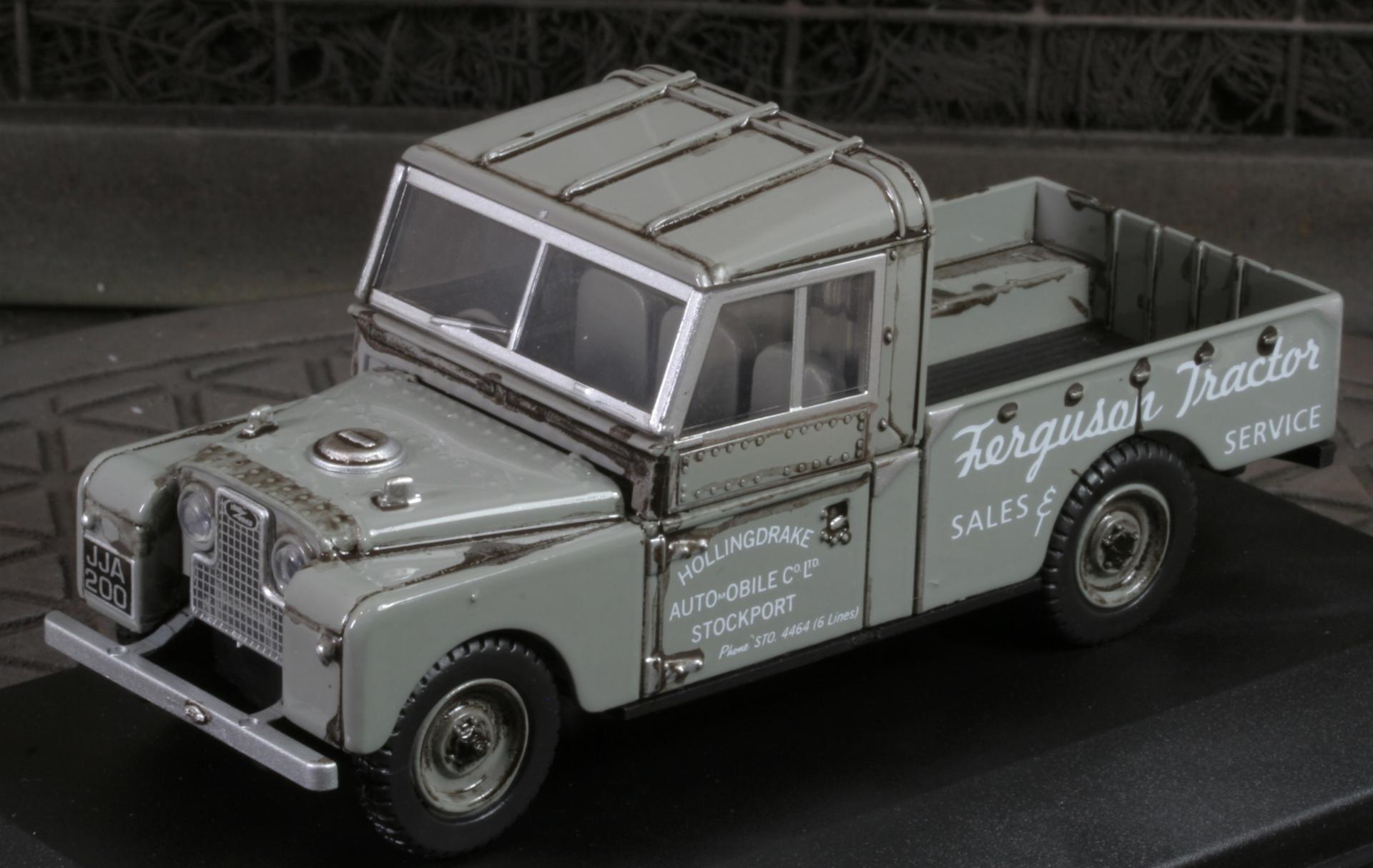 Once the model has been left to dry for a short while (15 to 20 minutes) the cleaning up can begin. For models to 4mm and below scales I normally use the rigger brush slightly dampened with thinners for this operation, but with models as large as this, with larger areas to clean up, I use a very tightly bound cotton bud (intended for make-up rather than babies) without thinners. If I need to get into tight corners (such as the small panels on the cab roof on this model) then I will use the rigger brush.

These shots show the work in progress: 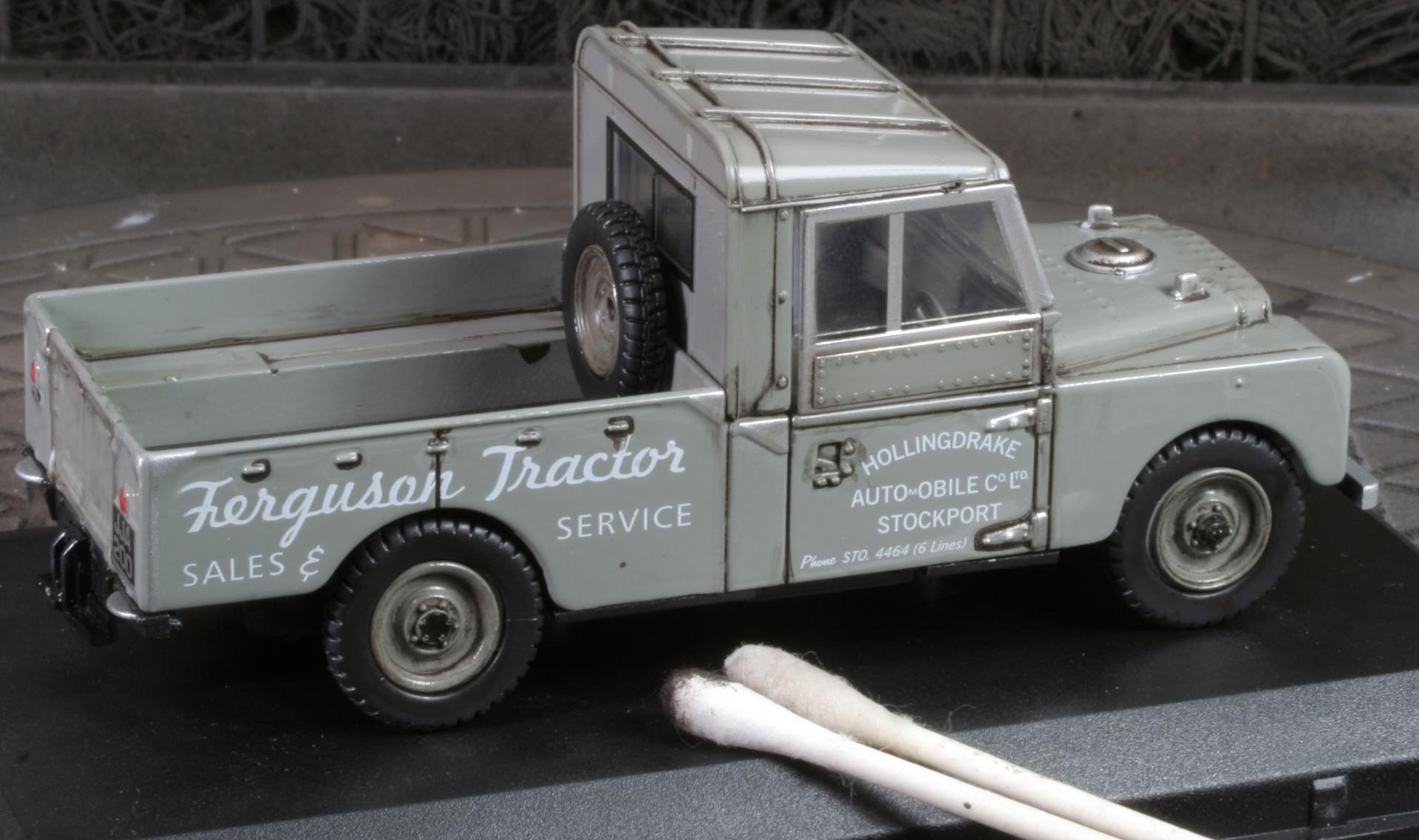 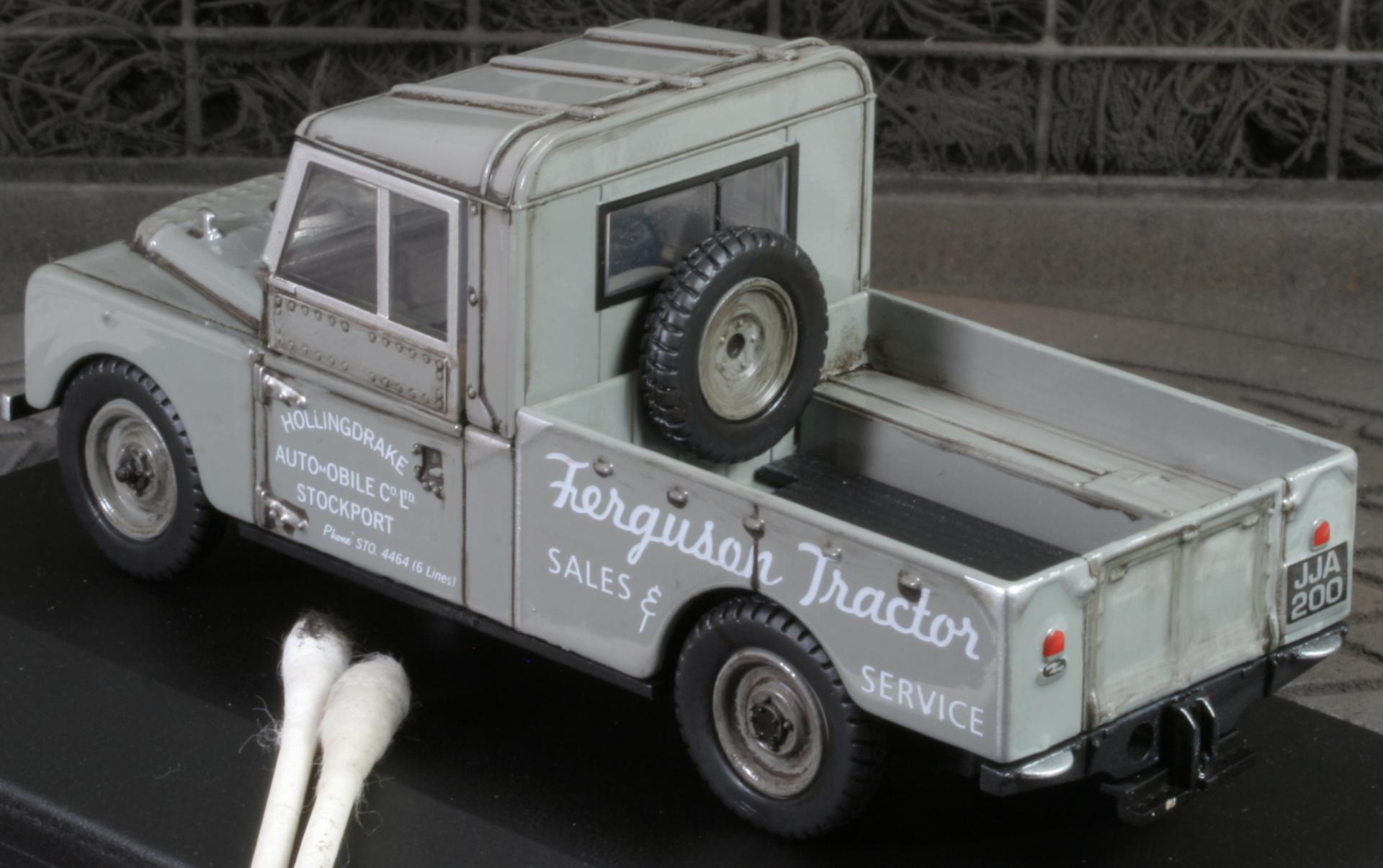 Once all the wash areas have been tidied up, the Dullcote can be applied. My preference is to use the aerosol can, but there is another method, which is to use it from the bottle. Whether it is applied by bristle brush or airbrush it will need thinning, which requires cellulose thinners. I am not a fan of cellulose for anything to do with weathering, because I consider it unnecessary in that context. The effect of the toluene in aerosol Dullcote can be minimised by applying it outside in the fresh air, and the far smaller quantity expelled by an thinned airbrush solution can be handled by a good spraybooth extractor. If all of this puts you off, then a good matt varnish will do just as well.

A good even coat is applied and left to dry. It is touch dry in about 15 minutes and, for my purposes with this model, the pigments can be applied straight afterwards. 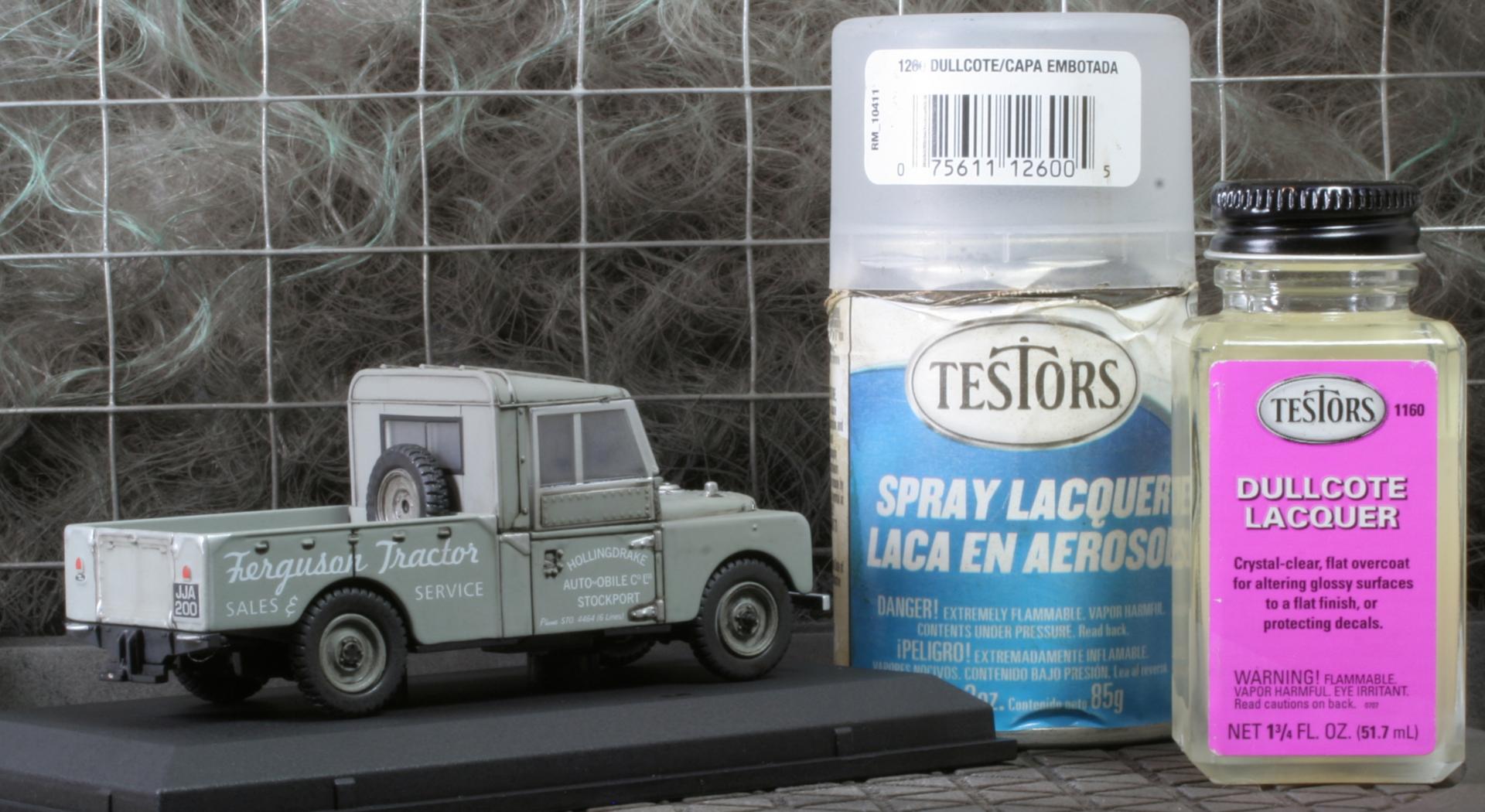 The key to successful appearance when using pigments is to apply small quantities at a time. This approach allows the gradual build-up of colour and texture, so that the subject is not overwhelmed. My technique involves the following steps:

The process will allow the representation of a dirt build-up that occurs over time: 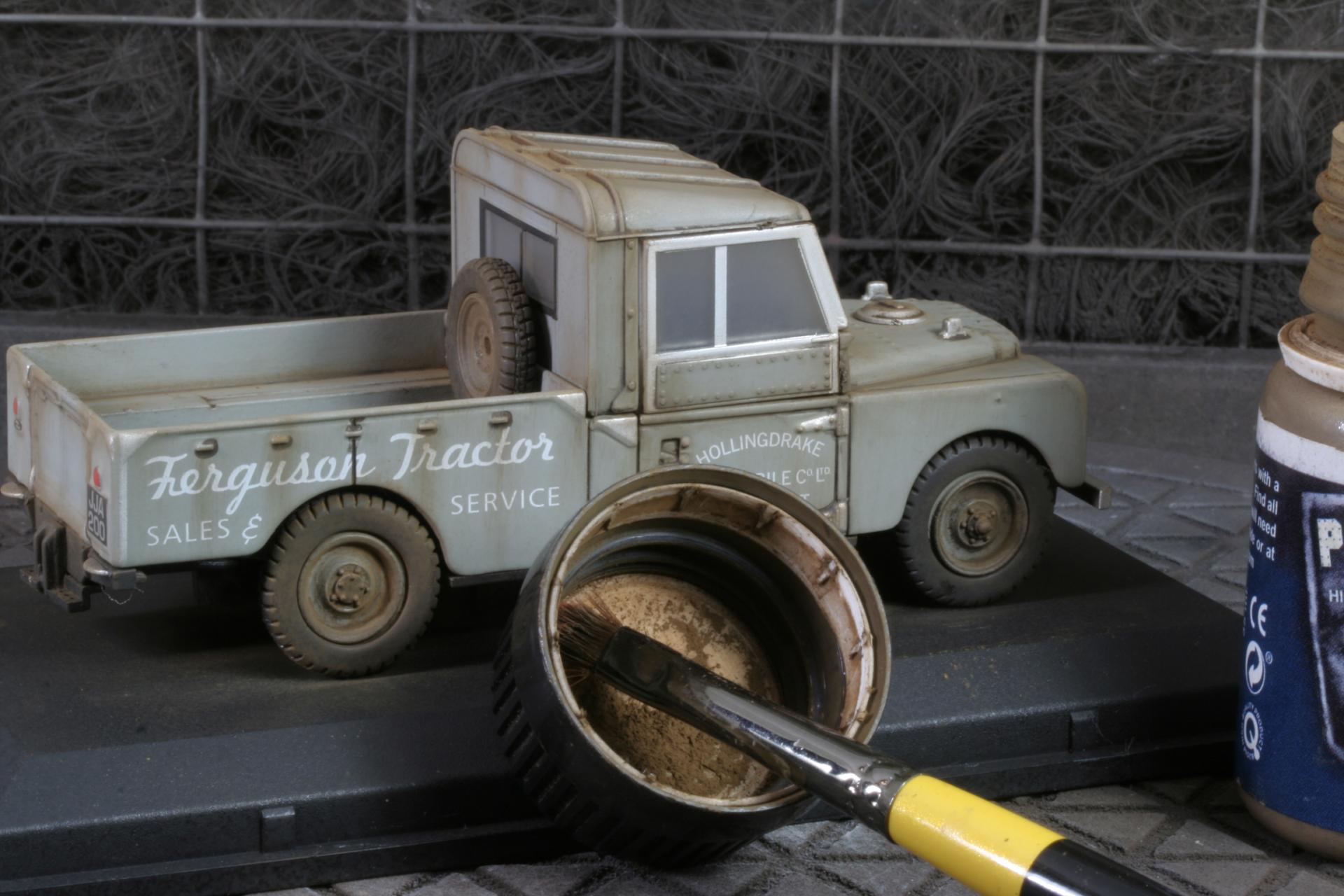 In 7mm scale and larger, it is quite reasonable to use pigments to add texture without the look achieved being overdone. In the case of our Land Rover, pigment can be used to replicate accumulated mud on the wheels. A generous (for a change) amount of pigment is collected from the pot and deposited on the wheel hub, having supported the model on its side (hence the strange viewing angle). 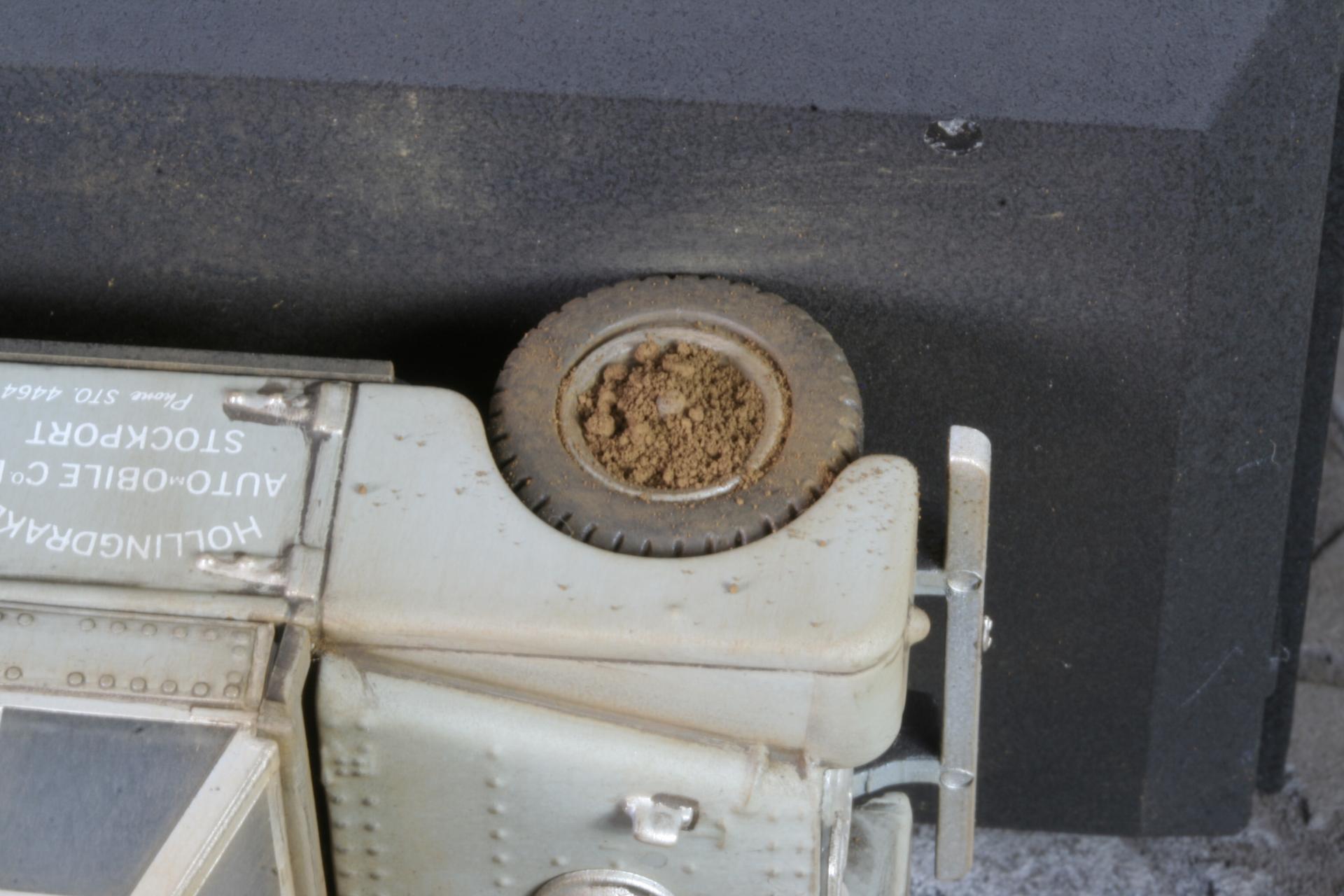 When happy with the general arrangement of the pigment pile, a drop of white spirit is added to the hub. The pigment immediately absorbs the drop and a right mess ensues: 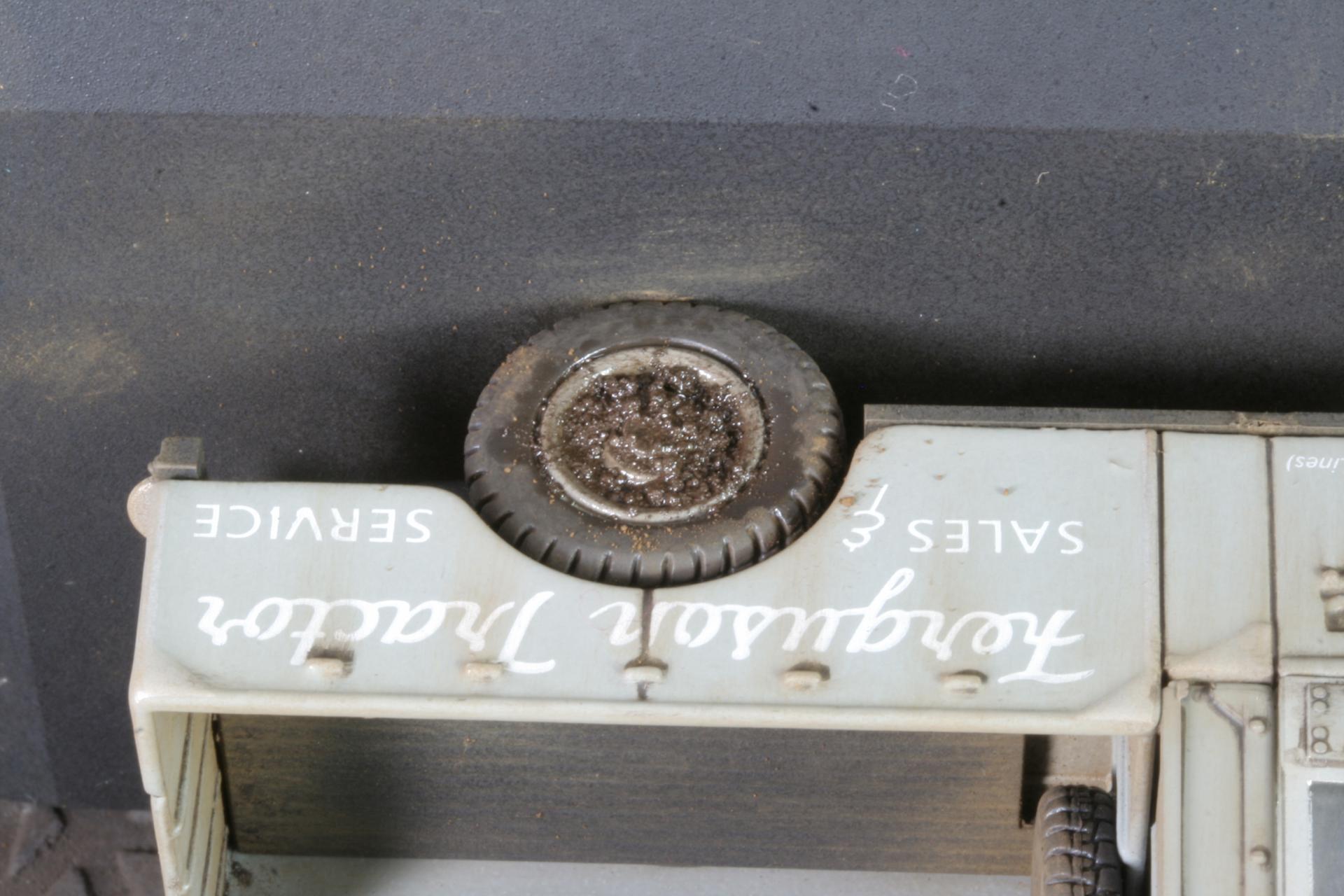 The glazing is currently covered in a coat of Dullcote, so the driver and any passengers who might be present will have difficulty seeing where they are going. Not to worry, the trusty cocktail stick is close by. A wooden cocktail stick will absorb white spirit, and white spirit can be used to remove even hardened Dullcote from glazing without doing any damage. As long as the cocktail stick is gently rubbed against the glazing using the side of the tip rather than the point of the tip, a clear patch can be created in fairly quick time. 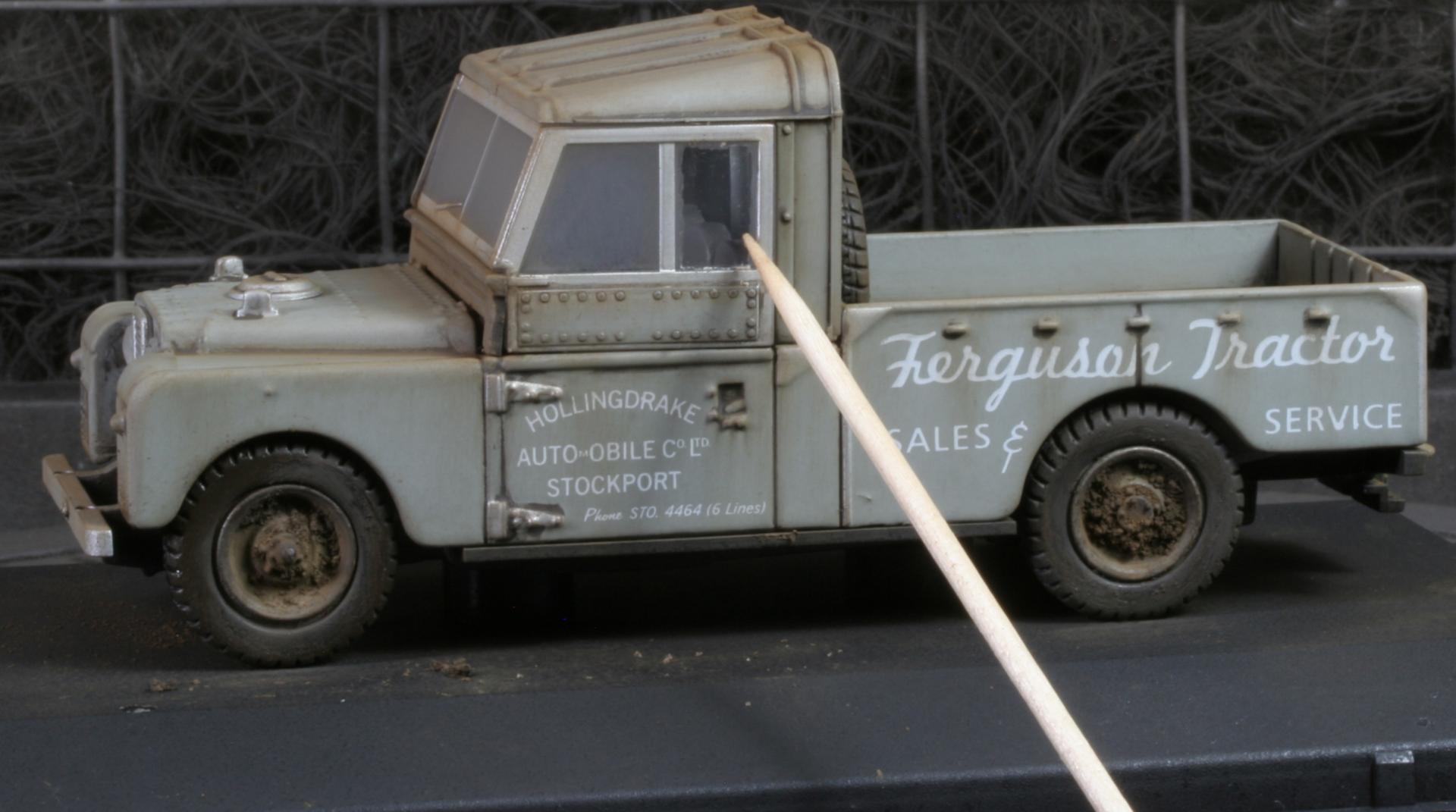 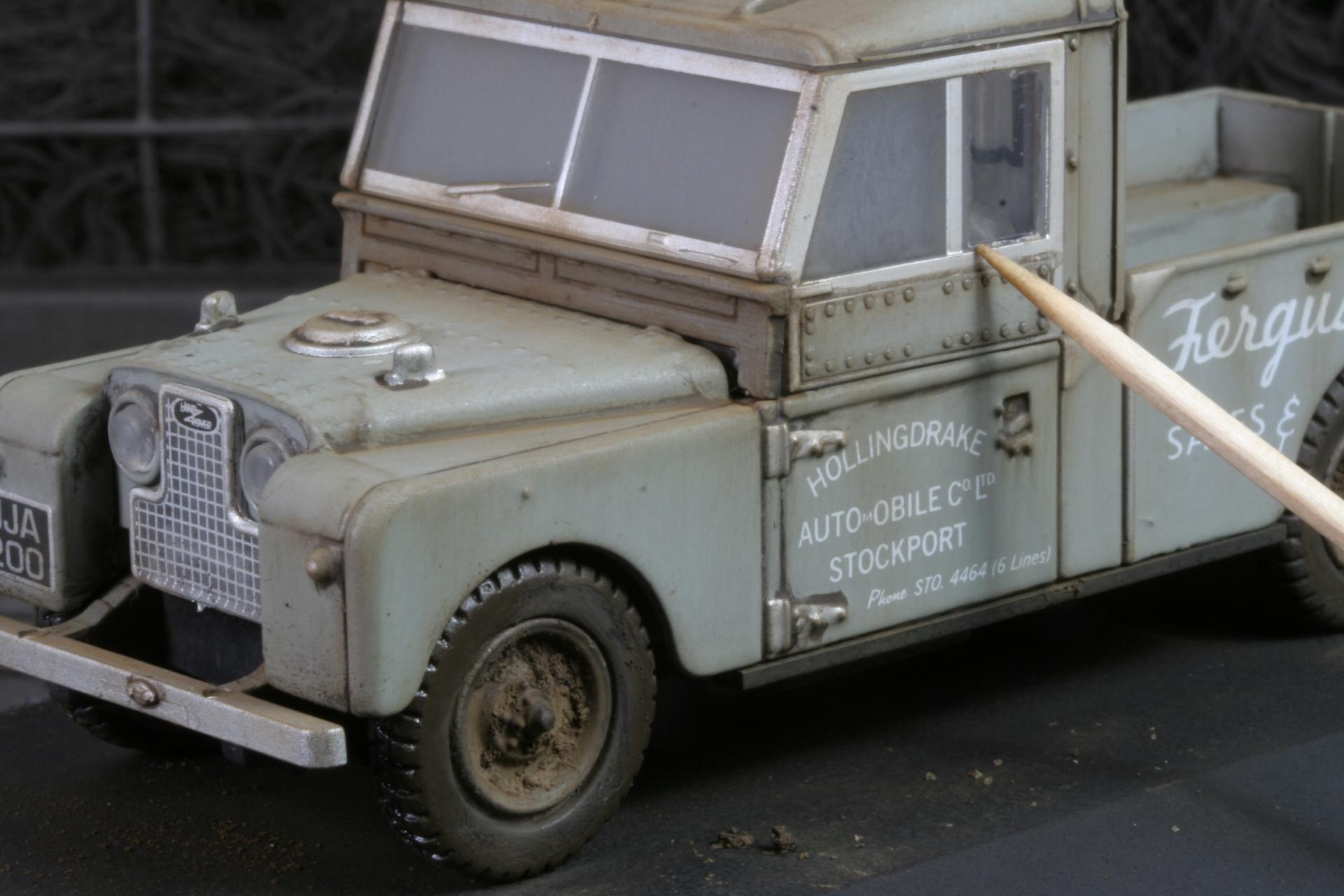 The front wheel and wheel arch have been further treated to show the effects of recently collected mud. In the case of the wheel hub, a dry brush was used to pick off some of the white spirit-infused pigment before the mixture had dried. This excess was wiped off on a paper towel, and the remaining trace of pigment on the brush tip just gently touched onto the wing surface, leaving a trace of discolouration thereon. The rubbed appearance on the tyre sidewall was done by rubbing the thin layer of wet pigment that was there with a damp cotton swab of the Tamiya type. 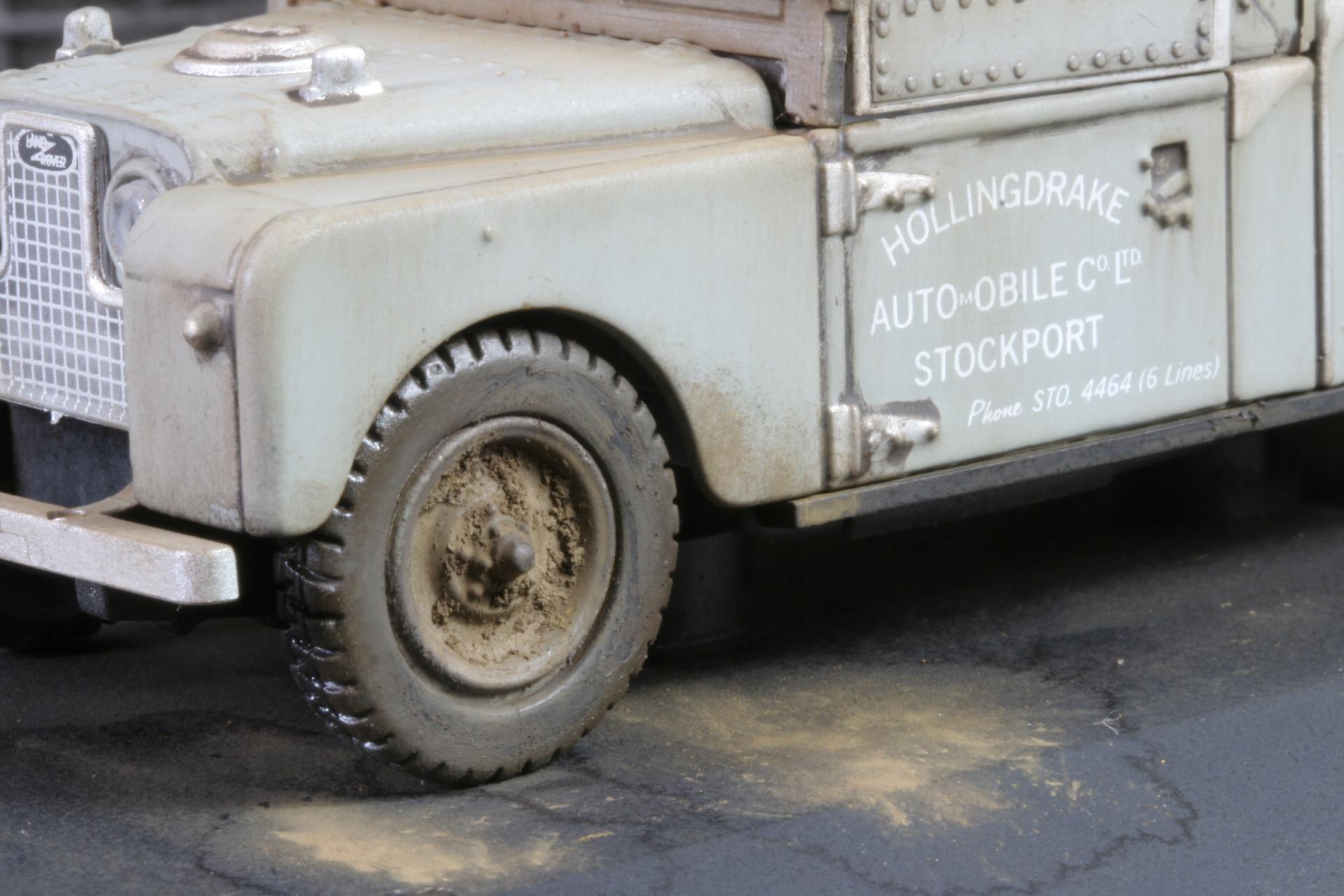 That's all I plan to do with this subject, remembering that it was an exercise in weathering for as little cost as possible/practical.

I have attempted to clear an area of windscreen where the wiper would have cleaned, but on reflection (!) that was not such a good idea. The wheels were only made muddy on one side. 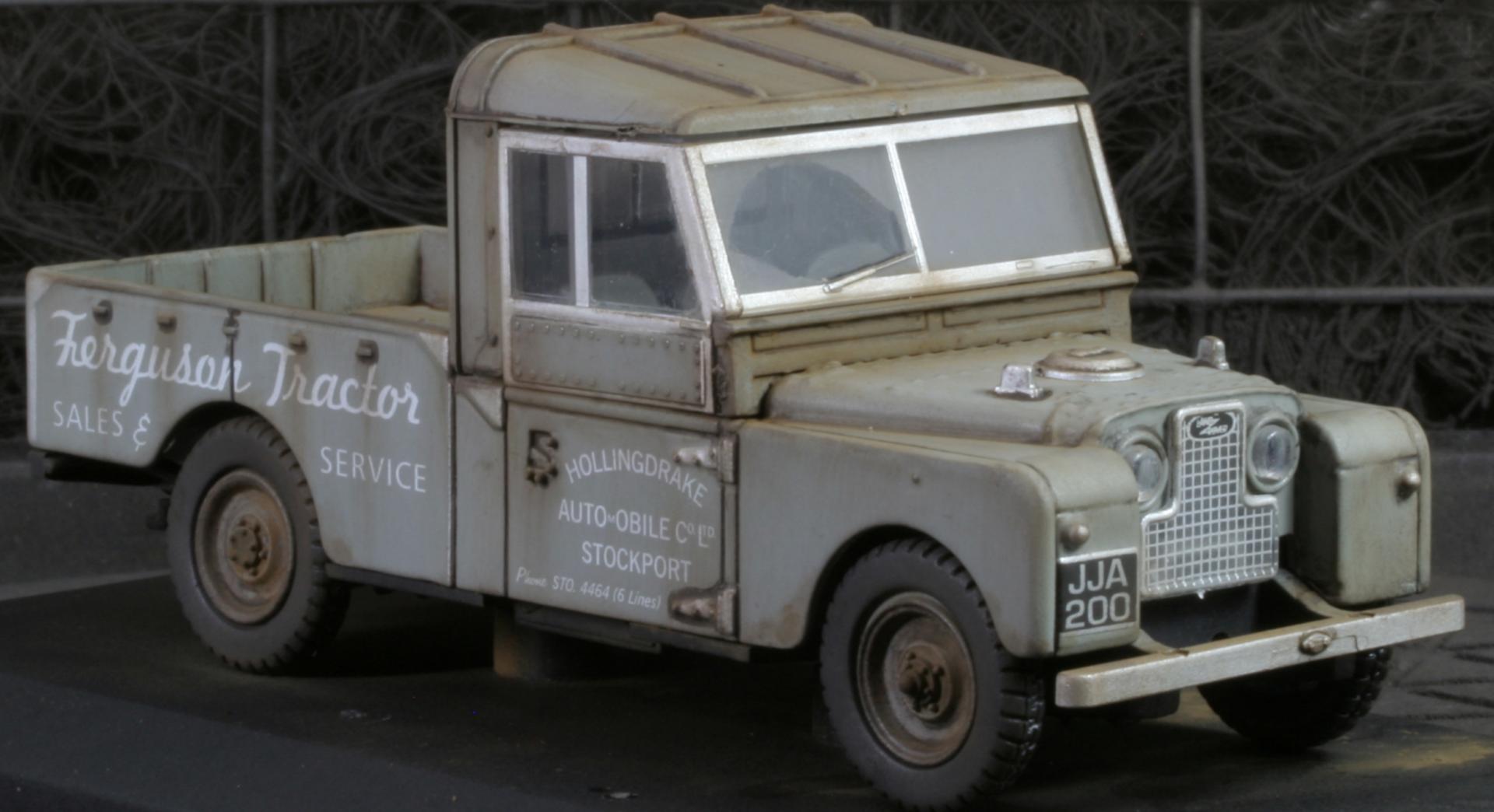 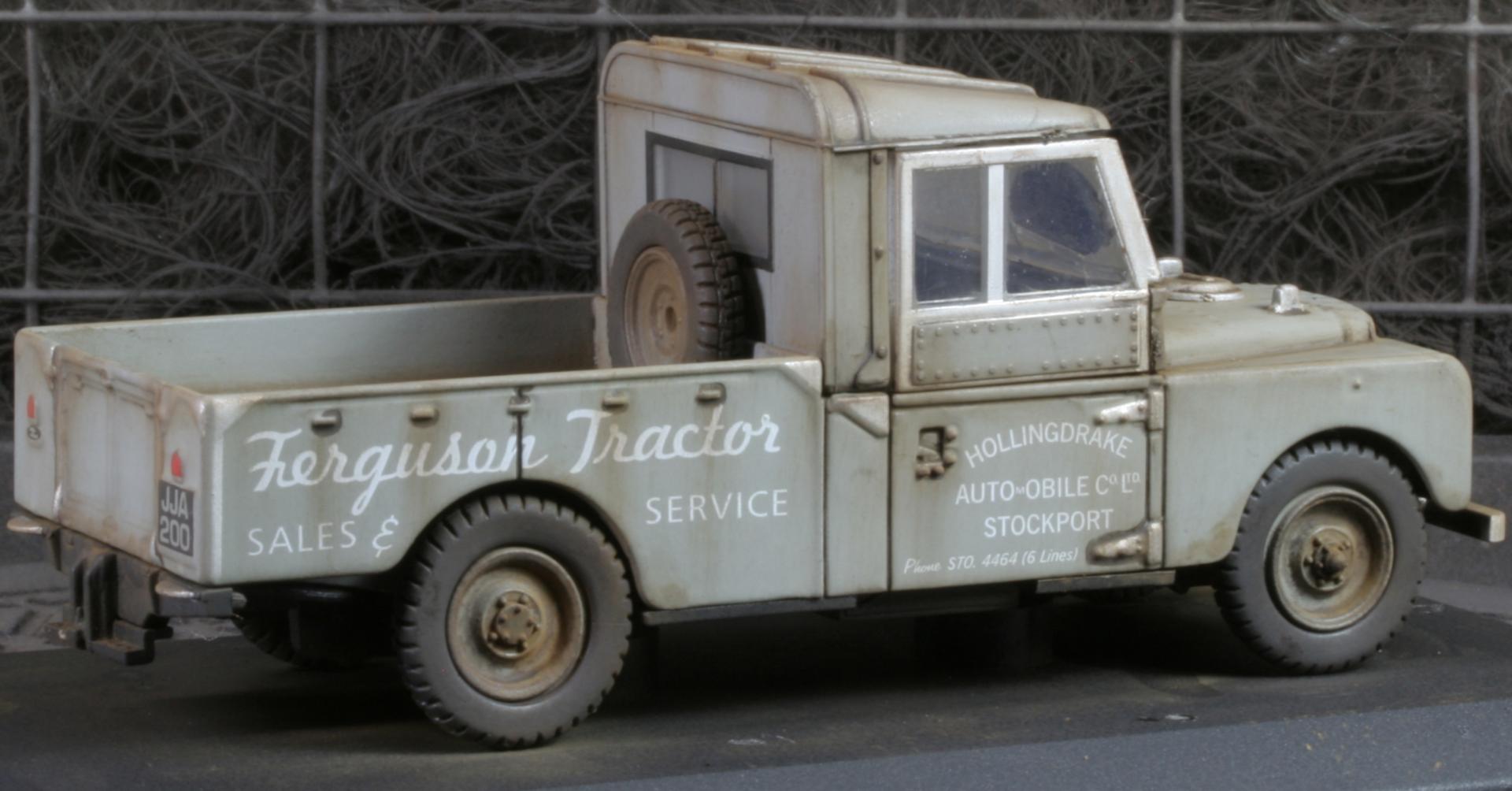 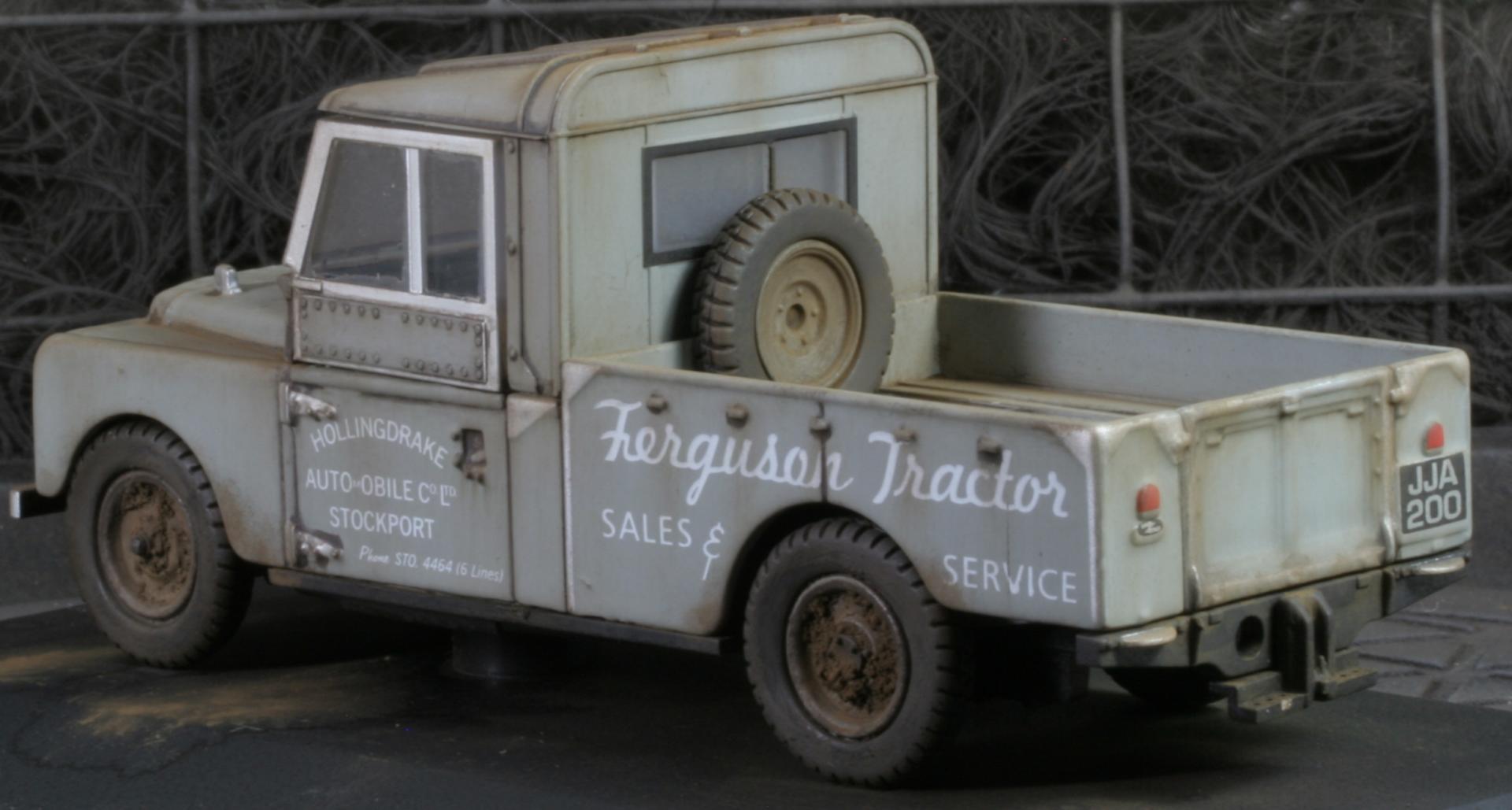 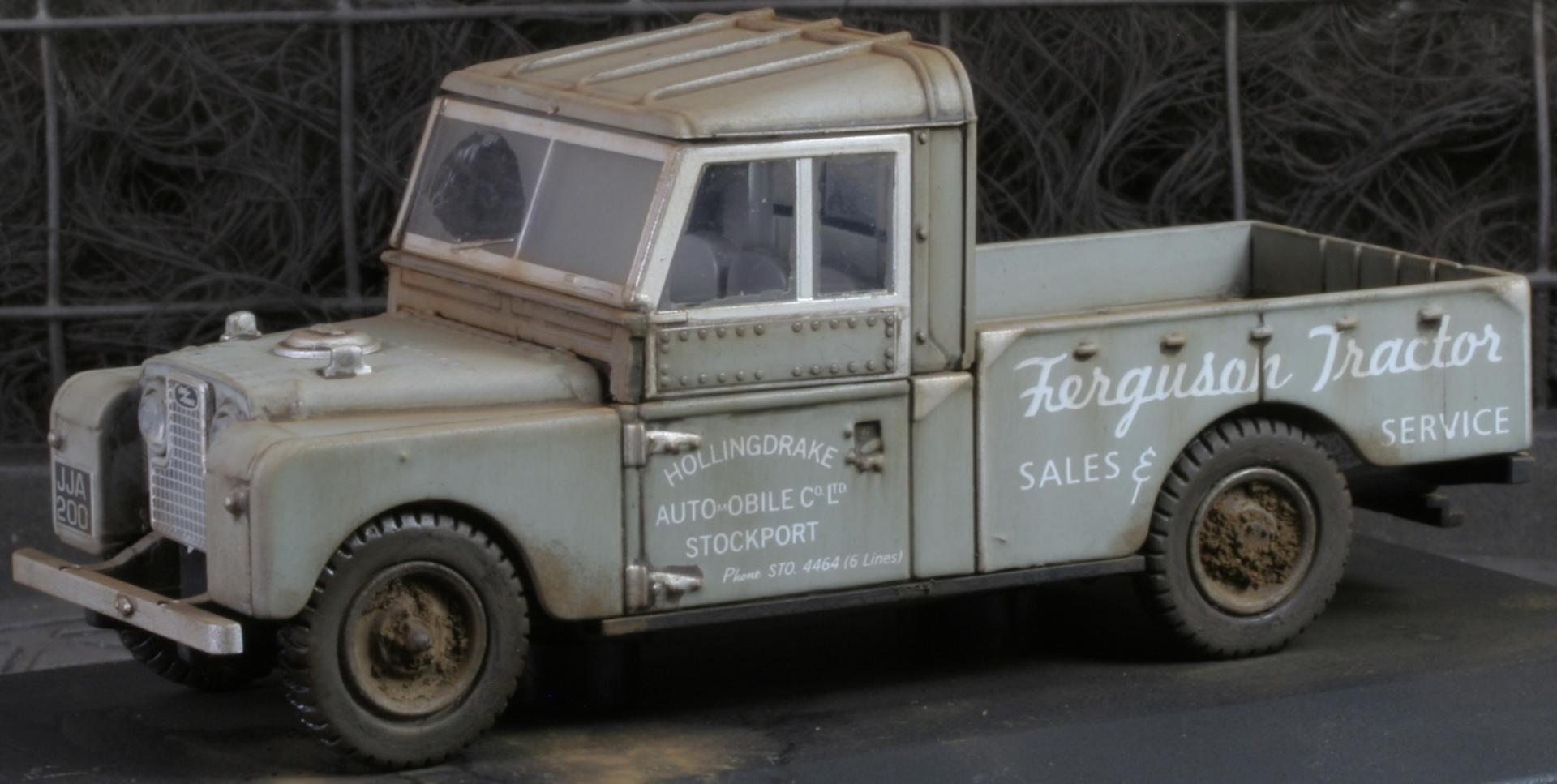 Back to the Weathering room