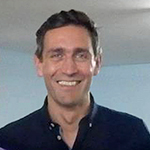 Alan’s first trade was as a draughtsman, initially using traditional methods and progressing to AutoCAD in the early 1990’s. Design and IT have always been Alan’s passions, with his career taking the IT networking route for the last 20 years.

Railways have almost always been part of Alan’s life, being brought up a stone’s throw from the Cambrian mainline in Mid Wales and receiving his first train set aged 6 months. Early years spent at the Severn Valley Railway left a lasting impression and a love for GWR steam. With work and life taking over, Alan rediscovered model railways 3 years ago as an outlet for creative urges, reacquainting himself with 3D modelling and 2D CAD. Using laser cutting, 3D printing and 3D scanning, Alan has applied these techniques to his own modelling project Oswestry Works.

Alan recently left his IT career after being inspired by Bob Gledhill’s 3D printing course at Missenden Abbey, starting his own 3D design and printing business ‘Modelu’ catering for railway modellers. He has demonstrated his 3D scanning equipment at Missenden Abbey and model railway exhibitions around the country.

Alan has a business website: Modelu3D and a blog: Oswestry Works.