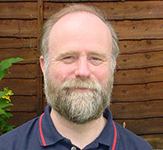 A Lancastrian, Mike has a natural instinct for all things mechanical or electrical making all sorts of models from an early age and acquiring his first electric train set at the age of 8. He built a valve radio in primary school, ‘scratch building’ track and locos in his early teens because he couldn’t afford to buy anything RTR. Modelling was a mix of aircraft, boats and railways with radio and hi-fi construction till completing a four year ‘sandwich course’ at Liverpool Poly. in Electrical Engineering. When he moved to Edinburgh for his first post-grad. job, modelling was put on the ‘back burner’. A Ph.D in Bio-medical Engineering at Strathclyde University was followed by political activity, marriage and two children, along with a career as a lecturer in Aberdeen University.

When his son was 7 he re-kindled Mike’s interest in Railway Modelling and they started a new layout in the loft. Mike’s son moved on to other activities, but his own research (now in Manchester) involved the design of miniature electronics in the medical field. Mike realised he could apply this knowledge to Model Railways; at the same time DCC was becoming popular and the NMRA had produced the DCC Standards. Mike’s modelling interest is American HO and he became a NMRA member, was co-opted onto the NMRA DCC Working Group and joined MERG about the same time. Since then he has developed many circuits which have became MERG kits. Mike was also using the CAN bus in medical equipment and, with others, applied this to model railways in the form of ‘CBUS’ – a general purpose layout control system using just a two wire ‘bus’.

Mike retired in 2006 and model railway electronics has become an almost full time activity. He has tutored at Missenden on the Electronics for Railway Modellers courses for the past 5 years and thoroughly enjoyed it.