A full story for this subject - I remembered to take photographs with my newly serviced camera while doing it. The plan is to weather it in a used but serviced condition, working from a photograph in a book from my reference library.

I'll be using a selection of materials from my usual stock and will hopefully remember to introduce them as the steps progress. Being a small engine it sits quite comfortably on the painting turntable.

The Sharpie is indeed used for removing the bright shiny finish of the wheel rims, and the coupling rods, too. I have found in the past that airbrushed paint on these bare metal surfaces can rub off too easily, and even flake off  if applied too thickly. I read, many years ago somewhere, that this could be prevented by blackening the surfaces before applying the paint. At the time I didn't fully understand the term, 'blackening', and used a marker pen. That looked blue to me, rather than black (yes, I did use a black marker!) so immediately rejected the idea. If I now work on something with bright surfaces that will be airbrushed, I will apply a coat of black (still looks blue to me) from a marker pen before airbrushing starts.

You might be able to see the difference in this photograph, where the wheel rims and coupling rod have been done, but the flanges have not.

Perversely, they look pink in the photograph rather than blue.

Buffer beams get dirty. They're not alone in that, obviously, but this aspect of weathering doesn't always get the attention it deserves, and I include myself there. 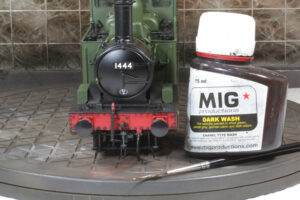 There is much opportunity for detail weathering in O Gauge, so I decided to put a little more effort into this subject by applying a wash to the varied protruberances on the buffer beams. A straightforward process, involving a rigger brush, white spirit and MIG Dark Wash.

The brush bristles are first loaded with white spirit and then dipped into the bottle of wash. The tip of the brush is applied to the edge of a detail (bolt head in this case) and capillary action will take the fliud as far as the consistency permits. The thinner the wash the further it will travel. You should be able to see just where it has been applied by studying the photographs. Note that the colouring will be lighter once the wash has dried, as is always the case with the paints we apply to our models. 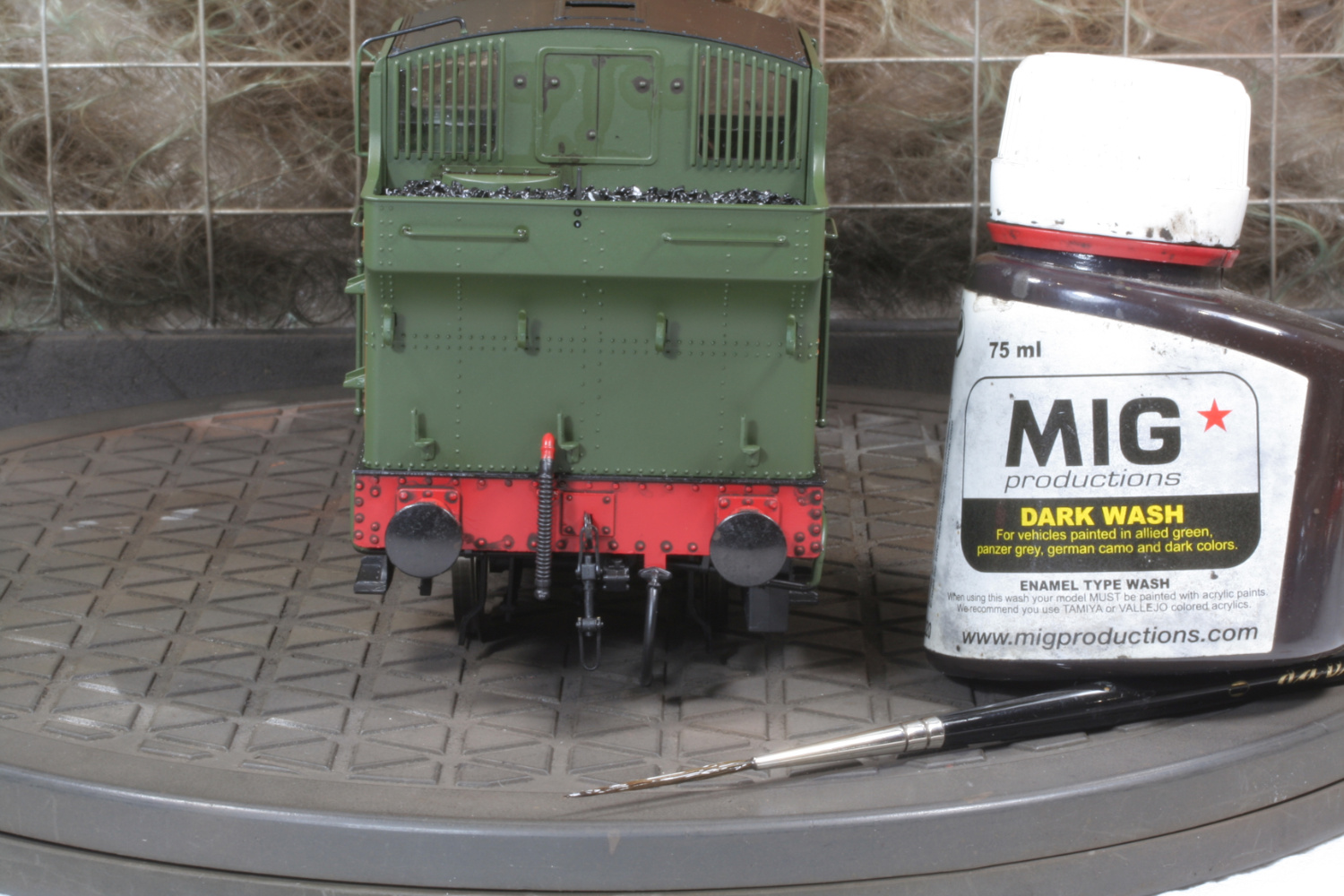 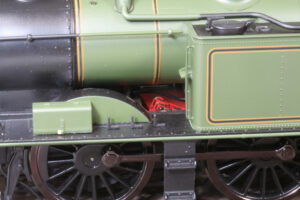 The chassis of this model includes a representation of the inside motion, visible in the gap 'twixt boiler and running plate. It's bright red!

I didn't want to hide this completely, so decided to add a layer of wash to the parts that were visible. The rigger brush was ideal for this task, enabling just enough wash to be deposited. 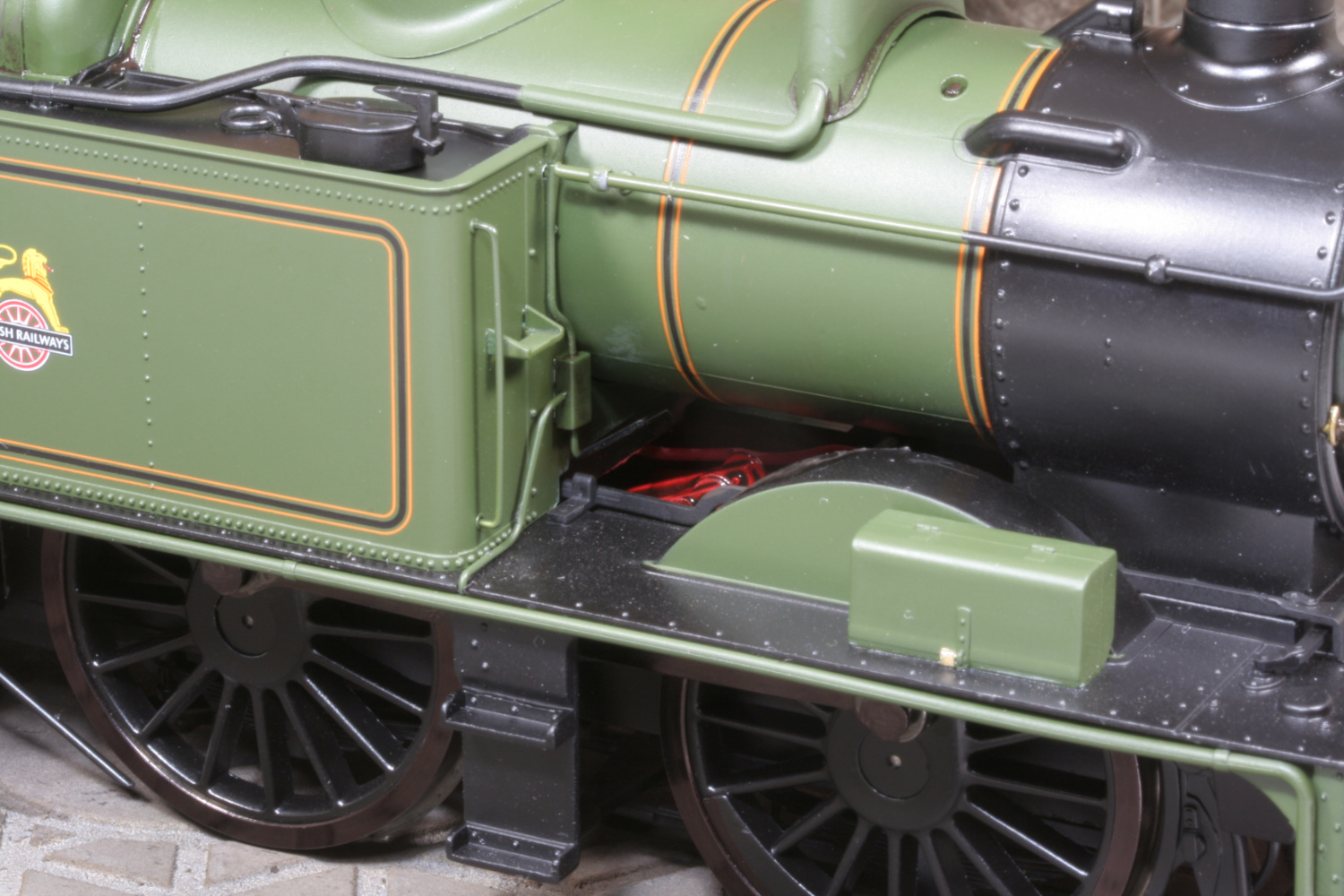 It's the turn of the airbrush now. The inderframe will be discoloured using Railmatch Sleeper Grime, applied with an Iwata Eclipse SBS. The driven wheels are turned while the paint is sprayed, to prevent there being a patchy finish to the rims. With N Gauge and OO/HO Gauge engines this can be done with a PP9 battery, but this doesn't work with O Gauge. I use two pieces of scrap OO Gauge rail screwed into place through a piece of wiring terminal block set at the width of the wheel treads and bent to the width of the battery terminals on the other side.

The wheels are airbrushed first and then the rest of the underparts, not forgetting the buffer beams. 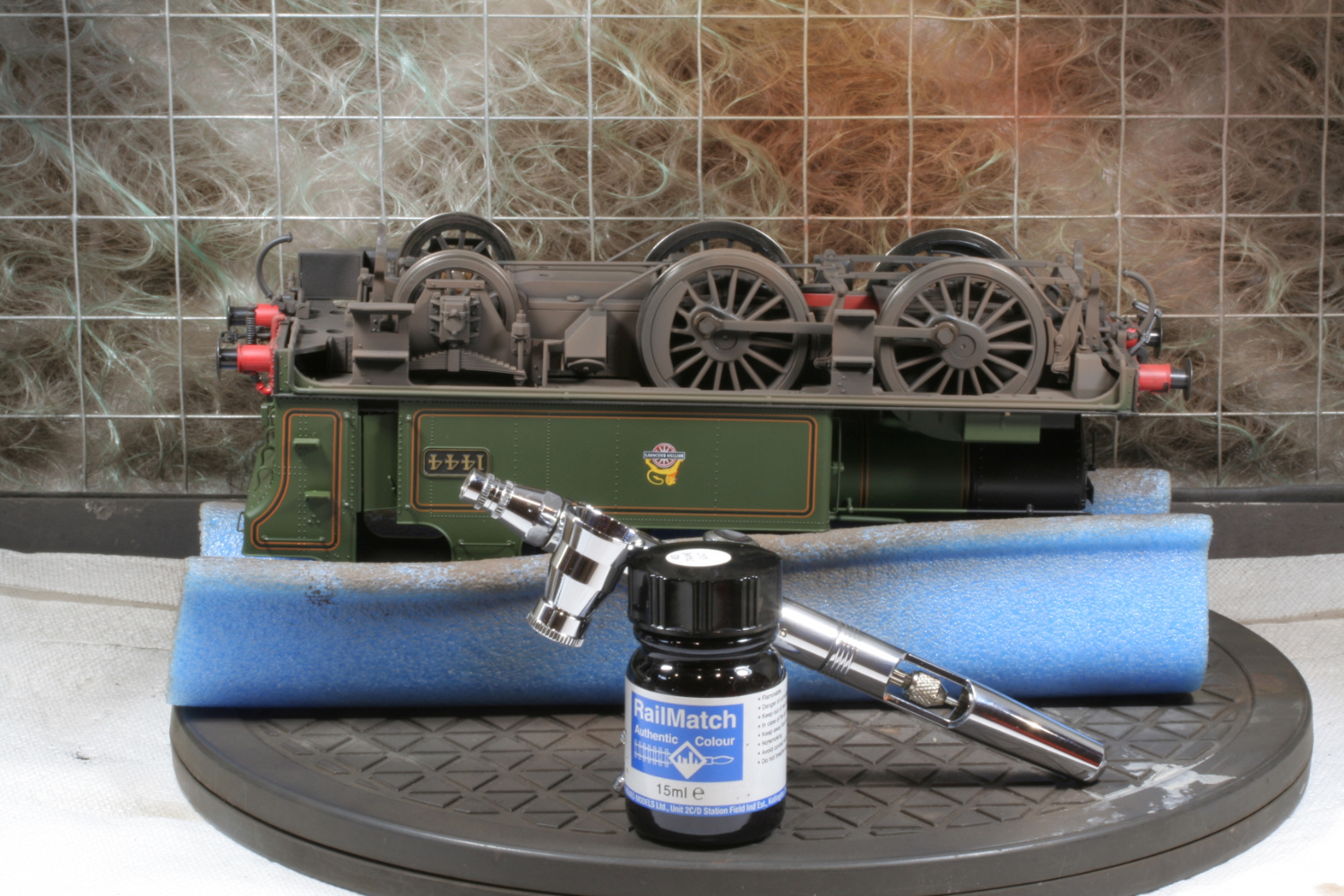 The wheels on the trailing axle are turned by hand. After I thought I had finished I saw from the photographs that I was wrong. I had to return to the spray booth and finish off the patchy bits I thought I had avoided!

Out of the box this locomotive has a rather shiny smokebox, much more so than I would have expected. Before going any further I decided to apply a layer of Testor's Dullcote to that area so that pigments could be applied at a later date and that I could be sure that they would stick.

Dullcote dries very quickly into a usable state. These photographs were taken only two minutes apart.

My masking wasn't very good, so the Dullcote has landed on part of the leading wheels. 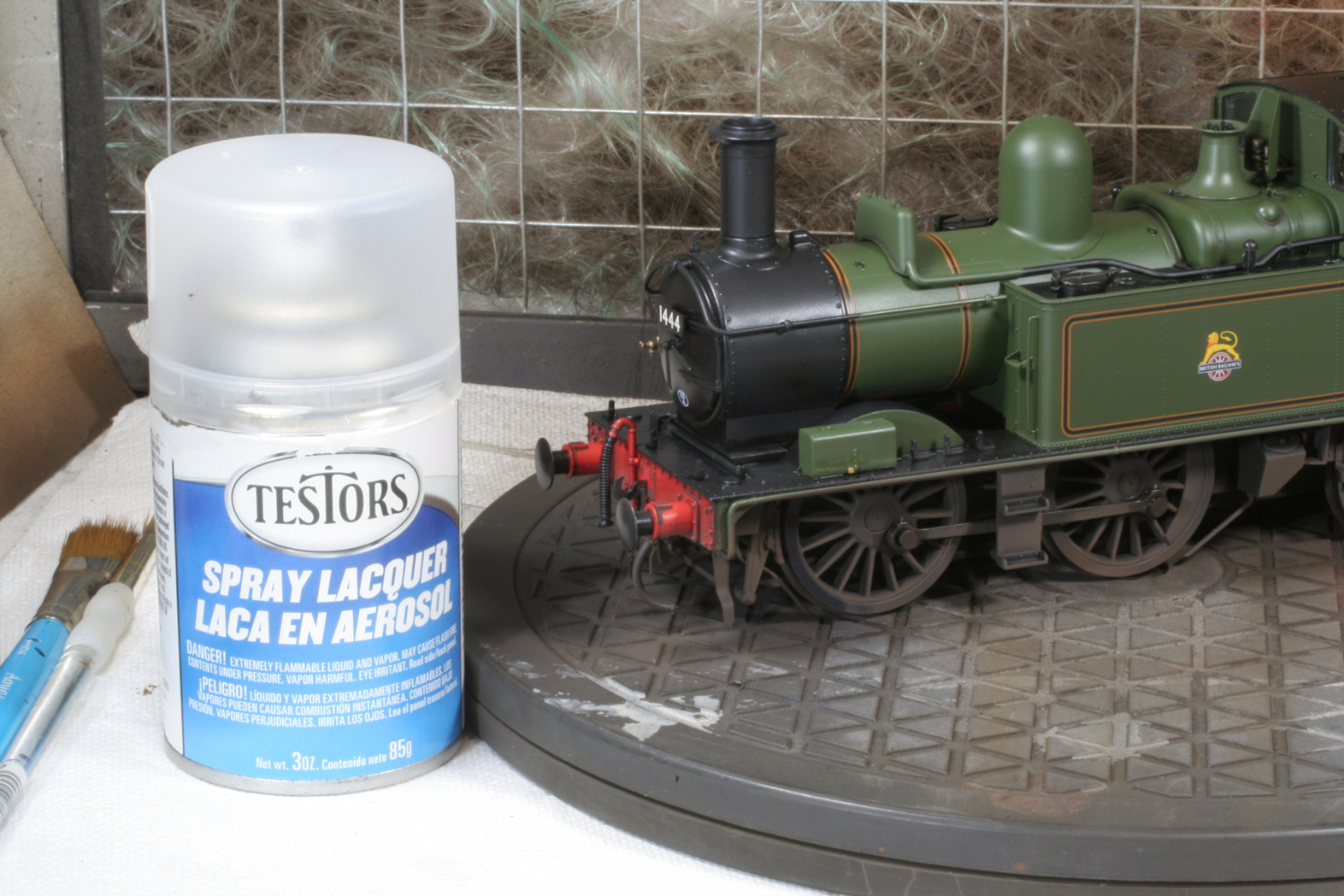 I'll need to load up the airbrush to cover that small patch with another layer of Sleeper Grime. This was a good example of the change in appearance a layer of varnish will make to a carefully planned and coloured area of rolling stock, whether it has been done with paint or pigment.

The cab roof comes off!

Heart in mouth moment when I removed the engine from its wheel-spraying cradle - something fell on the floor. Only the roof, though, not being held in place by the two small magnets any more. This gave me the idea of adding some grime to the easily accessible cab interior, so out came the MIG Dark Wash again and some was applied to the brightly coloured pipework. 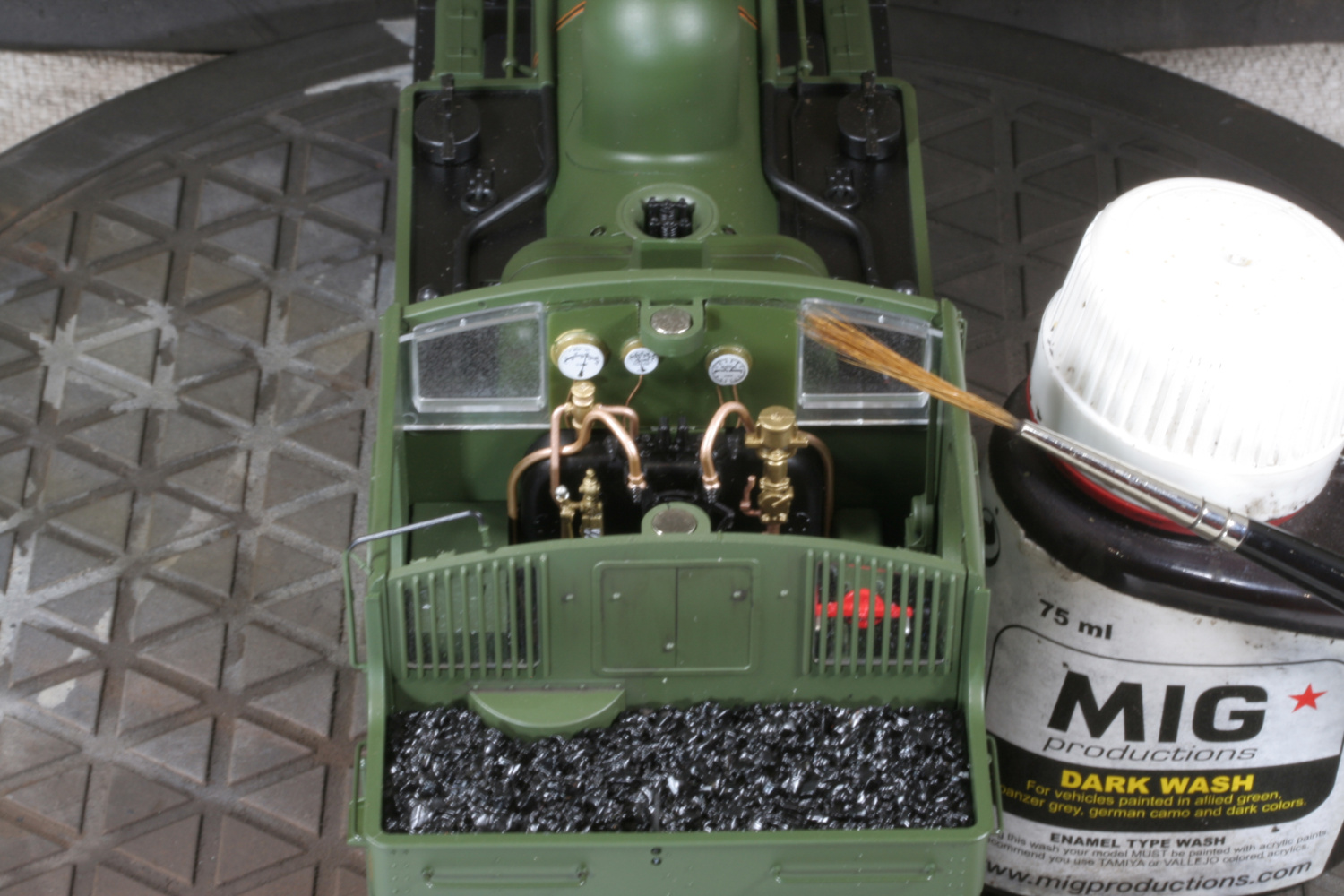 Not covering the whole assembly with grime, but just hinting that there had been some work going on in that area.

Nothing more than a white spirit dampened rigger brush being dipped into the wash and then applied to pipe joins from the tip of the bristles. 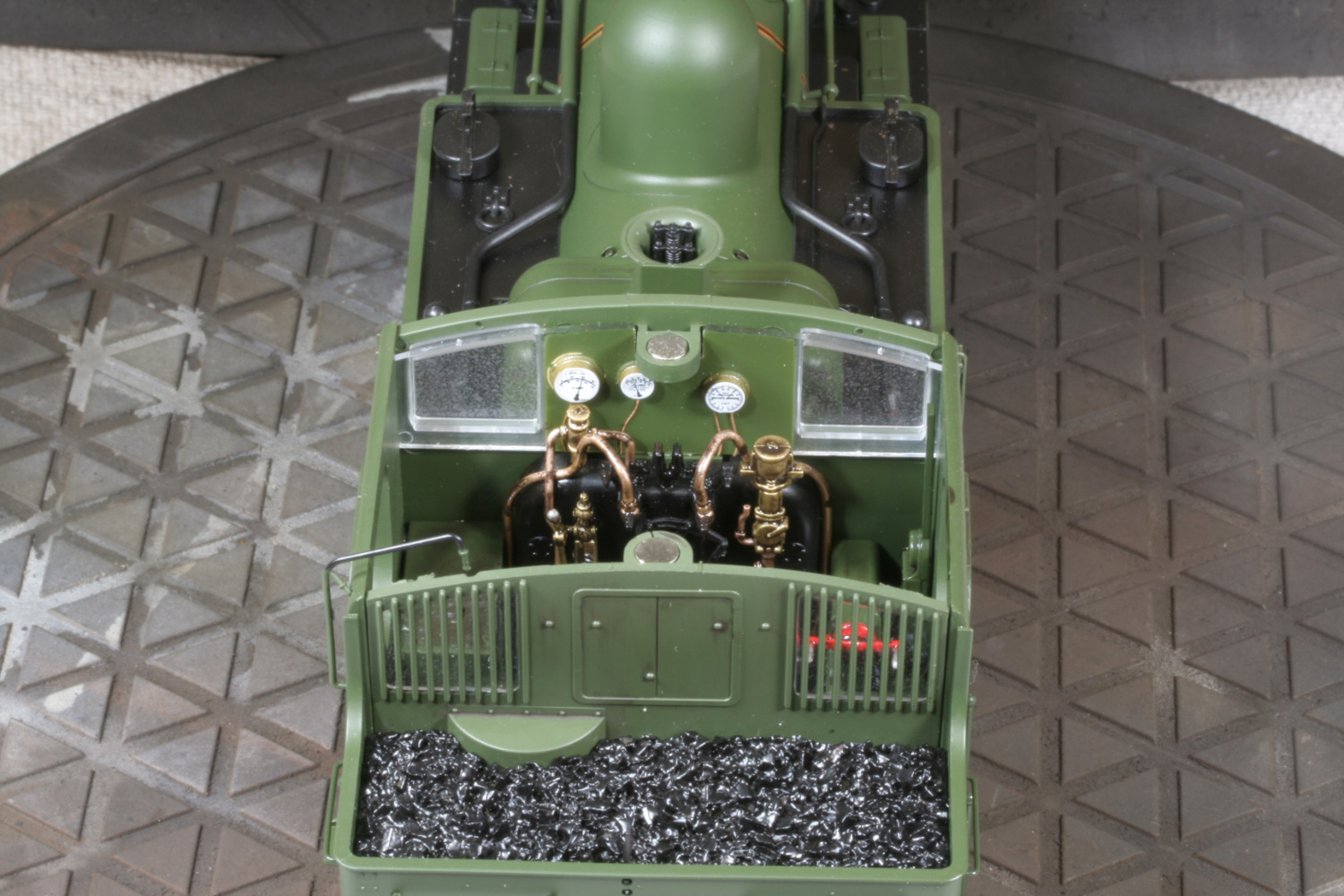 A layer of Sleeper Grime/Frame Dirt mixture was prepared for airbrushing the sides, using more than the usual amount of white spirit. I wanted to be able to apply very thin layers, even thinner than my usual approach. Why a mixture of the two colours? Laziness, basically. My pot of one was empty and I couldn't be bothered to find another. The two colours are so similar that I didn't think it would matter.

The whole of both sides and ends was given a thin application of this mixture and then a wide flat shader brush was used to drag it down the tank sides before it dried compeletely. This was to give an impression of dirt being carried down the side by rain and generous tank filling exercises. 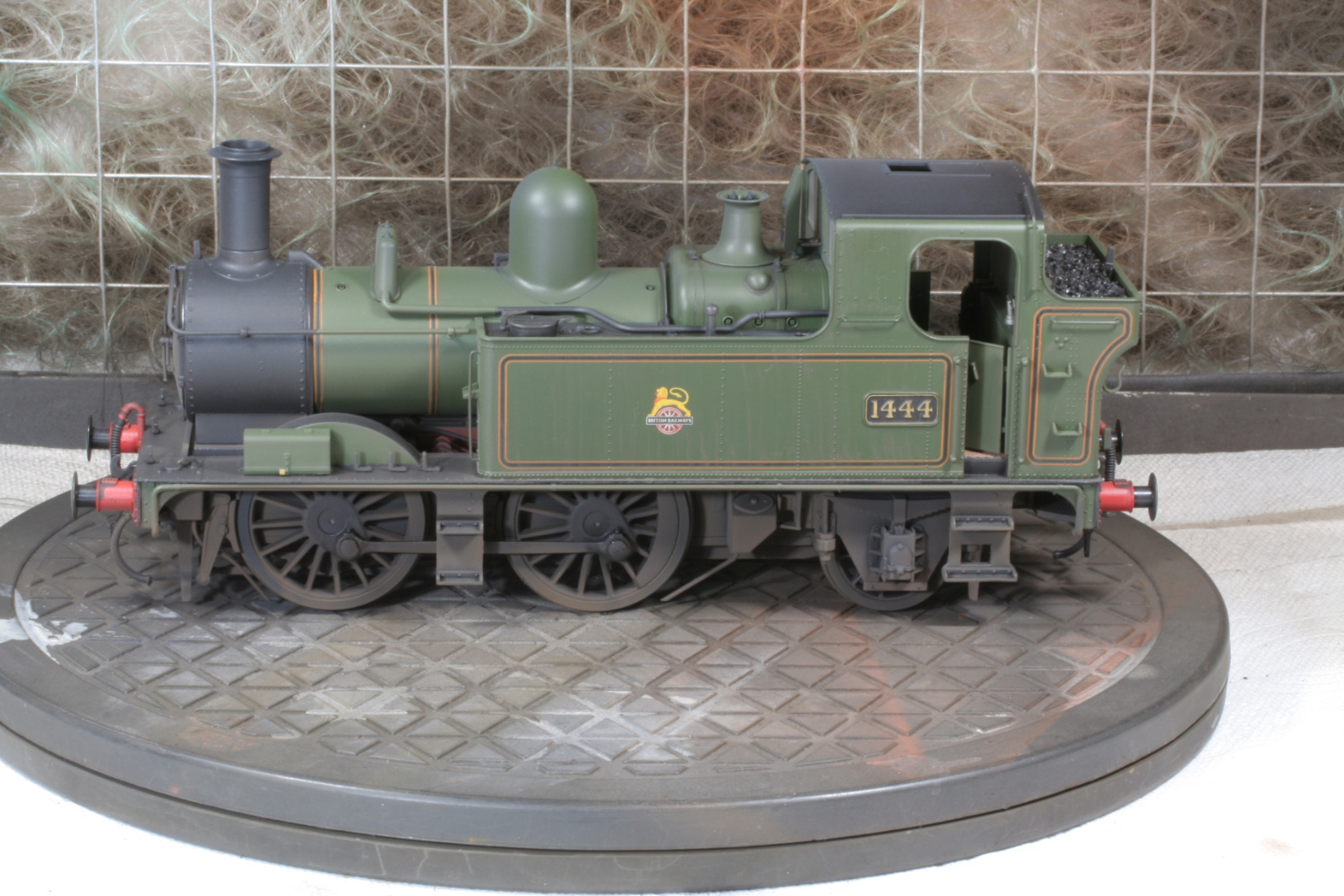 It worked better on one side than it did on the other. 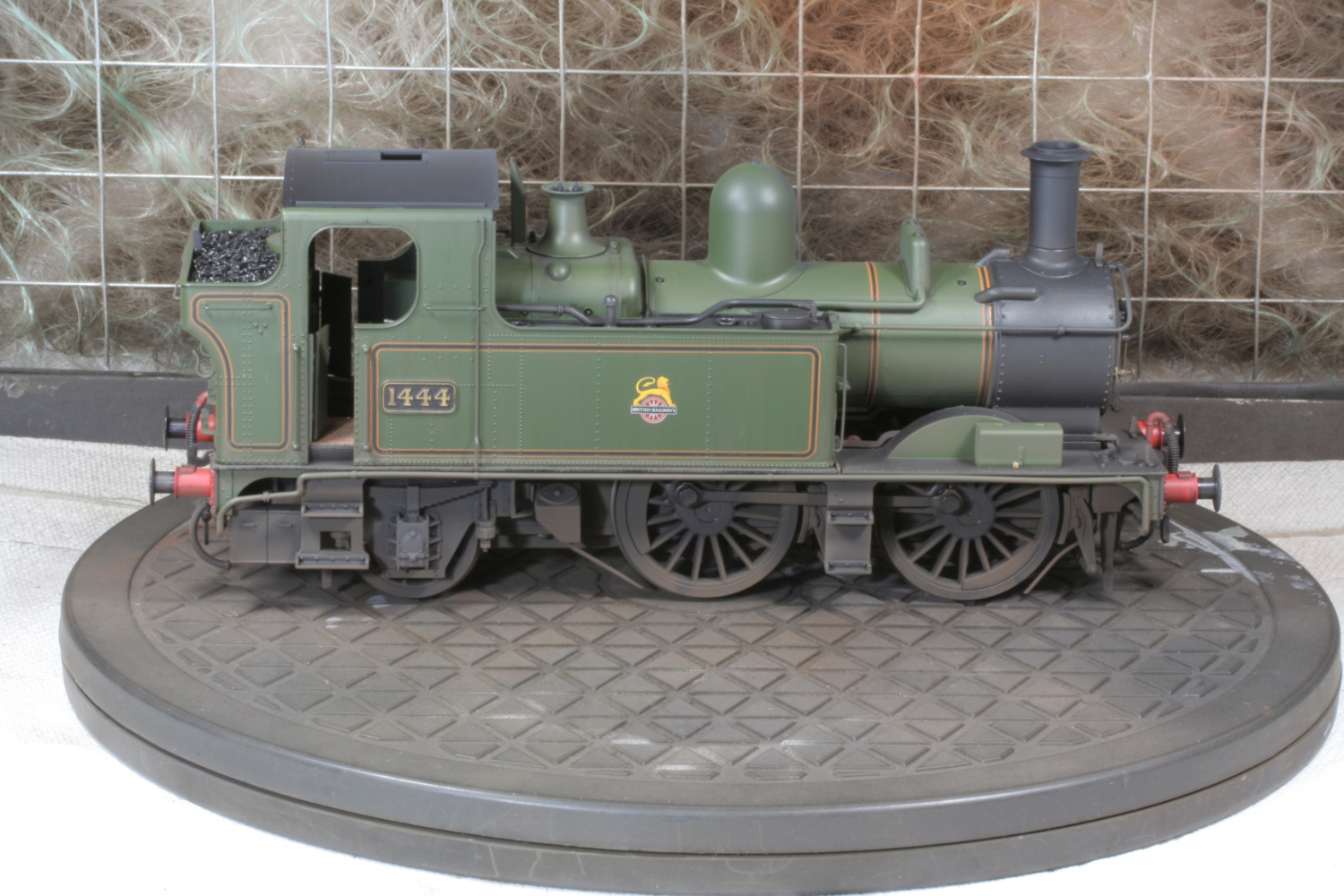 A dark mix of Railmatch Weathered Black and Frame Dirt has been airbrushed over the top of the boiler, the cab roof and the driving wheel centres. This is to represent the soot present on the former two and the oil on the latter. The photograph that I have been using as a reference shows a much more marked contrast between the wheel rims and the wheel centres, but it does not look quite right to my eye so I have reduced the contrast by using a slightly darker shade of brown.

Black Smoke pigment has been used on the smokebox and its door, with a very light application of the same to the front corner and edge of the tanks to show where water continually runs if the filling process means the tanks overflow. 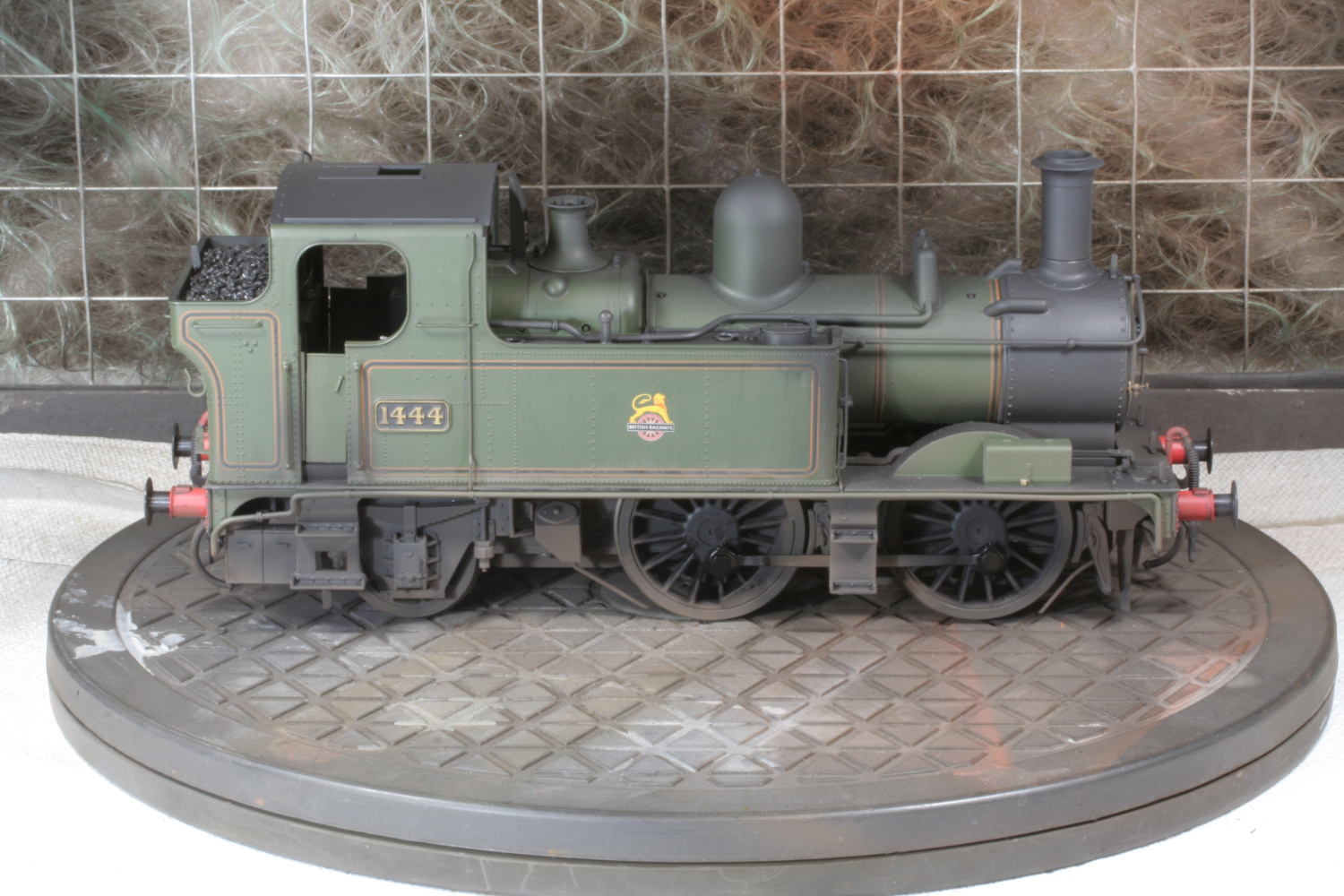 Not far to go now. Thanks for sticking with it! 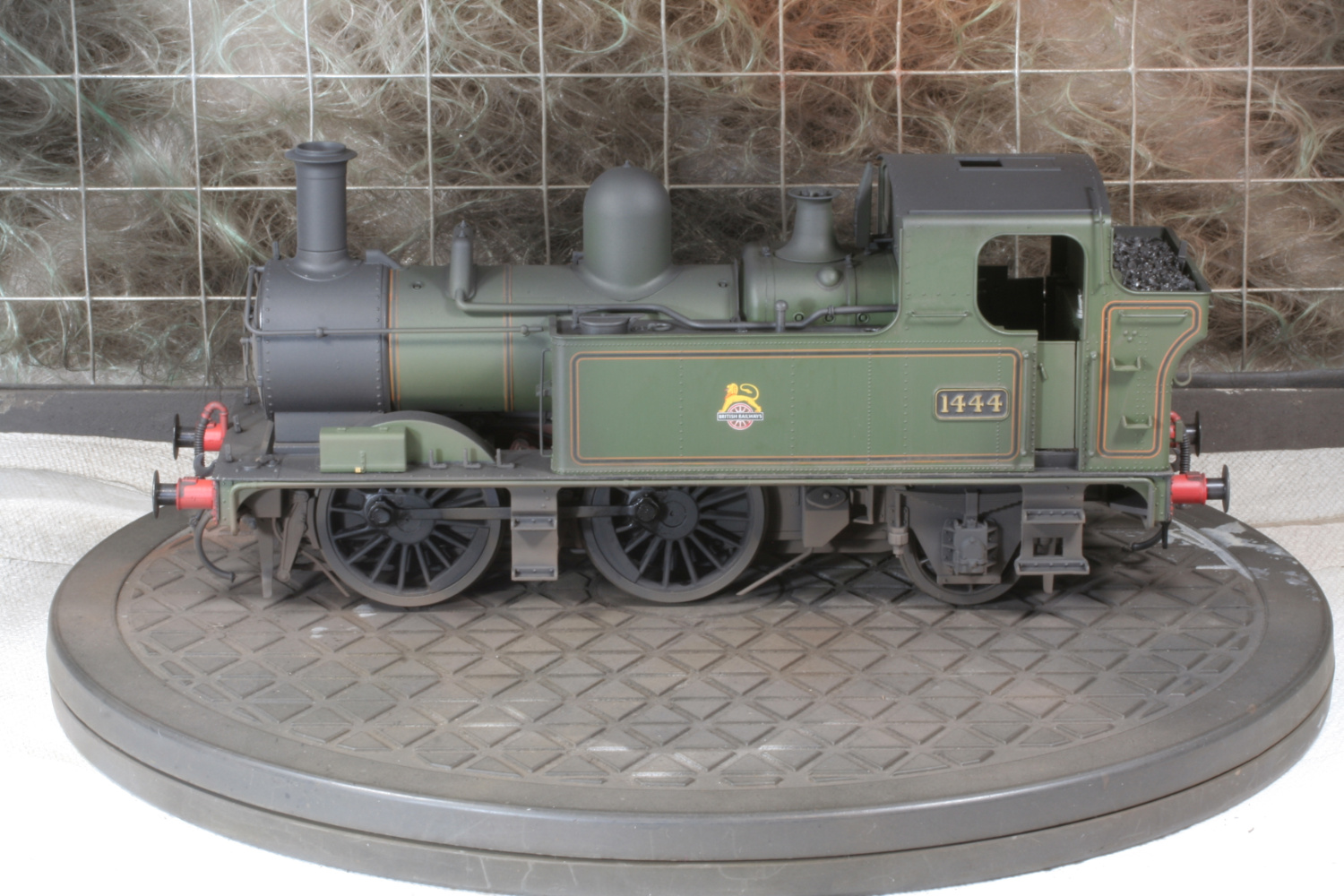