Missenden Weathering Tutor Chris Hopper has just had an article about his latest small exhibition layout “Penmaenbach” published in the December 2021 Railway Modeller. He describes how attending a course at Missenden helped in the development of the layout.

I readily admit that although I had made good progress, building the Grainge and Hodder laser cut boards and laying and wiring up the new PECO Bullhead OO track, this layout was then a little “neglected” for some time. I’m sure many Railway Modellers suffer similar losses of momentum on their projects but I was lucky enough to attend the 2019 Missenden Railway Modellers’ Summer Retreat as a retirement present and this meant that I had a real opportunity to make progress on the layout in a very pleasant location with excellent catering, good company and a well-stocked bar. 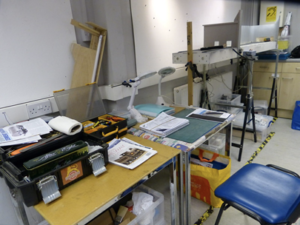 The week needed careful planning and preparation in advance to ensure that I got as much as possible out of the time and that I had all the tools, references and bits I needed to hand but the week went well and was a great opportunity to make progress.

I painted the track using Phoenix Weathered Sleeper and Rusty Rails colours and a cess was added with Busch ash heavily toned down with the real thing from a log burner.

Once dry the track was ballasted with a mix of Woodland Scenics Fine and Greenscenes ballast fixed with PVA directly to the shoulders and then the rest laid dry and then fixed with dilute Matt Medium dropped from a pipette onto the ballast after a spray of “wet water” to break down any surface tension. This is a fiddly job but well worth the effort. My favourite tool is a tee-spoon to both distribute the dry ballast and tap the rails to encourage the ballast to settle off neatly the sleepers. 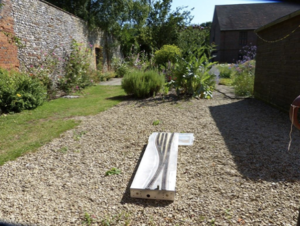 The whole thing was then over-sprayed outside using a light buff/grey enamel paint mix in an airbrush. This had the effect of toning everything down and blurring any sharp edges between colours.

I had already roughly cut out some landscape forms from 50mm insulating foam so these were trimmed to fit around the bridges etc and then covered with ready-mixed filler with added earth coloured paint.

These were finished off at the bench and only fixed in place when the layout was nearly complete. A combination of Gorilla Glue (the water activated version) and cocktail sticks set into holes in the baseboard surface helped hold everything in place. 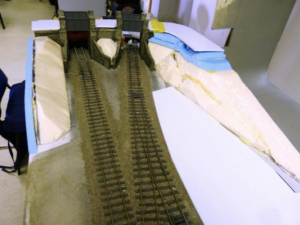 I had almost finished the various overbridges and retaining wall before the week using various plastic products including Slater’s stone sheets, Micro-Engineering (US HO) plate girders, Evergreen strip, scratch-built girders and some Wills brick work. At Missenden I was able to spend some time painting these to match – as well as I could – the stone work in various colour photos I had of bridges on the North Wales main line around locations such as Abergele and Llandudno Junction. I had already been impressed by the work done by Karl Crowther on the stonework on his Hebble Vale Goods EM layout in an article in Model Railway Journal so I tried to follow his methods. I’m quite pleased with the way the stonework turned out.

I had made a platform carcass for the “main” line from some thin bass word. The platform front would not usually be visible but I finished the front with brick paper and prepared a top surface with stone flag edging and an ash surface. Road surfaces were templated with paper and then cut from Daler mounting board and I also constructed some background structures.

Working with a group of fellow-modellers was also a great opportunity to get the self-adhesive photographic backscene fitted. I think it took 3 or 4 of us to do it properly. 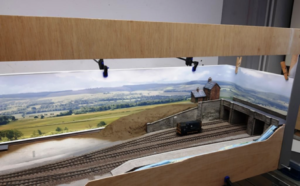 The week was a few years before I took on a tutor role myself and I was helped enormously by the resident tutors Barry Norman and Tony Gee as well of course by my fellow weathering enthusiast – the late Mick Bonwick.

I was very pleased with the experience I had and the work I did at Missenden and once back home carried on with various jobs to maintain progress as I was hoping to exhibit the layout in the first half of 2020. But as we all know that’s another story…